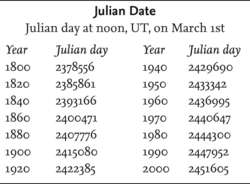 (JD) The number of days that have elapsed since noon GMT on Jan. 1 4713 bc – the Julian day number – plus the decimal fraction of the day that has elapsed since the preceding noon. The consecutive numbering of days makes the system independent of the length of month or year and the JD is thus used to calculate the frequency of occurrence or the periodicity of phenomena over long periods. The system was devised in 1582 by the French scholar Joseph Scaliger. A specific Julian date can be determined from astronomical tables of Julian day numbers: thus since March 1 1980, noon GMT, is tabulated as day number 244 4300 then March 17 1980, 6 p.m. GMT, is JD 244 4316.25 (see table). The modified Julian date (MJD) is found by subtracting 240 0000.5 from the Julian date.
Collins Dictionary of Astronomy © Market House Books Ltd, 2006

[′jül·yən ¦dāt]
(astronomy)
The sum of the Julian day number and the fraction of a day elapsed since the previous noon.
McGraw-Hill Dictionary of Scientific & Technical Terms, 6E, Copyright © 2003 by The McGraw-Hill Companies, Inc.

A calendar notation in which the date is represented by one number. For example, the Julian date for December 11, 1942 is 2430705; while December 12, 1942 is 2430706. The Julian date is widely used with computers because it requires less programming to compare dates that are single integers. Julian numbers are also used within a single year; for example, February 1 is Julian 32.

Developed in the 16th century by Joseph Scaliger, the numbers were based on a 7,980-year cycle that began on January 1, 4713 BC and ends January 22, 3268. Contrast with "Gregorian date," which is the common calendar notation of month, day and year.
Copyright © 1981-2019 by The Computer Language Company Inc. All Rights reserved. THIS DEFINITION IS FOR PERSONAL USE ONLY. All other reproduction is strictly prohibited without permission from the publisher.

Feedback
Flashcards & Bookmarks ?
Please log in or register to use Flashcards and Bookmarks. You can also log in with
Flashcards ?
My bookmarks ?
+ Add current page to bookmarks
Mentioned in ?
References in periodicals archive ?
The morph type (long, mid, or short), and Julian dates of initiation and completion of flowering were recorded for all individuals within the population.
Natural selection on genetically correlated phenological characters in Lythrum salicaria L. (Lythraceae)
Detection increased with playback of barn owl vocalizations, increasing Julian date, and lower background noise (Table 2).
Assessing patterns of barn owl Tyto alba occupancy from call broadcast surveys
The inflection point is the Julian date at which the concavity of the model changes and capture rate begins to slow.
Seasonal phenology of Sirex nigricornis (Hymenoptera: Siricidae) in Arkansas with implications for management of Sirex noctilio
The Julian date can be stored as a 4-byte integer, no more bytes than required by the format MM/DD/YY, and can in theory store a Julian date, if the integers are unsigned, up to 4294967295.
The date crisis
The survival function for the Kelowna population in the third generation of 1993 has an intermediate peak in survival probability near Julian date 270, and very low survival at the highest TF dates (Fig.
Phenotypic selection by parasitoids on the timing of life history in a leafmining moth
It was subject to the effects of release sites (F = 2.0, df = 12, P = 0.03) and the interaction between release site and Julian date (F = 2.1, df = 12, P = 0.03).
Establishment of the West Indian fruit fly (Diptera: Tephritidae) parasitoid Doryctobracon areolatus (Hymenoptera: Braconidae) in the Dominican Republic
Astronomical programs are fairly immune to millennium problems because they are designed to operate well into the past and future and perform calculations based on Julian Date, the number of days since January 1, 4713 B.C.
Confronting the Year 2000
Similarly, pages by Ontario's Hamilton Amateur Astronomers (http://www.science.mcmaster.ca/HAA/) will calculate Julian date and astrophotography exposure times.
Cruising the club scene
Julian dates can be found from the numbers just after the month names on the chart's left.
What's in the sky tonight?
Calendar days of the arrival and departure of flocks were converted into Julian dates (1 for 1st July) with correction for leap- years.
Effect of Weather Conditions on Dynamics of the Black-headed Gull, Chroicocephalus ridibundus, Wintering on Jakusevec, Zagreb City Rubbish Dump
In cooperation with the FDA, Cal-Maine immediately notified its customers and recalled specific Julian dates of shell eggs because they have the potential to be contaminated with SE.
"Egg recall"
Such as "C" equals change Julian dates by two days forward and once the pro-word "Corona" is called over the FM all know what to do.
Tactics, tips, procedures from observer controllers