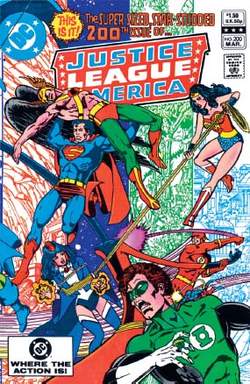 Just imagine! The mightiest heroes of our time … have banded together as the Justice League of America to stamp out the forces of evil wherever and whenever they appear!” So screamed the text of a DC Comics house advertisement in 1960, promoting The Brave and the Bold #28 (March 1960). In that story, the first superhero team of the Silver Age (1956–1969) was established, and Wonder Woman, Aquaman, Flash, Green Lantern, Martian Manhunter, and even Superman and Batman came together as a group to fight crime. Their legacy would last well over forty years to the modern day. And the current Justice League of America, now known as JLA, still contains the same members, even if some faces behind the masks have changed.

The Justice League was the brainchild of DC editor Julius Schwartz, who saw the smash revivals of Flash and Green Lantern as a time to update and reintroduce one of DC’s most venerable older superhero groups, the Justice Society of America. Schwartz wanted the new group to have a different name, as he related in The Amazing World of DC Comics #14 (1977) when he said, “To me, ‘Society’ meant something you found on Park Avenue. I felt that ‘League’ was a stronger word, one that the readers could identify with because of baseball leagues.” Schwartz assigned famed Golden Age (1938–1954) sci-fi writer Gardner Fox to script the new series, and artists Mike Sekowsky and Bernard Sachs to illustrate the book. After two further issues of The Brave and the Bold, the JLA was awarded its own title with Justice League of America #1 (November 1960).

The early Justice League of America stories showcased the creative team’s ability to introduce exciting new villains, such as Starro the starfish alien conqueror, power-stealing android Amazo, mesmerizing three-eyed alien Despero, tubby Professor Fortune, magician Felix Faust, Dr. Light, the Royal Flush Gang, Queen Bee, and many others. At the group’s mountain hideaway “Secret Sanctuary”—outside Happy Harbor on the East Coast—hot DC stars were welcomed in as new members. Green Arrow joined in issue #4 (May 1961), while the Atom came along in #14 (September 1962). The team even had a hip-speaking teen sidekick named Snapper Carr, who managed to help his super-buddies often.

The origin of the JLA wasn’t revealed until issue #9 (February 1962), wherein the team members fought alien champions from the planet Appellax. But the most memorable stories from the Justice League’s early days came with issues #21-#22 (August-September 1963), which saw the heroes reuniting with their forebears, the Justice Society of America. As had been seen in The Flash #123 (September 1961), the JSA lived on Earth-Two, while the JLA lived on Earth-One. Piercing the barrier between the Earths enabled the two teams to fight super-criminals together. The team-up proved so popular that the stories—most of which included the word “Crisis” in their titles—became a yearly event in Justice League of America.

Fox and Sekowsky left the series in 1968, and writer Denny O’Neil and artist Dick Dillin came aboard as replacements. Dillin penciled 120 consecutive League issues until his death in 1980, whereupon George Pérez and other artists took over. More heroes joined or were offered honorary memberships in the JLA, including Hawkman, Black Canary, Elongated Man, Red Tornado, Hawkgirl/Hawkwoman, Zatanna, Firestorm, the Phantom Stranger, Adam Strange, the Creeper, Metamorpho, Sargon the Sorceror, and others. Some resigned or took leaves of absence, including Green Arrow and Wonder Woman. The team moved their headquarters from the mountain to an orbiting satellite, constructed using Thanagarian technology (from Hawkman’s home-world) and requiring members to use transportation tubes to gain entrance.

In 1984, the Justice League of America series was radically revamped. The team disbanded after a Martian attack, and then reformed with Aquaman as the leader. Headquartered in a bunker in an abandoned Detroit factory—and later in the original mountain base—this Justice League was full of newcomers such as animalistic Vixen, second-generation strongman Steel, chameleon-like Gypsy, breakdancer Vibe, and a few old-timers. The team didn’t click with readers for very long, and Justice League of America was canceled with issue #261 (April 1987).

A few appearances passed by, and another series was launched with a shorter-titled JLA issue #1 (January 1997), written by one of comics’ leading names, Grant Morrison, with art by Howard Porter (though the characters in the book still referred to their group by its full title most of the time). This time the big guns were brought back to confront earth-shaking menaces and galaxy conquerors, as they had at the beginning; unlike the one-issue Silver Age tales, however, these stories usually took four to six issues to tell. “Hot” creators came and went on the series; JLA held its own in sales. This time the lineup included Superman, Batman, Wonder Woman, Aquaman, Flash, Green Lantern, and Plastic Man, although membership would grow and expand to include many of DC’s large roster of heroes, including Huntress, Steel, Zauriel, Aztek, Tomorrow Woman, Orion, and many others. More recently, a new Hourman, Faith, and Manitou Raven (a redesign of cartoon Super Friends member Apache Chief) have joined. This League operated from the Watchtower, a high-tech base on the moon, and ex-Batgirl Oracle helped them with information for their missions.

With its own series a solid seller for DC Comics, JLA was free to branch out again. A maxi-series of JLA: Year One (1998) retold the formative year of the team, retroactively inserting Black Canary in Wonder Woman’s spot, according to revised DC continuity. In 2003, a miniseries called Formerly Known as the Justice League reunited the “comedy-era” team of DeMatteis, Giffen, and Maguire to relate new adventures of the second-rate squad. The series was a surprise sales hit, and further volumes were announced. Writer Paul Dini and painter Alex Ross also delivered a treat to fans with the tabloid-sized JLA: Secret Origins (2002) and JLA: Liberty and Justice (2003). And a new comic book series debuted in January 2002; based on the popular Justice League cartoon series, this comic targeted a younger audiences, and was titled Justice League Adventures.

Following the success of Batman: The Animated Series and Superman: The Animated Series, Bruce Timm, Paul Dini, and Alan Burnett pitched a Justice League series in 1998. The following year, Warner Bros. commissioned the show for the Cartoon Network. Justice League played it straight when it debuted on November 1, 2001. The core group included Superman, Batman, Wonder Woman, Green Lantern/John Stewart, Martian Manhunter, Flash, and Hawkgirl. In 2004, the Justice League animated series was revised and retitled Justice League Unlimited; many more DC universe superheroes joined the League in this version, which ran for three more seasons. Since then there have been direct-to-video animated films, including Justice League: The New Frontier (2008), based on writer/artist Darwyn Cooke’s critically acclaimed comics series, and Justice League: Crisis on Two Earths (2010). And a version of the Justice League has appeared on several episodes of the live action television series Smallville, including Aquaman, Black Canary, Cyborg, Green Arrow, Impulse, and the Martian Manhunter.

A new Justice League of America comics series began in 2006, initially written by crime novelist Brad Meltzer, and continued by the late Dwayne McDuffie, who was one of the leading writers of the Justice League animated series. The JLA now had two headquarters: a satellite known as the new Watchtower orbiting the Earth, and the Hall of Justice, in Washington D. C., inspired by the Hall of Justice in the Super Friends TV show.

In 2011, DC Comics announced that it was relaunching its entire line of comics, starting with the new Justice League #1, published on August 31, 2011. Written by Geoff Johns and drawn by Jim Lee, it features a roster including Aquaman, Batman, Cyborg, the Flash, Green Lantern, Superman, and Wonder Woman, among others. —AM & PS

Feedback
Flashcards & Bookmarks ?
Please log in or register to use Flashcards and Bookmarks. You can also log in with
Flashcards ?
My bookmarks ?
+ Add current page to bookmarks
Mentioned in ?
References in periodicals archive ?
A huge amount of titles in the collection dated from the 1960s - the highly collectable Silver Age of comic books - and featured iconic characters including Superman, Spider-Man, Batman, Wonder Woman, The X-Men, The Flash, Iron Man, The Avengers, The Fantastic Four, Green Lantern, Thor, Metamorpho, The Justice League of America, Daredevil and Captain America.
X-appeal as comics go for thousands; Superheroes snapped up at auction
Then there are Superman, Batman, Wonder Woman, Green Lantern, The Flash, Metamorpho and The Justice League of America.
Rare first edition of The X-Men in super sale
After the war he wrote romance, Westerns, sci-fi and horror for the firm, but in the late 1950s he was asked to create a superhero team in response to rival DC Comics' Justice League of America.
Superhero maestro is dead at 95; Spider-Man creator Stan Lee is mourned
It was actually one of the company's conference rooms, which the employees named after the fictional Justice League of America's orbiting space base.
What it takes to build great places for life
The four new series, namely, 'Superman Giant', 'Batman Giant', 'Justice League of America Giant' and 'Teen Titans Giant', will feature material from the last 20 years.
DC collaborates with Walmart for Giant comics
This, however, is just a front to turn public opinion against Earth's more prominent superheroes, particularly the Justice League of America.
'Supergirl': J'onn, Kara Vow To Protect M'gann In Season 2, Episode 11
Orlando will also put his own stamp on DC's flagship series Justice League of America when the comic relaunches on January 4.
Gay (super) power: writer Steve Orlando is helping usher in a new era at DC Comics in which LGBT characters are among the world's greatest superheroes
What makes Fawaz's queer and feminist readings of comics like Justice League of America, The Fantastic Four, and The X-Men all the more compelling is that he cites letters written to the comics' creators and published in the comics' letter columns that demonstrate how readers played an active role in critiquing characters and storylines; for example, he references one letter calling out Stan Lee for writing the Invisible Girl as a passive, almost powerless member of the Fantastic Four, after which Lee greatly increased her presence and abilities in the comic.
Fawaz, Ramzi. The New Mutants: Superheroes and the Radical Imagination of American Comics
And those who were inclined to comment on the very poorly attended Justice League of America meeting walking down the road tended to focus on my colleague.
The Dork Knight rises
Here are new industry revelations about the fanzine, vintage articles about a range of characters from Blackhawk to the Justice League of America, and rarely-seen comics stories by Joe Kubert and others, some collected here for the first time.
TwoMorrows Publishing
"Justice League of America" mostly features lesser-known characters, although some - Green Arrow, Hawkman, Catwoman, the Martian Manhunter - are fan favorites.
Should `Roadrunner' be the state's official rock song?