(ko͞o`blər-rôs`), 1926–2004, American psychiatrist, b. Switzerland. After studying medicine at the Univ. of Zürich (M.D. 1957), Kübler-Ross became a pioneer in the field of thanatology, the study of death and dying. Her influential On Death and Dying (1969) mapped out a five-stage framework to explain the experience of dying patients, which progressed through denial, anger, "bargaining for time," depression, and acceptance. Kübler-Ross was the author of a number of other books on the subject, and her work has had lasting significance among the medical community, who have generally become more responsive to the needs of dying patients and their families. She was also a powerful force behind the movement for creating a hospicehospice,
program of humane and supportive care for the terminally ill and their families; the term also applies to a professional facility that provides care to dying patients who can no longer be cared for at home.
..... Click the link for more information.  care system. 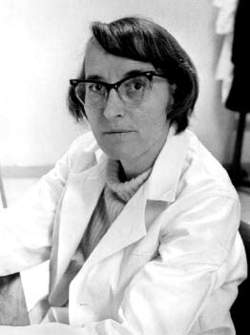 Swiss-born psychiatrist Elizabeth Kubler-Ross revolutionized the way the world looks at the terminally ill with her groundbreaking book, On Death and Dying. AP/WideWorld Photos.

Elisabeth Kübler was born one of triplet sisters in Zurich, Switzerland, on July 8, 1926. Early in her childhood, and against the wishes of her father, she decided on a medical career. She graduated from the medical school at the University of Zurich. It was there she met her husband-to-be, fellow student Emanuel Robert Ross.

After World War II, working with former Nazi concentration camp survivors, she became convinced that something unexpected occurred at the moment of death. This was the first time anyone had seriously considered the process of death. Ross was a member of the International Voluntary Service for Peace, a post-war group that helped in ravaged communities. At the concentration camp Maidanek, she saw butterflies carved into the walls by the prisoners spending their final hours there. Ross adopted the butterfly as her symbol for the transformation that takes place at death.

In 1958, Ross and her husband came to the United States. She worked at hospitals in Chicago, Colorado, and New York. There she found that patients who were dying were treated very poorly, with no one being really honest with them. Many were shunned, and some were even abused. Ross made it part of her job to sit with terminal patients and listen to them. She began giving lectures, at which she would feature dying patients speaking about their thoughts and feelings. Ross said, “My goal was to break through the layer of professional denial that prohibited patients from airing their innermost concerns.”

In 1969, she published her bestselling book On Death and Dying. It made her name known internationally. It is still required reading in most major medical, nursing, and psychology programs. Throughout the 1970s, Ross led hundreds of workshops and helped bring the hospice movement into the mainstream. She was also responsible for the introduction of such things as living wills and home health care. Her “five psychological stages of dying” (denial, anger, bargaining, depression, acceptance) became accepted as common knowledge throughout the world. She founded the Elisabeth Kübler-Ross Center and the Shanti Nilaya Growth and Healing Center and from these she gave “Life, Death, and Transition” workshops. She also continued an ongoing personal interest in mysticism, the afterlife, and unconventional forms of healing.

In the 1980s, she purchased 300 acres in Head Waters, Virginia, and named it Healing Waters. It was to serve as a healing and workshop center. In 1995, at the age of sixty-nine, she retired to Arizona after suffering a series of strokes. A fire had also destroyed her home and all of her belongings. But even in retirement, Ross continued to get visits from people from all around the world, including many celebrities. The March 29, 1999, issue of Time magazine named her one of “The Century’s Greatest Minds.” She settled to anticipating her own death, seeing it as a “transition.” With Spiritualists, she shared a strong belief that “Life doesn’t end when you die. It starts.” After a prolonged illness, Ross died on August 24, 2004, in Scottsdale, Arizona, at the age of seventy-eight. She had published more than 20 books, many of which had been translated into nearly thirty foreign languages. Her books included To Live Until We Say Good-Bye, On Children and Death, AIDS: The Ultimate Challenge, and her autobiography, The Wheel of Life. Her most recent book, Real Taste of Life, was a photographic journal produced in collaboration with her son, Kenneth. She had recently finished drafting her final book, On Grief and Grieving, with longtime collaborator and friend, David Kessler.