Kali (käˈlē) [Hindi,=the Black One], important goddess in popular Hinduism and Tantra. Known also as Durga [the Inaccessible] and as Chandi [the Fierce], Kali is associated with disease, death, and destruction. As Parvati she is the consort of Shiva. Although often represented as a terrifying figure, garlanded with skulls and bearing a bloody sword in one of her many arms, she is worshiped lovingly by many as the Divine Mother. Her cult, popular among many lower castes in India, especially in Bengal, frequently includes animal sacrifice. Kali was patroness of the Thugs.
The Columbia Electronic Encyclopedia™ Copyright © 2022, Columbia University Press. Licensed from Columbia University Press. All rights reserved. 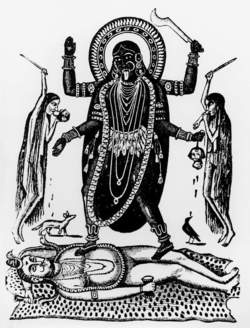 Literally the "the Black One." In Hindu myth, Kali is the destructive aspect of Parvati, consort to Shiva. She is usually depicted draped with severed human heads and trampling on the body of her slain husband. She is simply one aspect of the ultimate goddess, Devi.

She is often called Kali Ma, "the Black Mother," and in addition to being a necessary destroyer, she is also a powerful creative force. Many of her rituals are orgiastic in nature. According to Patricia Monaghan, Kali first manifested herself when the demon Daruka threatened the gods. The great goddess Parvati frowned at Daruka, knitting her brows in fury. From her sprang Kali, armed with a trident. She chased off the demon and made the heavens safe again.

Myths tell of Kali dancing with Shiva, her dancing becoming wilder and wilder. She pauses, but, should she continue, she could shake the world to pieces with her wildness. Despite the seeming negativity of this goddess, she is one of the most popular in India and is adopted by some Witchcraft covens. 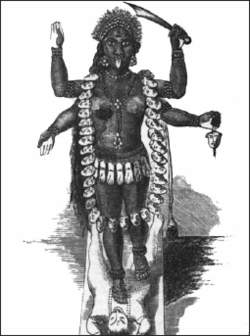 A major deity in the mythology of India, Among other characteristics, Kali was known for her thirst for blood. Kali first appeared in Indian writings around the sixth century C.E. in invocations calling for her assistance in war. In these early texts she was described as having fangs, wearing a garland of corpses, and living at the cremation ground.

Several centuries later, in the Bhagavat-purana, she and her cohorts, the dakinis, turned on a band of thieves, decapitated them, got drunk on their blood, and played a game of tossing the heads around. Other writings called for her temples to be built away from the villages near the cremation grounds.

Kali made her most famous appearance in the Devi-mahatmya, where she joined the goddess Durga in fighting the demon Raktabija. Raktabija had the ability to reproduce himself with each drop of spilled blood; thus, in fighting him successfully, Durga found herself being overwhelmed by Raktabija clones.

Kali rescued Durga by vampirizing Raktabija and eating the duplicates. Kali came to be seen by some as Durga’s wrathful aspect. Kali also appeared as a consort of the god Siva. They engaged in fierce dance. Pictorially, Kali was usually shown on top of Siva’s prone body in the dominant position as they engaged in sexual intercourse.

Kali had an ambiguous relationship to the world. On the one hand she destroyed demons and thus brought order. However, she also served as a representation of forces that threatened social order and stability by her blood-drunkenness and subsequent frenzied activity.

Kali became the dominant deity within Tantric Hinduism, where she was praised as the original form of things and the origin of all that exists. She was termed Creatrix, Protectress, and Destructress. In Tantra, the way of salvation was through the sensual delights of the world—those things usually forbidden to a devout Hindu—such as alcohol and sex. Kali represented the ultimate forbidden realities, and was thus to be taken into the self and overcome in what amounted to a ritual of salvation. She taught that life fed on death, that death was inevitable for all beings, and that in the acceptance of these truths—by confronting Kali in the cremation grounds and thus demonstrating courage equal to her terrible nature—there was liberation. Kali, like many vampire-deities, symbolized the disorder that continually appeared amid all attempts to create order. Life was ultimately untamable and unpredictable.

Kali survived among the Gypsies, who had migrated from India to Europe in the Middle Ages, as Sara, the Black Goddess. However, her vampiric aspects were much mediated by the mixture of Kali with an interesting French Christian myth. According to the story, the three Marys of the New Testament traveled to France where they were met by Sara, a Gypsy who assisted them in their landing. They baptized Sara and preached the gospel to her people. The Gypsies hold a celebration on May 24–25 each year at Saintes-Maries-de-la-Mer, the small French village where the events are believed to have occurred. A statue to Sara was placed in the crypt of the church where the Gypsies have kept their annual vigil.

one of the names for the great goddess (Mahadeva) re-vered in Hinduism, the embodiment of the creative and destruc-tive forces of nature, wife of the god Siva and his femalehypostasis. Kali is honored both in the form of a goddess benevo-lent to people and in a terrible, frightening form. The cult of Kaliis especially widespread in eastern India.

A Linux distribution that is used by security professionals to examine or repair a failed or compromised computer. A major tool in the computer forensics lab, Kali Linux comes with hundreds of penetration-testing utilities. Derived from the Debian Linux root, Kali is often booted from a live CD or live USB. See Linux, Debian, computer forensics and penetration test.
Copyright © 1981-2019 by The Computer Language Company Inc. All Rights reserved. THIS DEFINITION IS FOR PERSONAL USE ONLY. All other reproduction is strictly prohibited without permission from the publisher.

Feedback
Flashcards & Bookmarks ?
Please log in or register to use Flashcards and Bookmarks. You can also log in with
Flashcards ?
My bookmarks ?
+ Add current page to bookmarks
Mentioned in ?
References in periodicals archive ?
As per official record, the said property was under the tenancy of Zakia Sultana who was running Liaquat Girls Middle School in the five rooms attached to Kali Mata Temple dome and open court yard.
ETPB recommends preserving, restoring temple in Moti Bazaar
Kali wallows in a small pond, lies in the shade, and is fed grass regularly.
A birthday wish for Kali
Kali symbolises power and is an incarnation of Goddess Durga.
Kali Puja celebrated in Tripura with full fervour
In 2015 Kali and 14 other goalball players raised more than PS1,600 for her sport in a 170-mile coast to coast tandem ride.
X Factor star attacks city's 02 Institute for refusing blind teen
The video of 'Kali Santro' is a reflective of the song's reverie state, blending comedy and drama in a dream.
Abdullah takes a trip down memory lane with his latest single Kali Santro
Critique: Illustrated with both color and black/white images, "Journeys in the Kali Yuga: A Pilgrimage from Esoteric India to Pagan Europe" is an inherently fascinating, impressively informative, and exceptionally well written account that will prove to be a unique and enduringly popular addition to both community and academic library Religion/Spirituality and Contemporary Biography collections.
Journeys in the Kali Yuga
Kali would be on the streets for months, sometimes crashing at a friend's place, but most of the time in that parking lot, lying in the back of her car, her whole life spilling out of the bags in her trunk.
Kali
Mortar shells fired from the Afghan side also hit houses in a village of Kali Luqman.
Afghan border forces firing claims 11 people in Chaman
Kali suffers a culture shock when she lands on Earth, and she must learn to adapt quickly or die.
Heir to the Sky
The site reported that My Kali's founder Khalid Abdel-Hadi announced the groundbreaking news, calling it "a step to build on the demands of gays who want Arabic-language content."
Jordanian LGBT-focused magazine releases its first issue in Arabic
A tender romance between Kali and Griffin is the thread allowing readers to follow extreme flights of imagination and intricate adventures to the novel's satisfying conclusion.
Sun, Amanda. Heir to the Sky
station along with his team conducted a raid in Chak 468-GB and arrested Muhammad Ali alias Kali (ring leader of Kali gang) resident of Chak 59-GB along with his accomplices - Saleem Barkat resident of Chak 61-GB, Ali Raza resident of Chak 125-GB and Shehbaz Muhammad resident of Chak 124-GB.
Kali gang busted, four arrested