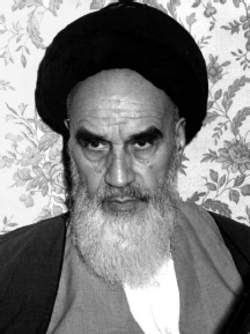 The Ayatollah Khomeini led the Iranian Revolution of 1979 that overthrew the U.S.-supported shah and brought about a new era of Shi’a religious conservatism to the country. Getty Images.

The role of the ayatollah, a title that designates a high-ranking religious leader, in Shi’a Islam became widely known following the Iranian revolution of 1979 and was again widely publicized during the Iraqi War that toppled Saddam Hussein, Iraq’s leader from 1979 to 2003. Ayatollah Seyyed Ruhollah Khomeini, leader of Iran from 1979 to 1989, was born Ruhollah ibn Mustafa Musawi Khomeini Hindi on September 24, 1902, in Khomein, a town some one hundred miles southwest of Qom, Iran.

Khomeini’s grandfather, Seyyed Ahmad, moved from his home in Lucknow, India (hence the word Hindi added to Khomeini’s name) and settled in Khomein. As a young man, Ruhollah Khomeini began to move toward life as a Shi’a clergyman, and he received his higher education at Arak and Qom. Through the 1920s and 1930s he served as a junior clergy in Qom. He advanced in the Shi’a system as he became known as an accomplished scholar/teacher, and he gained the support of many who did their studies with him.

On June 3, 1963, Khomeini delivered a speech in which he attacked the Shah directly. Two days later he was arrested. He was not released from house arrest until April 7, 1964. Several months later Khomeini again denounced the Shah, this time for his pro-American policies, and he questioned the legitimacy of the government. He was again arrested on November 4, 1964, and he was ordered into exile in Turkey. He stayed in Turkey for a year and then moved to the Shi’a center at al-Najaf in Iraq. While there he authored a book on his understanding of government and leadership in the Islamic community.

Facing unrest from the Ayatollah’s supporters in Iran, the Shah acted to have him removed from Iraq. In 1978 Khomeini moved to Paris, which had the effect of making him much more accessible to the world’s media. His following in Iran continued to grow, and by January of 1979 the Shah’s position had become untenable. He withdrew, and on January 31 Khomeini returned to Iran. Over the next ten days he organized opposition to the token government that the Shah had left in place. That government fell on February 12.

A referendum held at the end of March indicated massive support for an Islamic republic. Thus, April 1, 1979, was proclaimed by Khomeini as the first day of the government of God. He was named Imam as the highest cleric in Shi’a Islam. When the Islamic republic was established shortly after that, he was named the Supreme Leader. Though in poor health, he ruled the country for the next decade, until his death on June 3, 1989.

Several observers have noted the manner in which Khomeini’s exile and return followed the pattern of the Shi’as’ twelfth Imam of the tenth century. According to Shi’a belief, this Imam, a descendant of Muhammad, disappeared in 941 CE. While many thought he had been assassinated, the faithful believed that he was alive, and has remained alive, and will at some point reappear to rule the world.