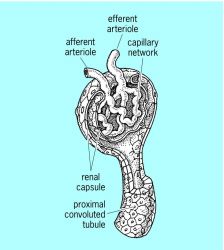 Feedback
Flashcards & Bookmarks ?
Please log in or register to use Flashcards and Bookmarks. You can also log in with
Flashcards ?
My bookmarks ?
+ Add current page to bookmarks
Mentioned in ?
References in periodicals archive ?
Characterized by reduced kidney function or kidney damage, chronic kidney disease affects approximately 10 percent of adults in the US.
Novel genes influencing kidney disease risk discovered
"Kidney Diseases Dictionary Index." National Kidney and Urologic Diseases Information Clearinghouse.
Urinary Tract Conditions; Questions to Ask
The single step of universally immunizing every patient with chronic kidney disease against influenza has the potential to save millions of dollars annually in hospitalization costs, said John M.
Risks from kidney disease surpass diabetes risks in the elderly. (An Ounce of Prevention)
APAC is poised to be the fastest growing chronic kidney diseases market.
Chronic Kidney Disease (CKD) Drug Market Size, Share, 2019, Global Industry Trends, Key Countries Analysis By Competitive Scenario With Impact Of Drivers And Challenges To 2023
Most part of the kidney is already damaged by the time symptoms of disease appear while Pakistan is the eight largest countries with high prevalence of kidney diseases causing 20 thousand deaths annually.
Kidney disease
'There are cost-effective models of screening; such as diabetic nephropathy test, screening other high-risk patients and treatment of kidney diseases that can be integrated within the health care.
Expert Advocates Prevention, Screening, Timely Treatment Of Kidney Diseases
Mark Solero, chief of the PRO's Regional Health Service XI, said that kidney diseases have become prevalent in the police force with 130 cases recorded last year.
Editorial / Another silent killer
He said male are mostly affected of Kidney diseases as compared to women in our country.
'Kidney diseases curable if timely diagnosed': Uologists advised
He said that CKD was a silent killer as most of the kidney was already damaged by the time the symptoms of kidney diseases appeared.
ICCI for equipping public hospital with screening facilities
The experts said the leading cause of chronic kidney diseases were primarily diabetes, kidney glomerular diseases and high blood pressure in addition to excessive use of painkillers, uncertified herbal medicines, genetic disorders, defects at birth, stone disease, infections, environmental pollution, unhygienic conditions and old age.
Pakistan ranks eighth globally in kidney diseases, say experts
They said that the leading cause of chronic kidney diseases are primarily diabetes, kidney glomerular diseases and high blood pressure.
Pakistan ranked 8th in the world in kidney diseases: Experts
Nephrologist and head of the Kidney Transplant Unit at Pakistan Institute of Medical Sciences (PIMS), Dr Khawar Sultan said consuming junk and low quality food, self-medication or excessive use of medicine, low water intake, obesity, diabetes, hypertension and renal stones are few common causes of kidney diseases.
17m Pakistanis suffering from kidney diseases