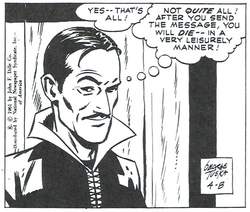 (pop culture)
From the moment futuristic space hero Buck Rogers arrives in the twenty-fifth century, he begins battling colossal villains and alien life forms. Primary is Killer Kane, a “Yellow Peril”–type world dominator who gives the hero a run for his money in the trendsetting science-fiction newspaper strip, Buck Rogers in the Twenty-Fifth Century (1929–1968), a popular radio show (1932–1947), and a 1939 movie serial. Created by Philip Francis Nowlan, Rogers' first appearance was in the story “Armageddon 2419 A.D.,” which ran a 1928 issue of the pulp magazine Amazing Stories. In a futuristic world threatened by Mongol hordes, Rogers—aided primarily by his sidekick Wilma Deering, his ally Dr. Huer, and his trusty ray gun—battles the super-malevolent Killer Kane. Together, Rogers and Killer Kane represent “the age-old conflict between good and evil; between avaricious self-seekers and peacemakers,” notes Robert C. Dille's The Collected Works of Buck Rogers (1969). “Kane is no two-dimensional cardboard cutout. He's a believable mixture of motives and traits—most of them rotten … He's endlessly cunning, greedy, revengeful, and resourceful.” The basic premise of Rogers and friends battling all forms of intelligent terror in space worked for the strip, radio show, and assorted Famous Funnies comic books; however, a revised storyline drove the twelve-chapter RKO movie serial. Emerging from a state of suspended animation after 500 years, pilot Rogers (portrayed by Buster Crabbe) and passenger Buddy Wade awaken in the year 2440 to the crude reality of Killer Kane (portrayed by Anthony Warde), an evil gangster who tyrannically rules the world. He is thwarted only by a small resistance effort headquartered from a secret lab run by Dr. Huer. Relying on an arsenal of weapons created in Dr. Huer's lab, Rogers and company solicit the help of Prince Tallen of the planet Saturn. After several encounters with the Zugg men, Buck and Buddy engage in an air battle to wrest control of the universe from the intergalactic ruler. The serial was edited into two feature films, Planet Outlaws in 1953 and Destination Saturn in 1965. Killer Kane appeared from 1979 to 1981 in the disco-era television series Buck Rogers in the Twenty-Fifth Century, in which Rogers (actor Gil Gerard), an astronaut whose shuttle crash-lands on a nuclear war–ravaged Earth, battled Kane and his minions. Kane was portrayed by two actors, Henry Silva in 1979 and Michael Ansara in 1979–1980. Pamela Hensley appeared as Princess Ardala of Draconia, a would-be world dominator and sometime acquaintance of Kane who also had her sights set on Rogers.
The Supervillain Book: The Evil Side of Comics and Hollywood © 2006 Visible Ink Press®. All rights reserved.

Feedback
Flashcards & Bookmarks ?
Please log in or register to use Flashcards and Bookmarks. You can also log in with
Flashcards ?
My bookmarks ?
+ Add current page to bookmarks
Mentioned in ?
References in periodicals archive ?
And Annikin (last name: Starkiller) is an overweight, awkward teenager (in the opening, an apprentice to Jedi Kane Starkiller--after Killer Kane in Buck Rogers ) who at one point responds to the death of his brother by wiring the corpse to a detonator and then blowing it up.
Feature Article: The Story of Star Wars - Part 2: "Annikin Starkiller"
Killer Kane; a Marine long-range recon team leader in Vietnam, 1967-1968.
Killer Kane; a Marine long-range recon team leader in Vietnam, 1967-1968
As the first rays of the rising sun reached Truk, Killer Kane and his flight of Hellcats swept down on the islands of the atoll.
The raid on Truk Lagoon: many younger Americans have gained the impression that America dropped atomic bombs on Japan to avenge Pearl Harbor, but our revenge happened at Truk Lagoon
Through Tillman's colorful narrative, the exploits of Alexander Vraciu, Killer Kane, Dave McCampbell, and other heroes of the battle charge back to life.
Clash of the Carriers: The True Story of the Marianas Turkey Shoot of World War II