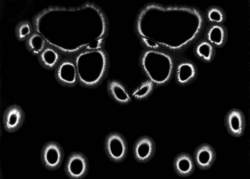 In the 1970s people in the West became aware of a new photographic technique that utilized a high-frequency, high-voltage, low-amperage electrical field to produce pictures of what was described as a biofield. Objects thus photographed, especially living objects, showed a glowing discharge surrounding the object, which was especially beautiful when color film was used.

The process of Kirlian photography is named after Seymon Davidovich Kirlian, an amateur inventor and electrician of Krasnodar, Russia, and his wife and research associate, Valentina Kirlian. Together they began initial research in electrical photography in the early 1940s.

The nature of the effects produced by Kirlian photography has offered hope of producing information useful to medicine and biology, but in the 1960s it caught the attention of people interested in psychic phenomena. The discharge around objects was identified with the aura around living objects that many psychics claimed to see. Possibly the photographs would offer a general verification of their psychic vision.

In the 1970s in the West, a number of parapsychologists obtained the equipment necessary to reproduce Kirlian photographs and began to look for effects that correlated with findings concerning psychokinesis, especially psychic healing. Taking pictures of people’s hands, especially fingertips, became a popular activity wherever psychically inclined people gathered. In some cases very interesting pictures could be taken of people in a normal state of consciousness as opposed to when they were preparing to heal someone.

After several years of initial experimentation, increasingly more rigid controls were applied to the pictures, especially controls for the pressure between the film and the object being photographed. When such controls were enforced, all of the interesting effects previously seen disappeared. By the beginning of the 1980s, Kirlian photography had largely been discarded as a technique capable of making visible hidden psychic energies. Meanwhile, little relevance was found for Kirlian pictures in other fields. 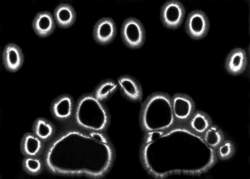 Kirlian photography was developed by Semyon and Valentina Kirlian, a Russian husband and wife who used high frequency electrical currents to make visible the colored auras around all living things.

About fifty years ago, Semyon Kirlian, an electrical engineer, saw a demonstration of a high frequency electro-therapy machine at a southern Russian research institute. He noticed tiny flashes of light between the machine’s electrodes and the patient’s skin and wondered what would happen if he placed a photographic plate there. He experimented using himself as a guinea pig. From a crude and painful first experiment, he and his wife progressed to a technique that gave astonishing results. The object to be photographed is placed on sensitive photographic paper which then goes underneath a specially constructed, high frequency, spark generator. This produces 75,000 to 200,000 oscillations per second. When the generator is switched on, the radiation from the object is transferred to the paper.

The Kirlians referred to the aura as a “bioplas-mic body.” Early photographs of this type have shown that in plants, the onset of a disease can be seen before the disease is actually visible by normal means. In one experiment, a leaf was photographed and produced a good Kirlian image. Then part of the leaf was cut away and it was photographed a second time. In this second picture, there was again an image of the complete leaf. This gave rise to the conjecture that the “bioplasma” of a living thing remains even after the physical body has gone. This may be the scientific proof of the existence of spirit after death, as believed in by Spiritualists and others for many years.

Changes in the human aura can be indicators of problems to come, as has been discovered at the Kazakh State University in Alma-Ata, Russia. Kirlian photography has shown that there are emissions from the hands and fingers of a healer, and that they are of exceptional length and intensity at the time of doing a healing. Kirlian photography has also revealed that there are correspondences, in the color and intensity of light, between the points of the body where an acupuncturist sticks the needles.