[′nīf ‚swich]
(electricity)
An electric switch consisting of a metal blade hinged at one end to a stationary jaw, so that the blade can be pushed over to make contact between spring clips.
McGraw-Hill Dictionary of Scientific & Technical Terms, 6E, Copyright © 2003 by The McGraw-Hill Companies, Inc.
The following article is from The Great Soviet Encyclopedia (1979). It might be outdated or ideologically biased.

a manually operated electric switching device that makes, breaks, or changes the course of electric circuits. The switch can operate either under load, at voltages of up to 220 volts for direct current and 380 volts for alternating current, or in the absence of current. The switch is characterized by the shape of its contact, which suggests a knife blade. Depending on the number of contacts, knife switches are subdivided into single-pole, double-pole, triple-pole, and multipole types. To increase the maximum current that can be interrupted, high-power knife switches are equipped with arc-quenching chambers. 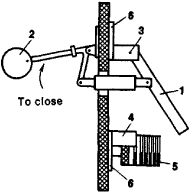 When a single-pole knife switch is closed (Figure 1), the switch blade is turned about its axis by the handle and “cuts” into the stationary spring contact jaw. When the load current is interrupted, an electric arc is established between the switch blade and the contact jaw, and the arc is then extinguished in the arc-quenching chamber. The arc must be extinguished as soon as possible in order to avoid burning the contacts. At currents below 75 amperes, the arc can be extinguished through a mechanical separation; the time necessary to interrupt the arc depends on the speed at which the switch blade is moved. In knife switches designed for higher currents, the determining factors for extinguishing the arc are the arc’s electrodynamic rupturing forces. The magnitude of these forces is directly proportional to the current being interrupted and approximately inversely proportional to the length of the blade. In order to make the speed at which the contacts are separated independent of the speed at which the handle is turned, a quick-break opening is effected with auxiliary contact blades. Such an opening facilitates the extinguishing of the arc to a significant degree. Knife switches are designed so that the contacts are not heated above permissible temperatures under normal operating conditions and so that the contacts do not weld together during short circuits and do not open spontaneously.

knife switch
A type of electric switch consisting of one or more movable copper blades which are hinged and which make contact with stationary forked contact jaws by being forced between them.
McGraw-Hill Dictionary of Architecture and Construction. Copyright © 2003 by McGraw-Hill Companies, Inc.

Feedback
Flashcards & Bookmarks ?
Please log in or register to use Flashcards and Bookmarks. You can also log in with
Flashcards ?
My bookmarks ?
+ Add current page to bookmarks
Mentioned in ?
References in periodicals archive ?
The Subtle Knife switches locations, first to our Earth, and then to the dangerous, specter-filled world of Cittagazze.
His Dark Materials Trilogy
As a youngster I enjoyed wiring up circuits with knife switches, lamps, buzzers and large dry cells.
Kits for kids