(1) Preparation of 2-hydroxyquinolines by the intramolecular condensation of β-ketocarboxylic acid arylamides in the presence of sulfuric acid: 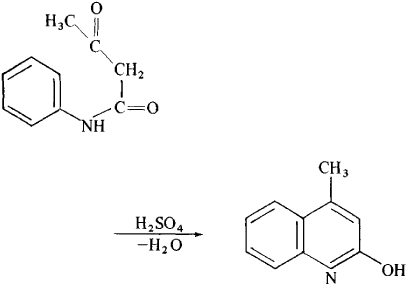 (2) Synthesis of 5-pyrazolones by the condensation of β-keto acid esters with hydrazines:

(3) Preparation of pyrroles by the condensation of α-amino ketones with ketones containing an active methylene group:

(4) Preparation of pyrroles from γ-diketones and ammonia or primary amines:

The Knorr reactions are used in organic synthesis, both in the laboratory and in industry, particularly for the preparation of medicinal substances (for example, antipyrine, amidopyrine, analgin) and dyes (quinoline-cyanine dyes, pyrazolone dyes). The reactions were developed by the German chemist L. Knorr beginning in 1884.