in U.S. history. The increasing rate of immigration in the 1840s encouraged nativism. In Eastern cities where Roman Catholic immigrants especially had concentrated and were welcomed by the Democrats, local nativistic societies were formed to combat "foreign" influences and to uphold the "American" view. The American Republican party, formed (1843) in New York, spread into neighboring states as the Native American party, which became a national party at its Philadelphia convention in 1845. The movement was temporarily eclipsed by the Mexican War and the debates over slavery. When the slavery issue was temporarily quieted by the Compromise of 1850 nativism again came to the fore. Many secret orders grew up, of which the Order of United Americans and the Order of the Star-Spangled Banner came to be the most important. These organizations baffled political managers of the older parties, since efforts to learn something of the leaders or designs of the movement were futile; all their inquiries of supposed members were met with a statement to the effect that they knew nothing. Hence members were called Know-Nothings, although there was never a political organization bearing the name. Efforts were concentrated on electing only native-born Americans to office and on agitating for a 25-year residence qualification for citizenship. Growing rapidly, the Know-Nothings allied themselves with the group of Whigs who followed Millard Fillmore and almost captured New York state in the 1854 election, while they did sweep the polls in Massachusetts and Delaware and had local successes in other states. The disintegration of the Whig party aided them in their strides toward national influence. In 1854 they looked toward extension into the South, and in the following year they openly assumed the name American party and cast aside much of their characteristic secrecy. In June, 1855, a crisis developed; at a meeting of the national council in Philadelphia, Southerners seized control and adopted a resolution calling for the maintenance of slavery. The slavery issue, after the passage of the Kansas-Nebraska Act, again came to the front, and this time the slavery issue split apart the Know-Nothing movement as it had the Whigs. The antislavery men went into the newly organized Republican party. Millard Fillmore, the American party candidate for President in 1856, polled a small vote and won only the state of Maryland. The national strength of the Know-Nothing movement thus was broken. 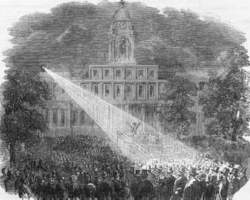 A demonstration of the Know-Nothing Party in New York City. Know-Nothing members wanted to exclude immigrants from the democratic process and were anti-Catholic.

In the 1840s and 1850s, secret societies united to form a movement that demanded stricter immigration policies and the restriction of political office to native-born Americans.

Contrary to popular understanding, there never was an official political organization bearing the name Know-Nothing Party. In 1843 the American Republican Party was formed in New York as a reaction by native-born Americans toward the large numbers of Irish Roman Catholic immigrants who were crowding into the cities on the East Coast. As the organization grew in strength, it changed its name to Native American Party and declared itself a national party at its convention in Philadelphia in 1845. But when hostilities broke out along the Texas border in 1846 and war was declared against Mexico, the Native American Party lost its momentum.

Although no longer a recognized national political party, some members of the Native American group formed secret societies, such as the Order of United Americans and the Order of the Star-Spangled Banner. These societies worked behind the political scenes to ensure that only native-born candidates won state or national offices. When members of older, established political parties attempted to learn more about these secret societies and approached an individual they suspected belonged to such a group, the person being interrogated, true to his pledge, would answer that he knew nothing. Newspaper editor Horace Greeley applied the “Know-Nothing” label to men he knew were undoubtedly members of the United Americans or the Star-Spangled Banner yet professed to “know nothing.”

By 1852 the Know-Nothings were gaining strength and forming lodges in nearly every major American city. Many citizens formerly allied with an established political party agreed with the Know-Nothings that there should be greater restrictions on immigration, that the foreign-born should be excluded from voting or from holding public office, and that there should be a minimum of twenty-one years’ residency before one could become a citizen of the United States. By 1853 the Know-Nothings no longer saw any need to belong to secret societies and became a national political party with the official name American Party. By 1855 forty-three representatives of Congress were avowed Know-Nothings, members of the American Party.

The following year, at the peak of its power, the American Party was squelched because of a highly publicized split within its own ranks over the issue of slavery. Former president Millard Fillmore, a Whig who refused to join the Republican Party, accepted the nomination for president as the candidate for the American Party in the election of 1856. Fillmore carried only the state of Maryland, and the party’s congressional strength plummeted to twelve representatives. Antislavery Know-Nothings joined the Republican Party, and its southern members carried the proslavery banner to the Democratic Party. By 1859 whatever strength remained in the American Party was felt only in some of the border states.

Feedback
Flashcards & Bookmarks ?
Please log in or register to use Flashcards and Bookmarks. You can also log in with
Flashcards ?
My bookmarks ?
+ Add current page to bookmarks
Mentioned in ?
References in periodicals archive ?
As unskilled male laborers from Ireland and German poured into the United States during the 1840s, they crowded urban labor markets, arousing resentment that found political expression in the so-called "know-nothing movement," which elected several anti-immigrant governors and Congressional representatives in the 1850s.
Mass Immigration and the National Interest
The temperance issue and a small Know-Nothing movement arrived at approximately the same time as the anti-Nebraska crusade, almost no Liberty or Free Soil activists in Iowa became Know-Nothings, and since slavery and black civil rights issues split the state's small Know-Nothing movement, Republicanism could not have been a product of nativism in the state.
Bright Radical Star: Black Freedom and White Supremacy on the Hawkeye Frontier
The nativists of the Know-Nothing movement appear simply as a malign force hostile to the Germans.
The Spirit of 1848: German Immigrants, Labor Conflict, and the Coming of the Civil War