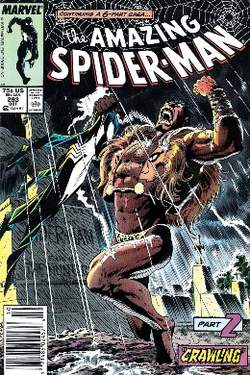 (pop culture)
Sergei Kravinoff—publicly known as Kraven the Hunter, the world's most renowned animal trapper— swaggers into New York City in The Amazing Spider-Man vol. 1 #15 (1964) in pursuit of “the most dangerous game of all”: Spider-Man! Ruggedly handsome, mustached, and bursting with machismo, Kravinoff, an overconfident Russian aristocrat exiled from his homeland into Britain, spends much of his youth in Africa, where he gains superhuman strength and stamina from a witch doctor's herbal brews. Able to methodically outmaneuver his prey and overcome any beast with his bare hands, the hunter dubbed “Kraven” is lured to the United States by Spider-Man's first foe, the Chameleon, Kravinoff's “old friend” in the original text but established in later continuity as his halfbrother. Kraven comes close to bagging the wallcrawler, but the cunning Spider-Man snares the hunter in a giant web. Looking every inch the forerunner to circus showmen Siegfried and Roy, Kraven the Hunter was festooned in leopard-print tights, a lion-motif vest with a mane, and a zebra-striped belt dotted with tusks containing tranquilizers, toxins, and strengthaugmenting potions. His vest's lion “eyes” emitted “electro-bursts,” and he wielded magnetic handcuffs to slow down his prey. Kraven's co-creators, writer Stan Lee and illustrator Steve Ditko, drew inspiration from the character General Zaroff, first seen in Richard Connell's 1924 novel The Most Dangerous Game and later translated to film in 1932, 1946, and 1956. On the heels of his first appearance, Kraven took on Iron Man in Tales of Suspense #58, then partnered with five other vanquished Spider-Man enemies— Dr. Octopus, the Vulture, Sandman, Mysterio, and Electro—as the Sinister Six in The Amazing Spider- Man Annual #1, both published in 1964. His ego bruised from his ignominious defeats, Kraven sullied Spider-Man's reputation by masquerading as the hero in 1966, his actions goading the real Spidey into a trap, but through unbridled resourcefulness the wall-crawler hammered the hunter once again. Conceited to a fault, his losses sat poorly with Kraven, and over the next twenty years he frequently returned to attempt to capture Spider-Man, the occasional clash with Ka-Zar, Daredevil, and Man-Wolf aside. Eventually Kraven's sanity was eroded by his defeats and his loss of stature. In an applauded six-part story by writer J. M. DeMatteis and artist Mike Zeck, serialized throughout three different Spider-Man comics series in 1987, Kravinoff executed “Kraven's Last Hunt,” finally trapping the wall-crawler—“There's … something in his eyes! This isn't the Kraven I know!” thought a bewildered Spidey—and resorting to firearms, apparently killing the hero. Kraven then usurped the web-slinger's costumed identity, as he did in 1966, on a mad mission of proving his superiority to his fallen foe. Spider-Man was not actually dead, but tranquilized and buried alive, and he escaped from his grave. Satisfied with having bested Spider- Man, Kraven put a shotgun to his mouth and, in a scene chillingly rendered in silhouette by Zeck and inker Bob McLeod, committed suicide. Kraven's legacy has continued to populate the pages of Marvel Comics in the years after Kravinoff's demise. In the mid-1990s his son Vladimir Kravinoff briefly followed his father's footsteps by becoming the “Grim Hunter,” but died at the hands of the assassin Kaine, Spider-Man's evil clone. Alyosha Kravinoff, Kraven's illegitimate son first seen in 1997, was obsessed with learning about the father who abandoned him and adopted his Kraven the Hunter identity. After a few clashes with Spider-Man and the Black Panther, Alyosha realized that his gifts were better used for entertainment, adapting to a different type of jungle—Hollywood— as a film producer named “Al Kraven.” His adventures in Tinseltown were chronicled in the six-issue miniseries Get Kraven (2002)—but between the fickle nature of show business and the super-villainy in his blood, Kraven II may one day resume the hunt. Gregg Brewer played the original Kraven the Hunter in the animated series Spider-Man (1994–1998), and Michael Dorn voiced the villain in MTV's short-lived Spider-Man toon of 2003. A 2005 rumor that he would appear in the live-action film Spider-Man 3 was later dispelled. Never a top-tier Spider-foe, Kraven has sporadically appeared in merchandising in the 1990s and 2000s, including a Toy Biz action figure and collectible mini-busts.
The Supervillain Book: The Evil Side of Comics and Hollywood © 2006 Visible Ink Press®. All rights reserved.

Feedback
Flashcards & Bookmarks ?
Please log in or register to use Flashcards and Bookmarks. You can also log in with
Flashcards ?
My bookmarks ?
+ Add current page to bookmarks
Mentioned in ?
References in periodicals archive ?
But when qguirrel Girl and Nancy gather Koi Boi, Chipmunk Hunk, Brain Drain and Kraven the Hunter inside and lock the door, it turns out that this escape room is actually lethal after all!
The Unbeatable qguirrel Girl: qguirrels Fall Like Dominoes (The Unbeatable Squirrel Girl, Volume 9)
The current incarnation of the band is version 5.0, featuring Dr Rabid Hell, Brother Dimitri Pain, Kraven Morrdeth, Princess Luxury and Ringmaster Monty Blitzfist.
Mix of Pythonesque absurdity and clear love of Black Metal
Sony will also be releasing 'Morbius the Living Vampire' starring Jared Leto and drected by Daniel Espinosa, along with the movie 'Kraven the Hunter'.
'Silver Sable' and 'Black Cat' part ways
Slade flees to Africa to build a new life and escape his past, but he is captured by an enigmatic American colonel, Gary Kraven, and blackmailed into tracking down a blood cult that is rampaging across the sub- Sahara.
Into a Dark Frontier
They have ranged from A9 graders to Scurry Gold Cup finalist Farloe Ferdinand (Rio), Puppy Derby runner-up Farloe Mysterio (Dave), and Cesarewitch winner Farloe Kraven (Charlie), coming from the Loughrey family - wonderful people - and Emmet Hazlett.
THEE WEEEEKEEND WAGER
He helped introduce some changes himself, as penciler of significant projects in the 1980s, including the gritty 'Punisher: Circle of Blood' miniseries; the acclaimed 'Spider-Man: Kraven's Last Hunt' arc; and the superhero team-up book, 'Secret Wars.'
Ex-Marvel artist: Despite characters' movie fame, print still struggles
Kraven chicken wings with a sticky rum and brown sugar coating (PS5.95 regular, PS10.95 large).
It's a rum do down at the Albert Dock; THE SAILORS' FAVOURITE TIPPLE IS BEING CELEBRATED AGAIN AT THE RUM FESTIVAL, WRITES JADE WRIGHT
Bad guys include Venom, the Green Goblin, Electro and Kraven the Hunter.
STAYING IN; BOOKS
Fortunately, if Spider-Man can take a break from fighting the Chameleon and Kraven the Hunter, he can check out an upcoming Supreme Court case and learn if there are any changes to patent royalty laws.
Spider-Man gets tangled in patent royalty web
Octopus, Electro, Kraven the Hunter, Sandman, Mysterio and Vulture.
'Amazing Spider Man 3' Release Date Pushed To 2018: Plot Details Emerge, 'Sinister Six' To Get Prior Release
Med M4BP ar ABB snabba med att erbjuda marknaden en motorserie som uppfyller de kommande kraven i Ekodesigndirektivet.
Talking green in the public sphere: press releases, corporate voices and the environment