Krebs cycle, series of chemical reactions carried out in the living cell; in most higher animals, including humans, it is essential for the oxidative metabolism of glucose and other simple sugars. The breakdown of glucose to carbon dioxide and water is a complex set of chemical interconversions called carbohydrate catabolism, and the Krebs cycle is the second of three major stages in the process, occurring between glycolysis and oxidative phosphorylation. This cycle, also known as the citric acid cycle, was named in recognition of the German chemist Hans Krebs, whose research into the cellular utilization of glucose contributed greatly to the modern understanding of this aspect of metabolism. The name citric acid cycle is derived from the first product generated by the sequence of conversions, i.e., citric acid. The reactions are seen to comprise a cycle inasmuch as citric acid is both the first product and the final reactant, being regenerated at the conclusion of one complete set of chemical rearrangements. Citric acid is a so-called tricarboxylic acid, containing three carboxyl groups (COOH). Hence the Krebs cycle is sometimes referred to as the tricarboxylic acid (TCA) cycle. The Krebs cycle begins with the condensation of one molecule of a compound called oxaloacetic acid and one molecule of acetyl CoA (a derivative of coenzyme A; see coenzyme). The acetyl portion of acetyl CoA is derived from pyruvic acid, which is produced by the degradation of glucose in glycolysis. After condensation, the oxaloacetic acid and acetyl CoA react to produce citric acid, which serves as a substrate for seven distinct enzyme-catalyzed reactions that occur in sequence and proceed with the formation of seven intermediate compounds, including succinic acid, fumaric acid, and malic acid. Malic acid is converted to oxaloacetic acid, which, in turn, reacts with yet another molecule of acetyl CoA, thus producing citric acid, and the cycle begins again. Each turn of the citric acid cycle produces, simultaneously, two molecules of carbon dioxide and eight atoms of hydrogen as byproducts. The carbon dioxide generated is an ultimate end product of glucose breakdown and is removed from the cell by the blood. The hydrogen atoms are donated as hydride ions to the system of electron transport molecules, which allow for oxidative phosphorylation. In most higher plants, in certain microorganisms, such as the bacterium Escherichia coli, and in the algae, the citric acid cycle is modified to a form called the glyoxylate cycle, so named because of the prominent intermediate, glyoxylic acid.
The Columbia Electronic Encyclopedia™ Copyright © 2022, Columbia University Press. Licensed from Columbia University Press. All rights reserved.

In aerobic cells of animals and certain other species, the major pathway for the complete oxidation of acetyl coenzyme A (the thioester of acetic acid with coenzyme A); also known as the Krebs cycle or tricarboxylic acid cycle. Reduced electron carriers generated in the cycle are reoxidized by oxygen via the electron transport system; water is formed, and the energy liberated is conserved by the phosphorylation of adenosine diphosphate (ADP) to adenosine triphosphate (ATP). Reactions of the cycle also function in metabolic processes other than energy generation. The role of the cycle in mammalian tissues will be emphasized in this article. See Adenosine diphosphate (ADP), Coenzyme, Enzyme

The first step in the cycle involves the condensation of the acetyl portion of acetyl coenzyme A (CoA) with the four-carbon compound oxaloacetate to form citrate, a tricarboxylate containing six carbons (see illustration). A shift of the hydroxyl group of citrate to an adjacent carbon results in the formation of d -threo-isocitrate, which in turn is oxidized to the five-carbon compound α-ketoglutarate and carbon dioxide (CO2). In a second oxidative decarboxylation reaction, α-ketoglutarate, in the presence of CoA, is converted to succinyl CoA and another molecule of CO2. In the subsequent formation of the four-carbon compound succinate and CoA, the energy in the thioester bond of succinyl CoA is conserved by the formation of guanosine triphosphate (GTP) from guanosine diphosphate (GDP) and inorganic phosphate. Fumarate is formed from succinate by the removal of two atoms of hydrogen, and the unsaturated compound is then hydrated to l -malate. The dehydrogenation of malate forms oxaloacetate, the starting four-carbon compound of the metabolic cycle. Thus, beginning with the two-carbon acetyl group, one completion of the cycle results in the formation of two molecules of carbon dioxide. 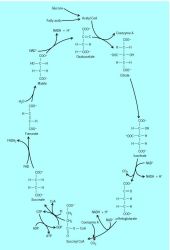 The oxidation of acetyl CoA to CO2 in the cycle occurs without direct reaction with molecular oxygen. The oxidations occur at dehydrogenation reactions in which hydrogen atoms and electrons are transferred from intermediates of the cycle to the electron carriers nicotinamide adenine dinucleotide (NAD+) and flavin adenine dinucleotide (FAD). The electrons from NADH and FADH2 are transferred to molecular oxygen via a series of electron transport carriers, with regeneration of NAD+ and FAD. The energy liberated in the electron transport chain is partially conserved by the formation of ATP from ADP and inorganic phosphate, by a process called oxidative phosphorylation. The energy generated as oxygen accepts electrons from the reduced coenzymes generated in one turn of the cycle results in the maximal formation of 11 molecules of ATP. Because GTP obtained by phosphorylation of GDP at the succinyl CoA to succinate step of the cycle is readily converted to ATP by nucleotide diphosphokinase, the yield is 12 molecules of ATP per molecule of acetyl CoA metabolized. See Nicotinamide adenine dinucleotide (NAD)

The electron transport and oxidative phosphorylation systems and the enzymes required for the citric acid cycle are located in the mitochondria of cells, which are the major source of ATP for energy-consuming reactions in most tissues. The citric acid cycle does not occur in all cells. For example, mature human red blood cells do not contain mitochondria and the cycle is absent. In these cells, ATP is formed by the anaerobic conversion of glucose to lactate (anaerobic glycolysis). See Mitochondria

Acetyl CoA is formed from carbohydrates, fats, and the carbon skeleton of amino acids. The origin of a precursor and the extent of its utilization depend on the metabolic capability of a specific tissue and on the physiological state of the organism. For example, most mammalian tissues have the capacity to convert glucose to pyruvate in a reaction called glycolysis. Pyruvate is then taken up from cellular cytosol by mitochondria and oxidatively decarboxylated to acetyl CoA and carbon dioxide by pyruvate dehydrogenase. Acetyl CoA is also the end product of fatty acid oxidation in mitochondria. However, the fatty acid oxidation pathway occurs in fewer tissues than does glycolysis or the citric acid cycle. The amino acids follow varied pathways for forming compounds that can enter the citric acid cycle. See Amino acids

In addition to the cycle's role in yielding catabolic energy, portions of it can supply intermediates for synthetic processes, such as the synthesis of the fatty acid moiety of triglycerides from glucose (lipogenesis), and formation of glucose from the carbon skeletons of certain amino acids, lactate, or glycerol (gluconeogenesis). See Carbohydrate metabolism, Cell (biology), Glucose, Glycogen, Lipid metabolism, Metabolism