, edifice of worship
temple, edifice or sometimes merely an enclosed area dedicated to the worship of a deity and the enshrinement of holy objects connected with such worship. The temple has been employed in most of the world's religions. Although remains of Egyptian temples of c.2000 B.C. show well-defined architectural forms, it seems likely that temples were hewed in living rock at a still earlier age: the cave temples of Egypt, India, China, and the Mediterranean basin may be viewed as later developments of such primitive shrines.

In Egypt in the New Kingdom impressive rock temples were hewed from cliffsides, the finest being the great temple of Abu-Simbel constructed by Ramses II. In the developed structural temples of Egypt a doorway, flanked by monumental towers or pylons, led to an unroofed open court, generally surrounded on three sides by a colonnaded passage. Beyond the court lay the majestic hypostyle hall and a variety of chambers preceding and surrounding the holy of holies. From the temple entrance to this innermost sanctuary the various units diminished progressively in size and height, while the direct outside light was also reduced. The typical temple later accumulated additional pylons, courts, and rooms, the entire group being enclosed by a massive wall. Only monarchs and priests had access to the chambers beyond the hypostyle hall. The New Kingdom was the most active period of temple construction, although the grandest temple, that of Amon at Al Karnak, was begun much earlier.

In the ancient Babylonian and Assyrian periods of W Asia the temple, or ziggurat, was a square pyramidal structure about 300 ft (90 m) high built up in successive, inclined terraces, sometimes as many as seven; with accessory buildings it was enclosed by walls. At its summit was a chamber that served both as a shrine and for astronomical observations. Glazed colored bricks faced the walls.

The temple of Solomon at Jerusalem, the only known monumental structure of the ancient Hebrews, consisted, according to biblical descriptions, of entrance pylons, courts, and a naos, a large rectangular chamber, giving entrance to the holy of holies, which housed the Ark of the Covenant. Its several destructions and reconstructions (one by Herod in 20 B.C.) have rendered unrecognizable any remains of the original edifice. The workmanship, characteristically Phoenician, was of stone, timber, and metal. The temple of Herod, to which Jesus went, was destroyed A.D. 70; its ruins have symbolized to the Jews their dispersion.

The Dorian immigration (before 1000 B.C.) was a prelude to the building of Greek temples, at first made of timber and sun-dried brick. The superb stone and marble buildings on a defined floor plan were achieved in the middle of the 6th cent. B.C., although the most perfect examples, like the Parthenon (5th cent. B.C.), came later. The Greek temple customarily stood in a temenos, or sacred enclosure, along with accessory shrines, colonnades, and buildings housing the temple treasures. It was built not as a place for assembled worship but as the dwelling for the deity, whose colossal sculptured representation was placed in the naos, and illuminated by the daylight entering through the tall entrance portal. In larger temples, to support the roof lintels, two interior rows of columns divided the naos into nave and side aisles.

The Roman temple, while based upon the Greek type, retained elements from Etruscan architecture, as in its deep front portico and its elevation upon a high base, or podium, whose wings extended forward to flank the broad entrance steps. The Maison Carrée at Nîmes, France (1st cent. B.C.), the best-preserved Roman temple, is the common pseudoperipteral type, with engaged columns or pilasters attached to its walls. Unlike the long narrow Greek naos, the Roman cella was nearly square in plan. Of the polygonal and circular temples the circular pantheon at Rome (2d cent. A.D.) with its magnificent dome is the most remarkable. Many temples, particularly those of the Eastern colonies, as at Baalbek in Syria, had magnificent settings of entrance courts enclosed by colonnades.

Temple, the, district of the City of London, England. The name refers to two of the four Inns of Court, the Middle Temple and the Inner Temple. The Temple was originally the English seat of the famous order of Knights Templars. The Inner Temple hall and library and the Temple Church—a Norman round church dedicated in 1185—have been restored in their original styles following severe damage in World War II. The Temple Bar is the gate designed by Christopher Wren c.1672 on the site of the bar or chain that marked one of the entrances to the City of London. The Bar was removed in 1878 and is now in Theobalds Park near Waltham; there is a monument on the old London site, at the junction of Fleet St. and the Strand. Here the lord mayor officially receives personages from outside the City. In the 17th and 18th cent. heads of traitors were displayed there.
The Columbia Electronic Encyclopedia™ Copyright © 2022, Columbia University Press. Licensed from Columbia University Press. All rights reserved. 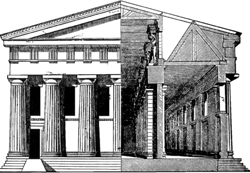 temple, 1: at Agrigentum
1. An impressive edifice for a particular public use.
2. A Classical edifice dedicated to the service of an ancient deity, usually connected with a system of worship.
3. A structure specifically used for worship, for example, a synagogue or a Buddhist temple.
McGraw-Hill Dictionary of Architecture and Construction. Copyright © 2003 by McGraw-Hill Companies, Inc.

2
1. either of two buildings in London and Paris that belonged to the Templars. The one in London now houses two of the chief law societies
2. any of three buildings or groups of buildings erected by the Jews in ancient Jerusalem for the worship of Jehovah
Collins Discovery Encyclopedia, 1st edition © HarperCollins Publishers 2005

Feedback
Flashcards & Bookmarks ?
Please log in or register to use Flashcards and Bookmarks. You can also log in with
Flashcards ?
My bookmarks ?
+ Add current page to bookmarks
Mentioned in ?
References in periodicals archive ?
THANCHAN, Catholic Marriage Nullity Process: The Introduction of the Case a Study of Latin and Oriental Codes with Reference to Rotal Jurisprudence, Institute of Oriental Canon Law, Dharmaram Vidya Kshetram, Bangalore 2007.
El derecho oriental desde la promulgacion del CIC y del CCEO
Catholic Theological Ethics in the World Church announced the launch of a new book series in Chan's honor, Asian Theological Ethics, as well as a scholarship in his name for doctoral studies in biblical ethics at Dharmaram Vidya Kshetram.
Catholic moral theologians scan Asian reality