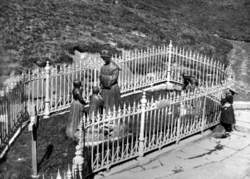 This statue in La Salette, France, commemorates the apparition of the Virgin Mary, who visited two young girls in 1846. The incident inspired the founding of the Missionaries of La Salette. Roger Violett/Getty Images.

On September 19, 1846, the mountain of La Salette in southeastern France became the site of an important and still controversial apparition of the Virgin Mary. The visionaries were two young shepherds, Melanie Calvat (d. 1904), then fourteen years old, and Maximin Giraud (d. 1875), then eleven. The Virgin appeared out of a globe of light, seated with her head in her hands. She was dressed in a white, pearl-studded dress with a tiara on her head. She wore a crucifix around her neck.

The Virgin delivered a simple message aimed at the growing practice of people working on Sunday and the rise of public blasphemy, which would be met with punishments in the form of famine and damage to crops. The children were told to spread this brief public message. However, the Virgin also gave each of them a secret message of greater length. They did not initially divulge these messages, but would tell them to Pope Pius IX in 1851. As has been common, the local bishop established a commission to investigate the apparitions, and in the face of opposition to his investigation, he later established a second commission to reexamine the event. In 1846 he approved the development of devotion to Our Lady of La Salette, and in spite of critics in both the secular and church community, the building of a church on the site commenced in 1852.

While devotion to the Virgin at La Salette developed, much interest focused on the secrets and their content. Maximin’s secret predicted France’s fall into apostasy and unbelief and the coming of the Antichrist. The more lengthy secret given to Melanie saw evil times approaching for Europe, especially France and Italy, and bemoaned the loss of piety and zeal by the priests of the church. There were a variety of specific prophecies. The continuing controversy concerning the apparition led Melanie to move to Italy, where she published what purported to be the text of the secret in 1879.

The 1879 publication lifted the controversy to a new stage. Immediately, critics attacked the text by claiming it varied significantly from the 1851 text sent to Pius IX, having been heavily influenced by Melanie’s reading of apocalyptic literature and other questionable materials. Many bishops in France took action against the 1879 publication and those who believed it. After Melanie’s death in Italy in 1904, the controversy eventually died out, the secret moved into oblivion, and the veneration of the Virgin of La Salette continued based upon the public message.

Feedback
Flashcards & Bookmarks ?
Please log in or register to use Flashcards and Bookmarks. You can also log in with
Flashcards ?
My bookmarks ?
+ Add current page to bookmarks
Mentioned in ?
References in periodicals archive ?
Our Lady of La Salette Church, 2600 Harvard Road, Berkley, Michigan
FORD CELEBRATES 25TH ANNIVERSARY OF WOODWARD DREAM CRUISE WITH MUSTANG ALLEY, SPECIAL ACTIVITIES
Jobert Cruz of DCNHS will serve as young city administrator; Sophia Bianca Fabia of Mother Goose Special Science High School as young city DILG (Department of the Interior and Local Government) officer; Jastine Mae Diaz of Lyceum Northwestern University-FQD as young city police chief; Julen Rica de Vera of Carael Integrated School as young fire marshal; Siena Gotos of Salapingao National High School as young Comelec (Commission on Elections) officer; and Shaira Allapitan of Escuela de Nuestra Senora de la Salette as young city warden.
Dagupan youth trained on LGU duties
La Salette So, in an effort to increase the number of Filipino tourists in France, since 2017 the French Embassy in Manila has implemented the delivery of visas in at least 48 hours.
Why you pray more, play more in France
The well venerated images include among others the Our Lady of the Visitation of Piat from Cagayan Valley; Our Lady of Guibang in Gamu, Isabela; Our Lady of the Holy Spirit in Guimaras, Iloilo; Nuestra Senora de Salvacion; Nuestra Senora de la Asuncion; Our Lady of Lourdes; Our Lady of Fatima; Our Lady of Buen Suceso; Our Lady of Pillar; Our Lady of the Abandoned; Our Lady of Victories; Our Lady of La Salette from Silang, Cavite; Our Lady of Namacpacan from Luna, La Union; Our Lady of Manaoag from Pangasinan;
39th Grand Marian procession in Intramuros Saturday
The Southeast of France has nine pilgrimage sites: the Notre-Dame de La Salette, Isere, Ars-Sur-Formans, Le Puy-en-Velay, Mende, Montpellier, Palace of the Popes in Avignon, Saint Maximin and Cotignac.
France pilgrimage sites aim for Filipino Catholics
Her husband, a 37-year-old criminology graduate of the University of La Salette in 2006, served in the SAF for eight years.
Widows of SAF commandos say Aquino should be jailed
Funeral mass to be held at Our Lady of Reconciliation De La Salette Church, Eldon Street on Thursday 28th July 2016 at 12 noon followed by interment at Ford Cemetery.
DEATHS
Father Weeks, who was ordained into the priesthood in 1962, volunteered to minister in the La Salette Missions in Argentina in 1964.
Remember a 'hero'
(1) This decree coincided with an intensification of Marian devotion across the globe with the Pope remarking: "piety toward the Virgin Mother of God is flourishing and daily growing more fervent." (2) It also coincided with the early years of the Cold War which witnessed a resurgence of interest in Marian apparitions and apocalyptic thinking arguably unseen since the high point of Marian devotion in the troubled atmosphere of nineteenth century France, where appearances of the Virgin Mary frequently occurred--at Paris (1830), La Salette (1846), Lourdes (1858), and Pontmain (1871)--in a society and Church still coming to terms with the legacy of the Revolution of 1789 and its aftermath.
"Mourning the death of our faith": the little pebble and the Marian work of atonement 1950-1984