Also found in: Dictionary, Medical.
Related to Lactams: lactim
The following article is from The Great Soviet Encyclopedia (1979). It might be outdated or ideologically biased.

internal cyclic amides of amino carboxylic acids that contain a —CO—NH— group in the ring (I). The tautomeric, enol form of lactam is known as lactim (II): 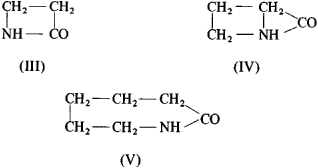 Lactams are primarily obtained by the cyclization of amino carboxylic acids or their derivatives [Y—(CH2)nNH2, where Y = COOH, COOR, CONH2, CN], as well as by the cyclization of amides of halogen carboxylic or hydroxycarboxylic acid [X—(CH2)nCONHR, where X = OH or a halogen]. An important method of obtaining lactam is the Beckmann rearrangement of cyclic ketoximes, which is used in the industrial preparation of ε-caprolactam.

Lactams readily undergo alkylation, acylation, and halogena-tion with retention of the ring. The lactam ring, however, is opened at the —CO—NH—bond during hydrolysis, ammonolysis, hydrogenolysis, and polymerization. For example, ε-caprolactam polymerization yields polycaproamide, from which nylon 6 fiber is made. Many lactams are biologically active substances (for example, a molecule of penicillin contains a β-propiolactam residue).

Feedback
Flashcards & Bookmarks ?
Please log in or register to use Flashcards and Bookmarks. You can also log in with
Flashcards ?
My bookmarks ?
+ Add current page to bookmarks
Mentioned in ?
References in periodicals archive ?
The antibiotics investigated in the study included penicillins (ampicillin, carbenicillin and piperacillin), 1st generation cephalosporins (cephalothin), 2nd generation cephalosporins (cefuroxime, cefoxitin and cefaclor), 3rd generation cephalosporins (ceftriaxone, cefotaxime and ceftazidime), 4th generation cephalosporins (cefepime) carbapenems (imipenem) and monocyclic lactams (aztreonam).
The sensitive and resistance rates to 2nd and 3rd generation cephalosporins and monocyclic lactams were close, but resistance rate to cefoxitin was very low.
Detection of Resistance Phenotype and Gene of Avian Escherichia coli to b-lactam Antibiotics
"The transaction also cements our leading position in beta lactam production and provides Recipharm not only with additional scale but also opportunities to realize commercial and operational synergies as we combine it with our existing Italian business."
Recipharm acquires Italian CDMO
In our study we focused on Beta ([beta]) lactam group of antibiotics, since they are widely used in therapy for bacterial infections in cattle, particularly for the treatment of mastitis.
Results of the frequency of use of different tests for screening for p lactam antibiotics in milk were shown in Figure 1.
Beta lactam antibiotics residues in cow's milk: comparison of efficacy of three screening tests used in Bosnia and Herzegovina
Beta lactam ([beta]-lactam) group of antibiotics are the workhorse antimicrobial agents in routine management of patients, but the rising prevalence of extended spectrum [beta]- lactamase (ESBL) mediated resistance is giving clinicians a tough time to advise appropriate antimicrobials to their patients as the therapeutic options are limited.
Comparative in vitro activity of beta lactam / beta lactamases inhibitor combinations against gram negative bacteria.
Prevalence and antibiogram of extended spectrum beta-lactamase producing Escherichia coli