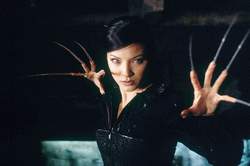 (pop culture)
Lady Deathstrike is a cyborg of super proportions. As an assassin and CEO of her father's Oyama Heavy Industries, she has a deep history rooted in Japanese culture, martial arts, and espionage. She was introduced as Yuriko Oyama, the daughter of criminal scientist and Daredevil enemy Lord Dark Wind (once World War II Japanese kamikaze pilot Kenji Oyama) in Daredevil vol. 1 #197 (1983), and as Lady Deathstrike in Alpha Flight vol. 1 #33 (1985). Lady Deathstrike is a highly skilled martial artist, who is known for her mastery of art of Kenjitsu and other samurai warrior skills. She is endowed with superhuman strength, speed, agility, endurance, and reflexes. Her skeleton has been artificially laced with the metal adamantium, making her bones virtually unbreakable. Although Lord Dark Wind developed a process for bonding adamantium to human bone, he did not experiment on his daughter. It was the villain Mojo's accomplice Spiral who had Yuriko converted into a cyborg in his “Body Shoppe.” A key opponent of Wolverine, Lady Deathstrike has also gone up against the U.S. government– sponsored Freedom Force team, other members of the X-Men, and Captain America. Lady Deathstrike's fingers have all been replaced with 12-inch-long adamantium claws, which she is capable of extending to twice their original length, making her a match for Wolverine, whom she has hunted in lands both far and near. She is able to cybernetically interface her consciousness with external computer systems, allowing for direct data access to her brain's memory and granting her the ability to remotely operate such systems. Deathstrike's body also includes an automatic self-repair program. However, the version of Lady Deathstrike in Marvel's Ultimate X-Men comic (2001–present) appears to be a mutant rather than a cyborg, and works for the Weapon X program. Actress Kelly Hu portrayed Lady Deathstrike in X2: X-Men United (2004), although in the film the character is referred to only by her real name of Yuriko Oyama. The character also appeared in X-Men: The Animated Series (1992–1997).
The Supervillain Book: The Evil Side of Comics and Hollywood © 2006 Visible Ink Press®. All rights reserved.

Feedback
Flashcards & Bookmarks ?
Please log in or register to use Flashcards and Bookmarks. You can also log in with
Flashcards ?
My bookmarks ?
+ Add current page to bookmarks
Mentioned in ?
References in periodicals archive ?
Blue Ranger actor Michael Copon (left), Rufio actor Dante Basco (middle), and Lady Deathstrike actress Kelly Hu during a press conference at TOYCON 2018 Poplife Fan Xperience (MANILA BULLETIN)
Actors Michael Copon and Dante Basco remember Pinoy heritage
These typical adolescent traits depicting the genuine difficulties of troubled, abandoned teenagers are also given ample screen time in the X-Men film series: namely Rogue, Pyro, Iceman, Lady Deathstrike, Shadowcat (among other characters).
Minorities depicted in comic book filmic adaptations
Rebecca Romijn-Stamos is excellent as the femme fatale Mystique and the rest of the great cast, which includes Halle Berry as Storm and Kelly Hu as Lady Deathstrike and James Marsden as Cyclops, also give strong performances.
Strong performances make mutant movie a hit
In a movie about freaks, we were the freaks within the freaks.''Kelly Hu as the long-clawed Lady DeathstrikeKelly Hu, the Hawaiian-born actress with just a touch of the Lucy Liu about her, makes her X-Men debut as Lady Deathstrike who, like Wolverine, is an adamantium-clawed product of the Weapon X programme.
I was getting a massage therapy on set; Epsom salt baths were a must.'' As for walking around wearing Lady Deathstrike's nine-inch nails - girls, forget about it.
The X factor; Given the commercial success of the first X-Men film it was a sure bet that Marvel's gaggle of genetically mutated superheroes would be back. Rob Driscoll meets the heroes (and villains) of the piece who tell him why this time the public can really believe the hype
Metal-skinned Colossus and Shadowcat are among the X Club Juniors making brief cameos, flamecontrolling Pyro (Aaron Stanford) and Lady Deathstrike (Kelly Hu), Stryker's deadly female Wolverine upgrade sidekick, both figure significantly in the film's emotional and physical landscape.
Culture: An X-ceptional sequel; Mike Davies is seriously impressed by X2 X2 CERT 12A 130 MINS
Fans' favourite Wolverine (hunky Hugh Jackman) really does cut loose with his freakish claws and his no-holds-barred battle with Stryker's sidekick Lady Deathstrike will become a classic.
HOT MOVIES: MUTANTS X-CEL AGAIN
X-FACTOR: Lady Deathstrike (above) and Nightcrawler are two of the new characters appearing in X-Men 2; HE'S BACK: Hugh Jackman will be reprising his role as Wolverine in the new X-Men film
GO! CINEMA: HEROES LEAP FROM THE PAGE TO THE SILVER SCREEN
In Wolverine's Rage - new out this month - you must master deadly attacks, such as the Bestial Rage, and defeat evil enemies like Sabretooth and Lady Deathstrike.
Mega Mirror: X-CITING TOYS AND GAME BOY GOODIES
Her most popular roles include playing Sorceress Cassandra in "The Scorpion King," and as the villain Lady Deathstrike in "X-Men 2." She also appeared on the popular TV series "The Vampire Diaries" and "Arrow." Kelly also did voice acting for animated series "Phineas And Ferb," "Teenage Mutant Ninja Turtles," and in video games as "Mortal Combat X" and "Batman: Arkham Origins."
Pop culture heroes expected at Toycon 2018