a radiation receiver designed to photograph faint celestial objects or their spectrums; its principle of operation is based on the conversion of faint optical radiation into a stream of electrons (photoelectrons). It is used as an attachment for a telescope. It was designed in the 1950’s by the French astrophysicist A. Lallemand. 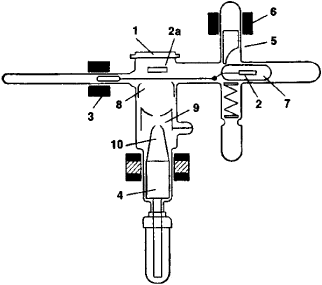 The Lallemand electron camera is a vacuum device in which the photoelectrons are recorded directly on a photographic emulsion that is placed in an evacuated bulb together with a photoelectric cathode (see Figure 1). Before being put into operation, the photoelectric cathode is sealed in a smaller bulb. After the air has been pumped out of the outer bulb of the device, the smaller bulb is broken by a hammer controlled by an electromagnet, and the cathode is moved into its operating position by an electromagnetic device. Radiation from the object being studied passes through an optical opening and is focused on the photoelectric cathode. The electrons emerging from the cathode are focused onto a photographic emulsion by three electrostatic lenses. Fine-grained nuclear emulsions that are very sensitive to electrons are usually used. For short exposures of faint objects the camera provides an increase in sensitivity by a factor of up to 10 as compared to ordinary photography; for exposures of about 1 hr, the sensitivity is increased by a factor of 30–40.