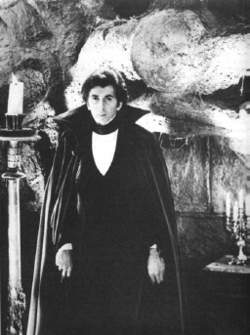 Frank Langella as the aristocratic and sensual Dracula in the 1979 version of Dracula.

Frank Langella, star of the 1979 film version of Dracula, was born in Bayonne, New Jersey. His parents were Frank Langella, a businessman, and Ruth Weil, a magazine editor. He attended Syracuse University and in 1959 was awarded the Syracuse Critics Award as Best Actor. He went on to study acting, dance, and voice with private teachers and launched a career that has included both acting and theatrical management. Langella made his stage debut in 1960 in The Pajama Game at the Erie Playhouse. In 1963 he made his New York debut in The Immoralist at the Bouwerie Lane Theatre. That same year he became one of the original members of the Lincoln Center repertory training company.

In 1967 Langella first appeared in the title role of Dracula at the Berkshire Theatre Festival. Three years later he made his film debut in The Twelve Chairs, a part that would be followed by more notable roles in Diary of a Mad Housewife and The Deadly Trap. In 1977, he attained a new level of recognition as the star in the revival of the Hamilton Deane/John L. Balderston version of Dracula, which in 1978 received two Tony Awards. He was later chosen to star in the movie version of Dracula directed by John Badham.

An accomplished actor, Langella brought a new depth and dimension to a part that had become rather narrowly stereotyped. Langella had reflected upon the Count’s character. Dracula would, he assumed, carry himself as a member of royalty who was on the one hand (in the presence of females) gracious and mannered, but on the other hand, ruled and commanded and used to having his own way. He also understood Dracula’s problem with immortality. While an extended life gave him wisdom beyond his contemporaries, it also brought a great weariness. In possibly the most important element of his performance, in large part attributable to the changing times, Langella highlighted the sensual and sexual elements of his relationship to Lucy Westenra (renamed Lucy Seward), the main character in the Deane/Balderston play. As Dracula, Langella would not only act with defensiveness when attacked, but also as a jealous lover. Langella clearly understood the relationship between Dracula and women. In reflecting on the role, he noted:

… the women have to want to make love with Count Dracula. And he must want to make love to them as a man loves a woman. not as a vampire goes after blood. The things that go on between Dracula and his women must be the result of her needs as well as his. Something is calling her, and it’s not fangs, or his wolf’s eyes.

Langella created the most appealing and human Dracula since Bela Lugosi. He played the character not as a traditional monster, but as a creature of a different species. Dracula was not so much cruel and evil as operating out of his very different nature. Langella took his place as one of the most memorable actors to assume the role of Dracula, though, for the sake of his career, he was able to walk away from the part and avoid being typecast. Thus, unlike that of Bela Lugosi and Christopher Lee, Langella’s portrayal consumed only a few years of his lengthy career. He followed his success as Dracula with other movies and with additional success on the stage. In 1980 he was able to return to Broadway as Salieri in the highly acclaimed Amadeus. Langella has continued to play a wide variety of roles on stage, with occasional movie roles. In 1981 he assumed the title role of Dracula’s contemporary in a television production of Sherlock Holmes. He returned to this role in 1987 in Sherlock’s Last Case in New York and Washington, D.C. In 2007, he won a Tony Award for Best Performance by a Leading Actor in a Play for his portrayal of Richard Nixon in “Frost/Nixon.” He subsequently played the same part in the movie adaptation for which he received an Academy Award nomination.