a gearset for transmitting rotation between parallel shafts. In a lantern-pinion gearset (see Figure 1), one of the gears, which is called a lantern pinion (2), has cylindrical bars, or trundles (3), instead of teeth. The teeth of the spur gear (1), which meshes with the lantern pinion, are generated along an equidistant curve related to an epicycloid or a hypocycloid (seeCURVE). An advantage of a lantern-pinion gearset over other types of gearsets is that the trundles may be made to rotate on their own axes, thus decreasing the friction losses in the gearing and reducing the wear at the surfaces of the gear teeth. 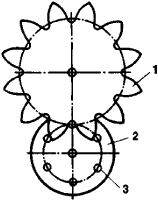 Lantern-pinion gearing is a special case of cycloidal gearing. Figure 1 shows a lantern-pinion gearset with external gearing. In this case, the lantern pinion and the spur gear rotate in opposite directions, and the trundles are located on the pitch circle of the lantern pinion (seeGEAR DRIVE). With internal gearing, the lantern pinion and the spur gear rotate in the same direction. In this arrangement, the trundles are located on a circle whose radius is larger than the radius of the pitch circle. Internal gearing makes it possible to achieve a difference of unity between the number of trundles and the number of spur-gear teeth. Such a difference provides a high gear ratio in a planetary reduction gear (up to 1:100 in a single reduction), together with a relatively high efficiency (about 0.75) and a low overall volume for the gear train.

Lantern-pinion gearsets are used mainly in planetary reduction gears and in instruments.