prefabricated elements of buildings and structures made from large factory-produced slab elements (panels) that are assembled on-site. Large-panel structures are one of the most progressive industrial types of structural elements. In modern construction they are used in building apartment houses, public and industrial buildings, roads, air-fields, dams, and canals. They have become most widespread in large-scale housing and civil construction, where the erection of buildings from large panels manufactured at housing construction combines and plants makes possible a reduction in construction time by a factor of 1.5–2.0 in comparison with erection of the buildings from brick or other traditional materials, as well as a decrease of 30–40 percent in labor expenditures at the construction site. The estimated cost of a square meter of housing space is 12–15 percent lower than in brick buildings.

The idea of large-panel housing construction—that is, the use of large panel-type elements for walls and floor slabs—was proposed by a number of engineers in the 1920’s and 1930’s. However, at that time such proposals were merely theoretical, as a consequence of the insufficient level of development of construction technology. The comprehensive scientific development of the large-panel factory method of housing construction and the construction of the first experimental large-panel apartment buildings took place in the USSR in the 1940’s and 1950’s by a group of staff workers from the Institute of Construction Engineering of the former Academy of Architecture of the USSR: G. F. Kuznetsov (director), B. N. Smirnov, N. V. Morozov, T. P. Antipov, A. K. Mkrtumian, lu. B. Monfred, and N. la. Spivak. The principles of the design theory and the system of large-panel buildings and the design of the panels were developed, and methods of stand and multiple-form manufacturing and assembly, as well as the basic specifications, were created. The first four-story apartment house of frame-panel design (on Fifth Sokolinaia Gora Street in Moscow; 1947-48), the first three-story and four-story frameless large-panel apartment buildings (Magnitogorsk, 1949–52), and a seven-story frameless building (Sixth Oktiabr’skoe Pole Street in Moscow; 1954) were built under the direction of the institute. The construction of these apartment houses showed in practice the technical advisability and great economic efficiency of the large-panel method. The experimental construction that was undertaken in subsequent years in Moscow, Leningrad, Kiev, Cherepovets, and other cities fostered the rapid development and spread of the large-panel method.

All the main parts of a building, including exterior and interior walls, floor slabs, roofs, and staircases, may be made up from large-panel structures. Large-panel structures are used in two main design schemes, frame-panel and panel (frameless) buildings. In frame-panel buildings, all the base loads are borne by the building’s frame, and the panels are usually used to fill the frame and as enclosure elements. Frameless buildings are assembled from panels that perform the load-bearing and enclosing functions simultaneously.

Large-panel structures for exterior walls consist of panels one or two stories in height and one or two rooms in width. The panels may be blind (without openings) or with window or door openings. In terms of design, the wall panels may be single-layer (solid) and multilayer (sandwich). Solid panels are manufactured from materials that have insulating properties and at the same time can perform supporting functions—for example, light-weight concrete, cellular concretes, and hollow ceramic stone. Sandwich wall panels are made with two or three layers; their thickness depends on the climatic conditions of the region and the physicotechnical properties of the materials used for the insulating layer and for the exterior (supporting) layers. The exterior layers of the panels are usually made from heavy, light-weight, or solid silicate concrete or from brickwork or sheeting (asbestos cement, steel, or aluminum). Polystyrene foam, rigid and semirigid rock wool panels, or cellular concretes may be used for the insulating layer. Wall panels are produced in completely finished form, with ready-to-paint surfaces and with windows and doors; the piping for heating and other systems and for wiring may also be installed in the panels. The surface of exterior wall panels is covered with decorative mortar or is faced with ceramic or other finishing tiles. After assembly, the joints between panels are filled with mortar or with lightweight or ordinary concrete and then sealed with elastic packing and special mastics.

The large-panel structures of interior walls may be non-load-bearing or load-bearing. In the first case, they are made from gypsum-slag concrete or from other materials that act as enclosures. In the case of load-bearing structures, the wall panels, which combine enclosing and load-bearing functions, are made from heavy or lightweight, silicate or cellular concrete, or vibration-set brick or ceramic work. The dimensions of the panels are determined by the dimensions of the rooms (in apartment houses), their height is equal to the height of a story, the width is equal to the depth or width of a room, and the thickness of the walls between rooms is usually 10–14 cm (between apartments, 14—18 cm).

The large-panel structures of floor slabs are usually made from reinforced concrete. The area of the floor slabs in apartment buildings usually equals the area of one room and may be as great as 30 sq m. Flagging panels have an area of 5–8 sq m. The large-panel floor slabs of housing, public, and administrative buildings are of both the solid and sandwich types; in the latter, provision is made for a sound-insulation layer to reduce air and impact noise. Composite floor panels, consisting of a load-bearing reinforced-concrete panel combined with a floor or ceiling panel and soundproofing, insulating, and other layers, are often used in housing construction.

The large-panel roof elements are used in housing and public buildings mainly in the form of combined atticless roofs, and in industrial buildings the roof panels have a span of up to 12 m.

The weight of large-panel structures depends on the method of dividing the building into prefabricated elements; it is usually 1.5–7.5 tons. 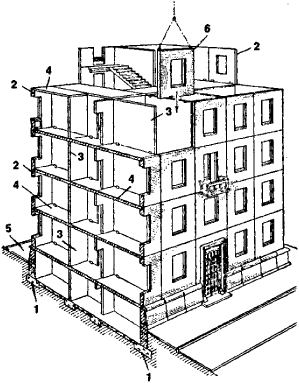 In erecting a building, the large-panel structures (wall, floor, and roof panels) are placed on horizontal mortar joints; the interior vertical joints are filled with cement or concrete. At the joints, the panels have inserts to which steel connecting pieces (cover plates) are welded, thus linking together all the panels and providing general stability of the building. Spatial rigidity of the building is provided by the use of stairwell structures and butt and intersectional crosswalls. Large-panel structures are used in the construction of high-rise buildings (see Figure 1).