The high power of laser radiation, coupled with its high directivity, makes possible the production of light fluxes of extremely high intensity by focusing. The highest radiation power (see Table 1) has been produced using solid-state neodymium-doped glass lasers (wavelength λ = 1.06 microns [μ]) and gas lasers (λ = 10.6 μ). The specific features of laser radiation have led to the discovery of a number of new physical phenomena, the range of which is expanding rapidly as the power of lasers is increased.

Developed vaporization of metals. When laser radiation (for example, pulses of a neodymium laser lasting several microseconds) with a radiation flux density of 106-108 watts per sq cm (W/cm2) acts on metals, the metal in the zone of irradiation disintegrates, and a characteristic crater appears on the surface of the target. The bright luminosity of a plasma flare, which is a moving vapor heated and ionized by the laser radiation, is observed near the target. The reaction pressure of the vapor ejected from the surface of the metal imparts a recoil impulse Q to the target (Figure 1). Figure 1. Motion of vapor near the surface of a metal and transfer of momentum to a target from incident laser radiation: (Q) momentum vector of vaporized substance, (—Q) momentum imparted to solid target

Vaporization takes place from the surface of a thin layer of liquid metal heated to a temperature of several thousand degrees. The temperature of the layer is determined by the equality of the absorbed energy and the losses to the cooling associated with vaporization. The role of thermal conduction in cooling the layer in the process is insignificant. In contrast to ordinary vaporization, this process is called developed vaporization.

The pressure in the layer is determined by the recoil force of the vapor and, when a gas-dynamic flow of vapor forms from the target, is one-half of the saturated vapor pressure at the surface temperature. Thus, the liquid layer is superheated, and its state is metastable. This makes it possible to study the conditions of maximum superheating of metals, under which rapid volumetric boiling-up of the liquid takes place. Upon heating to a temperature close to the critical temperature, an abrupt drop in electrical conductivity may take place in the liquid layer of the metal, and it may acquire the properties of a dielectric. In the process an abrupt drop in the light reflection coefficient is observed.

Irradiation of solid targets. As in the previous case, plasma is formed in the vapor flux from the vaporizing target upon irradiation of virtually all solid targets with millisecond pulses of laser radiation having a radiation flux density of the order of 107—109W/cm2. The plasma temperature is 104-105 °K. This method may be used to produce a large quantity of dense, chemically pure low-temperature plasma to fill magnetic traps and for various industrial purposes. The vaporization of solid targets by laser radiation is used extensively in engineering.

When nanosecond laser pulses with a radiation flux density of 1012-1014 W/cm2 are focused on a solid target, the absorbing layer of the substance is heated so intensely that it immediately becomes plasma. In this case it is no longer possible to speak of vaporization of the target or of a phase interface. The energy of the laser radiation is used to heat the plasma and advance the disintegration and ionization front into the target. The plasma temperature is so high that multiply charged ions, in particular Ca16+, are formed in it. Until recently, the formation of ions of such high multiplicity of ionization was observed only in the radiation of the solar corona. The formation of ions with a nearly stripped electron shell is also interesting from the standpoint of the possibility of conducting nuclear reactions using heavy nuclei in accelerators of multiply charged ions.

Laser spark (optical breakdown of a gas). When a laser beam with a radiation flux density of the order of 1011 W/cm2 is focused in the air at atmospheric pressure, a bright burst of light is observed at the focal point of the lens, and a loud sound is heard. This phenomenon is called the laser spark. The duration of the burst exceeds the duration of the laser pulse (30 nanoseconds) by a factor of 10 or more. The formation of the laser spark may be represented as consisting of two stages: (1) the formation at the focal point of the lens of primary (seed) plasma, which ensures strong absorption of the laser radiation, and (2) the spread of the plasma along the beam in the area of the focal point. The mechanism of formation of seed plasma is analogous to the high-frequency breakdown of gases; hence the term “optical breakdown of a gas.” For picosecond pulses of laser radiation (I ~ 1013—1014 W/cm2) the formation of seed plasma is also due to multiphoton ionization. The heating of the seed plasma by laser radiation and its spread along the beam (against the beam) are caused by several processes, one of which is the propagation of a strong shock wave from the seed plasma. The shock wave heats and ionizes the gas beyond the shock front, leading in turn to the absorption of the laser radiation—that is, to maintenance of the shock wave itself and of the plasma along the beam (light detonation). In other directions the shock wave attenuates quickly.

Since the lifetime of the plasma formed by laser radiation greatly exceeds the duration of the laser pulse, at great distances from the focal point the laser spark may be considered as a point explosion (the nearly instantaneous release of energy at a point). This explains, in particular, the high intensity of the sound. The laser spark has been studied for a number of gases at different pressures, under different conditions of focusing, and for various wavelengths of laser radiation, with pulses lasting 10~6-10−11 sec.

A laser spark may also be observed at much lower intensities if an absorbing seed plasma is generated in advance at the focal point of the lens. For example, in air at atmospheric pressure a laser spark is developed from electric-discharge seed plasma at a laser radiation intensity of approximately 107W/cm2; the laser radiation “captures” the electric-discharge plasma, and during the laser pulse the luminosity spreads over the caustic surface of the lens. When the laser radiation is of relatively low intensity, the spread of the plasma is due to thermal conduction, as a result of which the rate of spread of the plasma is subsonic. This process is analogous to slow combustion, hence the expression “laser spark in the slow combustion mode.”

Steady-state maintenance of a laser spark has been accomplished in various gases by means of a continuous CO2 laser with a power of several hundred watts. The seed plasma was developed by a pulse CO2 laser.

Thermonuclear fusion. Controlled thermonuclear fusion may be produced using laser radiation. For this purpose it is necessary to form an extremely dense and hot plasma with a temperature of approximately 108 °K (in the case of fusion of deuterium nuclei). For the energy liberation resulting from the thermonuclear reaction to exceed the energy added to the plasma during heating, the condition nτ ≧ 1014 cm−3 sec must be fulfilled, where η is the density of the plasma and τ is its lifetime. For short laser pulses this condition is satisfied at very high plasma densities. Here the pressure in the plasma is so great that it is virtually impossible to contain it magnetically. The plasma that appears near the focal point disperses at a speed of the order of 108 cm/sec. Therefore, τ is the time in which the dense plasmoid is unable to change its volume significantly (the inertial confinement time of the plasma). For thermonuclear fusion to occur, the length of the laser pulse tl obviously must not exceed τ. The minimum energy ∊ of the laser pulse for a plasma density of η = 5 × 1022 cm−3 (the density of liquid hydrogen), a confinement time of τ = 2 × 10−9 sec, and a plasmoid with linear dimensions of 0.4 cm should be 6 × 105 joules (J). Effective absorption of light by the plasma under conditions of inertial confinement and satisfaction of the condition n τ ~ 10−14 occure only for certain wavelengths λ:

is the critical wavelength for a plasma with density n. When η = 5 × 1022 cm−3, λ lies in the ultraviolet region of the spectrum, for which powerful lasers do not yet exist. At the same time, when λ = 1 μ (a neodymium laser), even for n = 1021 cm–3, corresponding to λcr, a value of ∊ = 109 J for the minimum energy, which is difficult to realize, is obtained. The difficulty of feeding the energy of laser radiation in the visible and infrared bands into dense plasma is fundamental. Various ideas exist for surmounting this difficulty; one such idea that is of interest is the production of a superdense hot plasma as a result of adiabatic compression of a spherical deuterium target by the reaction pressure of plasma ejected from the surface of the target under the action of laser radiation.

High-temperature heating of plasma by laser radiation was accomplished in the first time by optical breakdown of the air. In 1966–67, X-radiation from the plasma of a laser spark with a temperature of the order of (1–3) × 106 °K was recorded for a laser radiation flux density of the order of 1012-1013W/cm2. In 1971 a plasma with a temperature of 107 °K (measured on the basis of X-radiation) was produced by irradiating a solid spherical hydrogen-containing target with laser radiation having a flux density of up to 1016 W/cm2. A yield of 106 neutrons per pulse was observed in the process. These results, as well as the existing possibilities for increasing the energy and output of lasers, create the prospect of producing a controlled thermonuclear reaction using laser radiation.

Chemistry of resonance-excited molecules. A selective effect on the chemical bonds of molecules, making possible selective intervention in the chemical reactions of synthesis and dissociation and in the processes of catalysis, is possible under the action of monochromatic laser radiation. Many chemical reactions reduce to the scission of some chemical bonds in molecules and the formation of others. Interatomic bonds are responsible for the vibrational spectrum of a molecule. The frequencies of the spectral lines depend on the binding energy and mass of the atoms. A certain bond may be “built up” under the action of monochromatic laser radiation of the resonance frequency. Such a bond may easily be broken and replaced by another. Therefore, vibrationally excited molecules prove to be chemically more active (Figure 2). 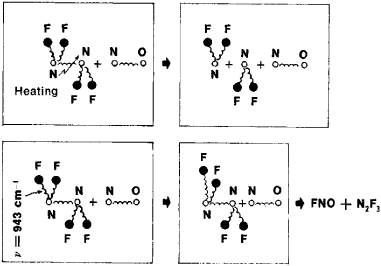 Figure 2. Diagram of the reaction between tetrafluorohydrazine (N2F4) and nitric oxide (NO) upon heating (top) and upon resonance excitation of the N — F bond by laser radiation (bottom). The wavy lines represent chemical bonds.

The effects mentioned above do not exhaust the physical phenomena caused by the action of laser radiation on matter. Transparent dielectrics are destroyed under the action of laser radiation. When certain ferromagnetic films are irradiated, local changes in their magnetic state are observed. This effect may be used in developing high-speed switching devices and computer memory units. When laser radiation is focused within a liquid, the light-hydraulic effect, which makes possible production of high pulse pressures in a liquid, occurs. Finally, for radiation flux densities of approximately 1018-1019 W/cm2, the acceleration of electrons to relativistic energies is possible. A number of new effects, such as the production of electron-positron pairs, are associated with this.