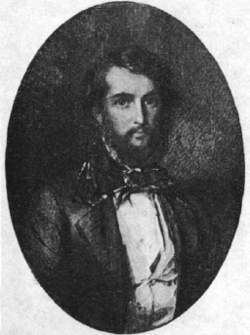 Joseph Thomas Sheridan Le Fanu, poet and author of short stories in the horror genre, was born on August 28, 1814, in Dublin, Ireland. His father was chaplain of the Royal Hiberian Military School, and Le Fanu was born on its premises. His great-uncle was the heralded Irish dramatist Richard Brimsley Sheridan. At age 14, the young Sheridan composed a long Irish poem, which launched his literary career.

Le Fanu’s formal literary career began in 1838 when “The Ghost and the Bone-Setter” was published in the Dublin University Magazine. Over the next 15 years he wrote 23 stories and two novels. Most of these were set in Ireland and focused on aspects of the Irish character. With few exceptions, they have generally been judged as mediocre, in part due to Le Fanu’s inability to relate to the Irish masses, whom he tended to stereotype because of the religious disagreements that separated him from them. However, he did begin his venture into supernatural horror, and in one of his stories, “Strange Event in the Life of Schalken the Painter,” he touched on themes later developed in his most famous work, “Carmilla.”

In 1861 Le Fanu purchased the Dublin University Magazine, which he edited for the next eight years. During the early 1860s Le Fanu wrote four novels. He continued to write novels for the rest of his life, but they never gained a popular audience. It was his short stories that brought him public attention. The year 1866 was a watershed year for Le Fanu; seven of his short stories appeared in Charles Dickens’s All the Year Round, among the most prestigious periodicals in England, launching an era of production of some masterful short literary pieces. At this time he was becoming increasingly pessimistic about life in general and the course of Irish politics in particular. He seems to have drawn on the negative aspects of his own life to write some of the great supernatural horror tales of the period.

Critics agree that the stories published in his collection In a Glass Darkly (1872) are his best stories, though they would disagree on which one is actually the best. However, the one that has attained the highest level of fame, even after long neglect of Le Fanu’s work, is “Carmilla.” “Carmilla,” only the third vampire story in English, is still one of the best. It told the story of Laura, the daughter of an Austrian civil servant named Karnstein, who was attacked by a female vampire variously named Carmilla, Mircalla, and Millarca. The story traced Laura’s early childhood encounter with Carmilla, an experience almost forgotten until the vampire reappeared when Laura was in her late teens. In the end, the victims and their family tracked Carmilla to her resting place and destroyed her. First published in several parts in Dark Blue magazine (December 1871 to March 1872), “Carmilla” provided a major building block of the modern vampire myth. It was read by Bram Stoker, a later resident of Dublin and, like Le Fanu, a graduate of Trinity College.

After his death in Dublin on February 7, 1873, Le Fanu’s reputation drifted into almost a century of obscurity, although he had as fans such writers as Henry James and Dorothy Sayers. A major reason for his neglect by the literary elite seems to be the subject of his writing. For many decades the great majority of literary critics held supernatural horror fiction in disdain, and thus neglected its more able writers. As gothic fiction came into its own in the last half of the twentieth century, critical reappraisal of the genre quickly followed. The new era of appreciation of Le Fanu really began in 1964 when E. F. Bleiler completed an edited edition of the Best Ghost Stories of J. S. Le Fanu, published by Dover. Then in 1977, under the editorship of Devendra P. Varma, Arno Press released the 52 volume Collected Works of Joseph Sheridan Le Fanu.

A journal for Le Fanu Studies may be contacted through the website http://www.js lefanu.com/lefanustudies.html. It is among vampire fans, however, that Le Fanu is most remembered. Next to Dracula (1897), “Carmilla” has become the single vampire story most frequently brought to the screen, and, like Dracula, it has inspired other stories of its leading vampire characters. Among the film versions of “Carmilla” are Blood and Roses (1961), Blood and Black Lace (1964), and The Vampire Lovers (1970).

One of its best adaptations is a made-for-television version entitled Carmilla that was presented in 1989 on Showtime’s Nightmare Classics. Additional versions, all entitled simply Carmilla, and more or less true to the original story, were made in 1999, 2000, and 2009. It has often been said that Vampyr, the classic vampire movie directed by Carl Theodor Dreyer, was based on “Carmilla,” but, except for being a story with a female vampire, it bears little resemblance to “Carmilla.” Le Fanu wrote a second, lesser-known story at least suggestive of vampirism, “The Room in the Dragon Volant,” which was made into a movie, The Inn of the Flying Dragon (originally Ondskans Vardshus), in 1981.

Feedback
Flashcards & Bookmarks ?
Please log in or register to use Flashcards and Bookmarks. You can also log in with
Flashcards ?
My bookmarks ?
+ Add current page to bookmarks
Mentioned in ?
References in periodicals archive ?
LE FANU, Sheridan. Carmilla, a vampira de Karnstein.
THE ANGEL IN THE HOUSE AND FEMME FATALE: THE REPRESENTATION OF VICTORIAN WOMAN IN CARMILLA, BY LE FANU/ O ANJO DO LAR E FEMME FATALE: A REPRESENTACAO DA MULHER VITORIANA NA OBRA CARMILLA, DE LE FANU