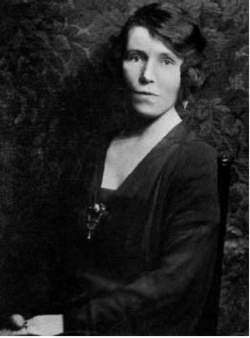 Gladys Osborne was born in Lythom, Lancashire, England, on May 28, 1882. As a young girl she saw many visions. In her autobiography, My Life In Two Worlds (London, 1931), she wrote,

In whatever direction I happened to be looking, the physical view of the wall, door, ceiling, or whatever it was, would disappear, and in its place would gradually come valleys, gentle slopes, lovely trees and banks covered with flowers, of every shape and hue. The scene seemed to extend for many miles, and I was conscious that I could see much farther than was possible with the ordinary physical scenery around me.

As a young singer, Gladys experimented with table tipping, working with two fellow entertainers in her dressing room. As a result of this she became greatly interested in Spiritualism. She developed her clairvoyance, clearly seeing spirits that came by way of the table. She said that she saw them “like clearly cut shadows, which showed up perfectly against the light background.” She also had a little clairaudience, though it was not as frequent, nor as developed, as the clairvoyance.

In 1914, at the age of thirty-two—and then married to Frederick Leonard—she was directed to become a professional medium by her spirit guide. This guide was a young Hindu girl named Feda, who claimed to be her great-great-grandmother. Leonard did become a professional medium, of such quality that she was called “The Queen of English Mediums,” “The British Mrs. Piper,” (a reference to the great American medium Mrs. Leonore E. Piper) and “Greatest Trance Medium.” Sir Arthur Conan Doyle said that she was “the greatest trance medium with whom the author is acquainted” (The History of Spiritualism London, 1926). She worked with Sir Oliver Lodge, bringing him communications from his son Raymond who had been killed in 1915, during World War I. In 1916, Sir Oliver Lodge published a book Raymond, or Life and Death. It was the founder of the British College of Psychic Science, James Hewat McKenzie, who introduced Leonard to Sir Oliver.

Occasionally when doing healings, Feda would defer to North Star, a Native American who did not speak but who brought about numerous healings. At the end of World War I in 1918, Leonard was engaged by the Society for Psychical Research. Out of seventy-three sittings, all of those involved agreed that “good evidence of surviving personality had been obtained and the complete trustworthiness of the medium could not be questioned.”

The psychical researcher Rev. C. Drayton Thomas continued with experiments with Leonard for many years. Some of the evidential messages that came through were of the type where the spirit would say, for example, “In tomorrow’s Times, on page 8, column 5, about six inches from the bottom, you will find a name which will recall intimate associations of your youth between the ages of 16-18.” Thomas wrote two books on his experiments with the medium, Some New Evidence for Human Survival (1922) and Life Beyond Death With Evidence (1928).

Gladys Osborne Leonard’s contribution to Spiritualism is summed up in the words of Sir Arthur Conan Doyle, “If the truth of Spiritualism depended upon Mrs. Leonard’s powers alone, the case would be an overwhelming one, since she has seen many hundreds of clients and seldom failed to give complete satisfaction.” Gladys Leonard died on March 19, 1968.