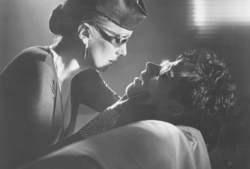 Catherine Deneuve (left) plays an alien vampire in The Hunger. 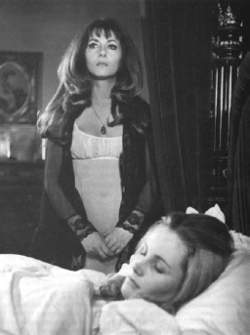 Ingrid Pitt as the legendary Carmilla Karnstein, hovers over a young female victim in Vampire Lovers, one of the many vampire films with lesbian overtones.

The incidents of lesbian vampiric relationships, which appeared first in the literary vampire tradition during the nineteenth century and more recently in the cinema, further illustrate the essential sexual nature of the vampire’s relationship with its victim. The lesbian vampire can also be seen as a special case of both the homosexual vampire and women as vampires. The earliest vampires were probably female, such as the Malaysian langsuyar and the Greek lamiai.

The historical reference for the lesbian vampire is Elizabeth Bathory, the so-called blood countess, who lived in the seventeenth century and whose story Bram Stoker used to develop the character of Dracula. The story of Bathory suggested several unique ideas about vampires not connected with the historical Dracula, Vlad the Impaler. As Radu Florescu and Raymond T. McNally have noted, in the Stoker novel, Dracula was seen as a Hungarian (not a Romanian), he drank blood, he grew younger as he drank blood, and he existed in an erotic atmosphere. Although none of these attributes could be derived from the story of Vlad, they all were descriptive of Elizabeth Bathory. She was related to Hungarian royalty, and she killed hundreds of young girls, whose blood she drained. Several who survived her torture sessions testified that she bathed in human blood to retain and restore her youth.

Although few have considered Bathory a lesbian, her victims were almost exclusively young women. She was assisted in her crimes by her Aunt Klara, who has been described as a lesbian who liked to dress in male clothing and “play men’s games.” As the vampire became the subject of modern literature, and the vampiric relationship became a means of illustrating erotic situations, the attraction of females to those of their own gender frequently appeared. On occasion this relationship was reciprocal, but more often than not it was a form of rape in which the vampire, generally a woman possessed of some social status or power, attacked or seduced a woman of no status, such as a student or a maid.

From “Christabel” to “Carmilla”: At the beginning of the English-language literary vampire tradition, lesbianism arose in Samuel Taylor Coleridge‘s poem “Christabel” (1816). Among the first poems about vampires, “Christabel” featured an “attack” upon the title character by Geraldine, the vampiric figure. Geraldine first appeared in the woods near the castle of Christabel’s father and told a story of having been brought there by kidnappers. Christabel invited Geraldine to take shelter in the castle. They shared a bottle of wine. Then, at Geraldine’s suggestion, Christabel undressed and got into bed. Geraldine joined her guest.

Whatever passed between them, more implied than stated, the morning found Geraldine refreshed and restored, “fairer yet! and yet more fair!” Christabel arose with a perplexity of mind and a deep sense of having sinned and went immediately to prayer. Christabel nevertheless took Geraldine to her father. Unfortunately, Geraldine beguiled the naive Sir Leoline, who ultimately dismissed his daughter and left with the vampire.

Later in the nineteenth century, the most famous vampire story with lesbian overtones was penned by Irish writer Sheridan Le Fanu. “Carmilla,” next to Dracula the vampire story most often brought to the screen, concerned Millarca Karnstein (also known by two other names made by scrambling the letters of her name—Carmilla and Mircalla), who attacked young women to suck their blood. “Carmilla” can be seen, in part, as an attempt to rewrite “Christabel” in prose form. Early in the story the vampire was stranded near a castle and was invited inside by the unsuspecting residents. Once accepted, she targeted nineteen-year-old Laura, the daughter of the retired Austrian official who had purchased the castle some years before. Carmilla began to “seduce” her hostess.

At one point Laura recalled, “She used to place her pretty arms around my neck, draw me to her, and laying her cheek to mine, murmur with her lips near my ear…. And when she had spoken such a rhapsody, she would press me more closely in her trembling embrace, and her lips in soft kisses glow upon my cheek.” Laura would try to pull away, but found herself without energy. She later described the strange nature of their relationship as simultaneously one of adoration and abhorrence. Later, Carmilla was tracked down and killed before she could kill Laura, but not before she had killed the daughter of a neighbor, General Speilsdorf.

Lesbian Vampires in the Movies: With vampirism as a metaphor for sexual behavior, a variety of sexual actions could be pictured on the screen in vampire movies. At a time when explicit lesbian behavior was banned from the movies, vampirism offered a means for women to relate to each other. Contemporary lesbian writers such as Bonnie Zimmerman and Pam Keesey have traced the first lesbian vampire to Dracula’s Daughter, a 1936 Universal Pictures production. Countess Zaleska (Gloria Holden) satiates her lust by drinking the blood of a series of beautiful models.

It was more than two decades later before another female vampire attacking female victims appeared on the screen. In 1957, Blood of Dracula (released in England as Blood Is My Heritage) pictured a teenage vampire (Sandra Harrison) attacking her classmates at an all-girls boarding school. That same year, the first of a series of movies based loosely upon the life of Countess Elizabeth Bathory appeared. In Lust of the Vampire (a.k.a. I, Vampiri) a doctor periodically stole the blood of women to give to the Countess in order to preserve her youthful appearance. Mario Bava filmed this early Italian entry in the vampire/horror field.

By far the most acclaimed of the several movies inspired by the Bathory legend is Daughters of Darkness (1971), in which a young couple met the still lively and beautiful Countess Bathory in a contemporary Belgian hotel. They were seduced and attacked by Bathory and her female traveling companion. The husband turned out to be a sadist, and the wife and Bathory combined forces to kill him. Although Daughters of Darkness was the most critically acclaimed of the Bathory films, the blood countess’ most memorable appearance was that portrayed by Ingrid Pitt in Hammer Films’ Countess Dracula (1972). The film was produced at a time when Hammer was allowing more nudity and explicitly sexual situations to invade its movies.

“Carmilla” inspired a host of films, possibly the best being the first, Roger Vadim‘s Blood and Roses (1960), made to showcase his then wife Annette Stroyberg. The story also underlies Hammer Films’ Karnstein Trilogy: Vampire Lovers (1970), Lust for a Vampire (1971), and Twins of Evil (1971). Such movies can be considered lesbian movies only by the most liberal of standards. They starred glamorous female stars, and their male direction and screenplays suggested something more closely approaching a male fantasy of lesbianism. Also, the movies of Jean Rollin frequently included lesbian characters pictured in much the same manner as pornographic movies that picture women engaged in sex scenes shot entirely for a male audience.

More closely portraying a lesbian relationship in a manner acceptable to lesbians was Vampyres (1974), which concerned the murder of a lesbian couple by a homophobic man. The two return from the dead as a lesbian vampire couple and work together attacking male victims. The Hunger, basically the story of an alien vampire and her human male lovers, has found an appreciative lesbian audience for the scene in which the vampire (Catherine Deneuve) seduced the doctor (Susan Sarandon), whom she contacted in hope of finding a cure for her lovers’ swift aging. Two other lesbian vampire movies, Mark of Lilith (1986) and Because the Dawn (1988), both explore the possibility of using the vampire image in a positive way for women.

Recent Additions: The growth of the lesbian subculture in the 1980s led to the production of significant new literature consciously written by lesbians for lesbians. Several volumes stand out. Pam Keesey has assembled two collections of lesbian vampire short fiction in Daughters of Darkness (1993) and Dark Angels (1995). The earlier volume included a chapter from the single piece of African-American lesbian vampire fiction, Jewelle Gomez’s The Gilda Stories (1991). Gilda was a vampire who was born into slavery and learned to survive over the decades in a world dominated by white males. Virago, Karen Marie Christa Minns’s first vampire novel, explored the relationship of a lesbian couple attacked by a vampire college teacher.

In contrast to the many male gay vampire books and anthologies that have appeared in recent years, only a few lesbian vampire novels have been published over the last decade, such as Crin Clazxton’s Scarlet Thirst (2002) and Finola Hughes and Digby Diehl’s Soapsuds (2005), leaving the short story as the most prominent place for new lesbian vampire literature At the same time, there have been few lesbian vampire relations pictured on film, apart from the made-for-males female-on-female sex scenes in some adult movies. Possibly the most notable lesbian themed vampire movie since the beginning of the new century is Eternal (2004) staring Caroline Neron as a modern day Elizabeth Bathory. The most prominent vampire-related lesbian character on television was Willow Rosenberg, the witch and vampire fighting companion on Buffy the Vampire Slayer, who emerged as a lesbian halfway through the series.