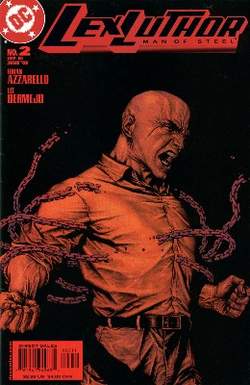 Feedback
Flashcards & Bookmarks ?
Please log in or register to use Flashcards and Bookmarks. You can also log in with
Flashcards ?
My bookmarks ?
+ Add current page to bookmarks
Mentioned in ?
References in periodicals archive ?
A Ming the Merciless B Lex Luther C Doomsday D The Mekon 6.
General Knowledge Quiz
WORDWISE: C WHO AM I: Chris Moyles 10 QUESTIONS: 1 London's Biggest Conversation, 2 The Snowman, 3 The great auk, 4 Loch Ness, 5 Ladyhawke, 6 Druridge Bay, 7 Peach, 8 Yorkshire, 9 Leonid Brezhnev, 10 Lex Luther
Time out extra
Next up, he's set to reprise the role of super-villain Lex Luther in DC Comic's Justice League, and has plans to adapt and direct Bream Gives Me Hiccups, the collection of short stories he published last year.
'Woody Allen is just so clever' STAR WATCH Jesse Eisenberg is a successful playwright, published author and Oscar-nominated actor, but he admits stepping on to the set of a Woody Allen movie triggered bouts of nerves. He tells Susan Griffin why he's grown to love the veteran film-maker's unique methods
Eisenberg is still on my naughty list for his abysmal portrayal of Lex Luther in Dawn of Justice and he certainly did himself no favours for a chance at redemption in this role.
Magic to mundane
Much better is Kevin Spacey as Lex Luther, who plots to use Kryptonite for world domination.
SATURDAY
Superman: Dawn of Justice, a follow-up to 2013's Man of Steel starring Henry Cavill as Superman, features Ben Affleck (sigh) as Batman, Jesse Eisenberg as Lex Luther, and Amy Adams as Lois Lane.
Gal Gadot Packs a Punch as Wonder Woman In New Trailer for 'Batman v. Superman'
Lex Luther and Batman will go in search of Superman.
'Man of Steel 2' aka 'Batman Vs Superman' Rumored Plot Spoilers: Henry Cavill Character Clark Kent to Die, Metallo & Lex Luther Villian?
"We had John Major as Superman, Kinnock as Lex Luther and Roy Hattersley as his bumbling side kick.
Phil road Stand-up chameleon bows out; Comedian Phil Cool's final tour
In a scheme that would make Lex Luther envious (but nothing as nefarious as anything that the Man of Steel's archenemy would dream up), That's Entertainment owner Paul Howley and manager Ken Carson petitioned the city to change the name of Marmon Place to Lois Lane.
City street becomes `Lois Lane'; Will small byway take on super powers?
Bald and sleek with pointed ears and pin-prick black eyes, the 51-year-old could pass for any villainous character in one of his comics, a real Lex Luther, who is fittingly the nemesis of one of the most famous characters he creates stories for - Superman.
MONSTER SUCCESS; LEGEND MORRISON IS JOINING FORCES WITH MEN IN BLACK DIRECTOR Top comic writer set to turn his novel Dinosaurs vs Aliens into a movie
And just like the moment Lex Luther has our caped hero on the brink of death, Usher has recently had to admit even he is not indestructible.
Usher 'I feel like a superhero'
Obvious roles for him to play would be Jonathan Kent or maybe even Lex Luther. It remains to be seen whether this is just the latest in a long line of Chinese whispers or whether this rumour really is about to fly.
COSTNER'S CAREER TO SOAR