Libration of the Moon


Also found in: Dictionary, Wikipedia.
Related to Libration of the Moon: Libration in latitude, Lunar libration
The following article is from The Great Soviet Encyclopedia (1979). It might be outdated or ideologically biased.

Libration of the Moon

the apparent periodic pendulum-like oscillations of the moon at its center, as a result of which the spots on the lunar disk seen by an observer on the earth appear to shift slightly first in one direction and then in the other. Optical (geometric) libration and physical libration are distinguished.

Optical libration in longitude occurs because the moon revolves about the earth nonuniformly while it rotates about its axis at a constant angular velocity. Figure 1 depicts an elliptic lunar orbit; 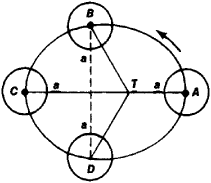 There is also diurnal, or parallactic, libration. This is a consequence of the earth’s diurnal rotation, as a result of which the observer on the earth views the moon in different directions. The diurnal libration can reach 1°. It is possible to see up to 59 percent of the moon’s surface from the earth because of the combined result of libration in latitude, libration in longitude, and diurnal libration. The remaining 41 percent of the surface of the moon can be observed only by means of space probes.

Physical libration is due to the moon’s being a triaxial ellipsoid whose semimajor axis as a consequence of optical libration periodically deviates by several degrees from the precise orientation to the center of the earth. A force couple, created as a result of the earth’s attraction, is applied to the moon and rocks it at its center of mass by an angle of up to 2′. Exact measurement of these oscillations makes it possible to determine the moments of inertia of the moon as a function of its figure and the distribution of masses in its body.

Feedback
Flashcards & Bookmarks ?
Please log in or register to use Flashcards and Bookmarks. You can also log in with
Flashcards ?
My bookmarks ?
+ Add current page to bookmarks
Mentioned in ?
References in periodicals archive ?
Because the total libration of the Moon depends on a combination of all of these physical factors (and others), calculating the libration zone was quite difficult before the advent of electronic computers.
Rocking and rolling: set your sights on the ever-changing lunar limb
Arthur Ernest Hodgson died; worked at the Natal Observatory; in 1908 he took a series of lunar photographs for a determination of the physical libration of the moon.
Centenaries for 2012
Both are important figures in the history of selenography, the former in connection with positional studies and lunar nomenclature, the latter with the figure and libration of the Moon.
Harold Hill and the south polar region of the moon