a large group of organic compounds occurring in many genera of lichen (for example, Ramalina, Evernia, Cladonia, Anzia). 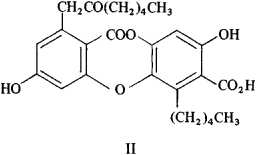 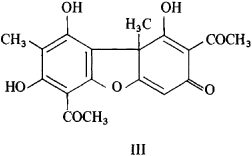 Several specific lichen acids are usually characteristic of each species of lichen, a fact that is useful in taxonomy. Aqueous lichen extracts have long been used in medicine, since the majority of lichen acids exhibit antibiotic activity. The chemical structure of all lichen acids is characterized by the presence of two polysubstituted phenol or phenol-carboxylic acid residues bonded to each other in a variety of combinations.

A depside structure is characteristic of the antibiotics Sferorodin and lecanoric (I), anacic, and ramalinic acids. The antibiotic physodic acid (II) is the simplest example of a depsidone structure. A dibenzofurane structure is typical of usnic acid (III), a widely occurring, effective antibiotic used in the treatment of skin diseases and tetanus. All of the lichen acid types mentioned are biosynthesized entirely from acetic acid residues, and most exhibit an active antimycobacterial effect. The fourth structural type characteristic of lichen acids (1,4-diphenyl butadiene) includes the poisonous vulpinic, chrysopetraric, and leprarinic acids; it also includes Epanorin and rhizocarpic acid, which contain the amino acid residues of leucine and tyrosine.

Feedback
Flashcards & Bookmarks ?
Please log in or register to use Flashcards and Bookmarks. You can also log in with
Flashcards ?
My bookmarks ?
+ Add current page to bookmarks
Mentioned in ?
References in periodicals archive ?
The symptoms may be attributed to the patients' skin sensitivity to sunlight and the photosensitizer nature of aromatic lichen acids, and they can be related to occupational activity (e.g.
2007), and it is not uncommon that structurally related lichen acids may have different activities (Atalay et al.
Gardner, C.R., Mueller, D.M.J., 1981, Factors affecting the toxicity of several lichen acids: effect of pH and lichen acid concentration.
High performance liquid chromatographic analysis of aliphatic lichen acids. Phytochem.
Effect of four lichen acids isolated from Hypogymnia physodes on viability of rat thymocytes.
Photosensitivity and allergy to aromatic lichen acids, Compositae oleoresins and other plant substances.
Table 1 Presence of common lichen acids in selected genera of the cetrarioid lichen core group listed in Randlane et at.
Secondary metabolites from cetrarioid lichens: chemotaxonomy, biological activities and pharmaceutical potential
These compounds are also known as lichen acids. Antiviral, antiprotozoal, antiproliferative, analgesic, anti-inflammatory and antipyretic activities of usnic acid known as secondary metabolite have been reviewed.
Insecticidal Effect of Usnea longissima (Parmeliaceae) Extract against Sitophilus granarius (Coleoptera: Curculionidae)