[′līt ‚bēm ä′sil·ə‚graf]
(electromagnetism)
An oscillograph in which a beam of light, focused to a point by a lens, is reflected from a tiny mirror attached to the moving coil of a galvanometer onto a photographic film moving at constant speed.
McGraw-Hill Dictionary of Scientific & Technical Terms, 6E, Copyright © 2003 by The McGraw-Hill Companies, Inc.
The following article is from The Great Soviet Encyclopedia (1979). It might be outdated or ideologically biased.

an instrument used for the visual observation and the automatic recording, by a photographic method, of physical processes that are periodic, aperiodic, or nonrecurrent. Examples of such processes include strain, temperature changes, pressure variations, and changes in rate. In the case of periodic processes, light-beam oscillographs are usable for repetition rates ranging from fractions of a hertz to 10–15 kilohertz. At the oscillograph input, a variation in a physical quantity that characterizes the process under investigation is converted by appropriate sensors into a proportional change in voltage or current.

A light-beam oscillograph (Figure 1) consists of the following: one or more mirror galvanometers, usually with a bifilar moving coil; an optical system; a recording medium, which may be either photosensitive paper or photographic film; a unit that moves the paper or film (not shown in Figure 1); and a device for visual observation.

The optical system forms and focuses a light beam and directs it to the galvanometer mirror. The beam is reflected from the mirror onto the sensitized film or paper, where it traces a curve that depicts the variation over time in the physical quantity under investigation. The time base of the curve is provided by the uniform movement of the recording medium in a direction perpendicular to the deflection of the light beam. The speed at which the recording medium moves in various light-beam oscillographs ranges from 1 to 10,000 mm/sec. The recorded curve is observed visually by means of a spherical mat screen, upon which impinges 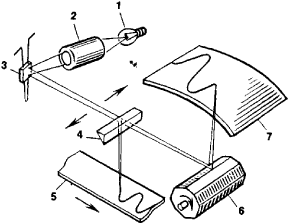 a portion of the light beam reflected from the mirror. The time base of the visually observed curve is provided by means of a uniformly rotating polyhedral specular drum. When the drum rotates, the light beam is reflected from its specular surfaces and periodically sweeps the screen. By adjusting the rotational speed of the drum, a stationary image of the curve may be obtained.