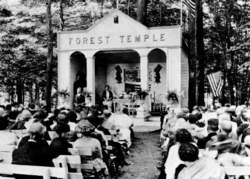 On December 3, 1855, the Laona Free Association was formed in Laona, New York. It was a reorganization of the older Religious Society of Free Thinkers and from it developed what is today known as the Lily Dale Assembly.

Lily Dale Assembly, beside Lake Cassadaga, is the world’s oldest and largest Spiritualist community. It presently covers in excess of 160 acres, and has its own fire department and post office. The community was founded in 1879, though it had its beginnings earlier than that, in 1855, a few miles from where Lily Dale is now located.

In 1871, Spiritualists started holding regular picnic meetings on the land of Willard Alden, beside Lake Cassadaga. These began simply as excursions for fun and recreation, but quickly led to the dedication of Alden’s Grove to the special care of the Spiritualists, with a series of one-day meetings featuring discussions and prominent lecturers. In 1877, Jeremiah Carter, one of the foremost members of the group, heard a voice telling him to “Go to Alden’s and arrange for a camp meeting.” The following morning he walked the six miles to the Alden Farm and sat down with Willard Alden to arrange the meeting. Extended camp seasons followed, the first such occurring on Tuesday September 11, 1877, and running till Sunday September 16, 1877. The following year the camp season was extended by ten days, the grounds were fenced in, and a cottage was built. Despite terrible rain storms, the crowd was bigger than before and an even longer meeting was planned for the next year.

Problems developed following Willard Alden’s death. His son Theodore Alden demanded rent for use of the grounds. This led to the board deciding to purchase their own property in 1879. Twenty acres were purchased on what is the present Lily Dale Assembly site. Mrs. Amelia Colby named the camp The Cassadaga Lake Free Assembly. In 1903, the name was changed to The City of Light, and three years later to The Lily Dale Assembly, because of the large number of water lilies on the lake. Albert Cobb was elected the first president of the association. Whole families toiled to clear trees and brush for camp sites, to build a horse stable, and to erect what became known as the Bough House. This was a building made of entwined boughs, with rough hewn logs for seats, that would be used for services. The first speaker was suffragette Elizabeth Lowe Watson.

The grounds were laid out for lots that could be rented for future cottages; the land was not to be sold. The rental fees for these lots were kept low with regard to the fact that the assembly was for everyone, regardless of wealth or social standing. On August 7, 1880, a hotel was opened. Originally the barn; it is known as a “hung suspension building.” When additional floors were needed, each floor was raised and the new additions placed underneath. It was originally known as The Grand Hotel but today is the Maplewood Hotel. The first cottage was built by a Mr. Sage on what is today the site of the Marion Skidmore Library building. By 1893, there were 215 cottages with approximately forty families living there year round.

The Lyceum (Spiritualist’s Sunday School) was started in a tent in 1881. By 1928, this had grown into the building currently there. In August 1883, a large and impressive auditorium was built, with a floor measuring fifty feet by fifty feet with eleven rows of raised chairs. A tent originally housed the library, though this was later moved into the Assembly Hall. In 1924, the present impressive library building was built.

In 1887, an additional eighteen acres of land were purchased and the following year the United States Postal Service officially recognized the community by installing a post office. In 1888, the Assembly Hall was built and became famous for its “Thought Exchange.” In 1892, construction started on the Octagon Building which today houses the Medium’s League. It is one of only seven such buildings in the state of New York. There was a dance school in Lily Dale and for a short while, there was even a Ferris Wheel there. This had to be removed, however, because the excessive noise of its steam engine disturbed the various programs.

Many celebrities regularly visited Lily Dale, including Susan B. Anthony, Sir Arthur Conan Doyle, Mae West, and the Russian Countess Alexandra Tolstoy (Leo Tolstoy’s daughter). It is said that Franklin and Eleanor Roosevelt also visited Lily Dale, but there seems no confirmation of that.

In 1895, the Alden House was purchased by Mrs. Abby Pettengill and renamed the Leolyn, after her granddaughter. Mrs. Pettengill then sold the building to the Assembly. The auditorium was remodeled in 1916, with seating increased to 1,200. Even so, many times during the history of Lily Dale people have stood three deep outside the auditorium in order to hear the lecture. A beautiful healing Temple was added by Louis Vosburg in 1955, under the direction of Thomas John (Jack) Kelly’s spirit guide.

The original Fox Family cottage was moved from Hydesville to the Lily Dale site in 1916, a gift from Benjamin Bartlett of Cambridge Springs, Pennsylvania. Tragically it was destroyed by a suspected arson fire in 1955, though some relics were saved, including the original peddler’s tin box and the Fox Family Bible. Both are now on display in the excellent Lily Dale Museum, run by an enthusiastic Ron Nagy and Joyce LaJudice.

As many as 30,000 people flock to Lily Dale each year. Today it is recognized internationally as a community that should be visited by every Spiritualist and everyone seeking comfort and proof of survival after death.