[′lim·ət ‚sīk·əl]
(mathematics)
For a differential equation, a closed trajectory C in the plane (corresponding to a periodic solution of the equation) where every point of C has a neighborhood so that every trajectory through it spirals toward C.
McGraw-Hill Dictionary of Scientific & Technical Terms, 6E, Copyright © 2003 by The McGraw-Hill Companies, Inc.
The following article is from The Great Soviet Encyclopedia (1979). It might be outdated or ideologically biased.

The limit cycle of a system of second-order differential equations

(r and ϕ are polar coordinates), whose general solution is r = 1 — (1 — r0)e-t, ϕ = ϕ0 + t (where r0 ≥ 0), has the stable limit cycle r = 1 (see Figure 1). The concept of limit cycle can be carried over to an nth-order system. From a mechanical viewpoint, a stable limit cycle corresponds to a stable periodic motion of the system. Therefore, finding limit cycles is of great importance in the theory of nonlinear oscillations. 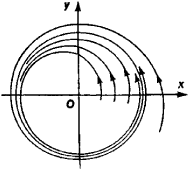 Feedback
Flashcards & Bookmarks ?
Please log in or register to use Flashcards and Bookmarks. You can also log in with
Flashcards ?
My bookmarks ?
+ Add current page to bookmarks
Mentioned in ?
References in periodicals archive ?
Then there exists [[epsilon].sub.0] = [[epsilon].sub.0] ([delta]) > 0, that for all [epsilon] [member of] (0, [[epsilon].sub.0]) Equation (4.1) has an unstable limit cycle for h = (1 - [epsilon])H.
Periodic Cycles in the Solow Model with a Delay Effect
For limit cycle, Lamerey diagram forms a rectangle (Figure 1b).
Estimation of the world economic system stability from 1963 to 2013 by using a discrete dynamic model
which have an invariant conic [x.sup.2] + [cy.sup.2] = 1, c [member of] R, and we prove the coexistence of large elliptic limit cycle that contains at least four small-amplitude limit cycles generated by Hopf bifurcations.
Limit Cycles and Invariant Curves in a Class of Switching Systems with Degree Four
A unique unstable limit cycle appears around the equilibrium O of system (4).
Global Analysis of a Lienard System with Quadratic Damping
then one limit cycle is bifurcated from the equilibrium [x.sup.0] at [a.sub.0].
Hopf Bifurcation Analysis of a New SEIRS Epidemic Model with Nonlinear Incidence Rate and Nonpermanent Immunity
At the same time, the nominal electric field-stretch response ([bar.E] - [lambda]) in Figure 4(b) and the nominal electric field-nominal electric displacement response ([bar.E] - [bar.D]) in Figure 4(c) show no clear limit cycle, indicating that there will be insignificant hysteresis in the viscoelastic DE for high frequency.
Dynamic Electromechanical Response of a Viscoelastic Dielectric Elastomer under Cycle Electric Loads
For [R.sub.a2] = -15.5k[ohm] a period-1 limit cycle is obtained, for [R.sub.a2] = 16.2k[ohm] a period-2 limit cycle is obtained, and chaotic attractors are obtained for [R.sub.a2] = 17k[ohm] and [R.sub.a2] = 18k[ohm].
A Novel Autonomous 5-D Hyperjerk RC Circuit with Hyperbolic Sine Function
As shown in this paper, provided that A(m[gamma]+ [delta]) < K(m[gamma]-[delta]), the phase portrait of the system of (15) is from the stable limit cycle, the orbit of which all other trajectories approach asymptotically.
The Holling Type II Population Model Subjected to Rapid Random Attacks of Predator
In region I, two kinds of coexisting attractors, including chaotic attractor and limit cycle, are revealed.
An Improved Memristive Diode Bridge-Based Band Pass Filter Chaotic Circuit
We assumed that a hyperbolic, attractive, and stable limit cycle describes the neural oscillations [33, 34].
A Consistent Definition of Phase Resetting Using Hilbert Transform
Caption: Figure 8: Complex limit cycle for (a) {a = 10 and d = 3} and (b) {a = 50 and d = 2}.
Improving the Complexity of the Lorenz Dynamics