(lŏn`jĭto͞od'), angular distance on the earth's surface measured along any latitude line such as the equator east or west of the prime meridianprime meridian,
meridian that is designated zero degree (0°) longitude, from which all other longitudes are measured. By international convention, it passes through the site of the Royal Observatory in Greenwich, England; for this reason, it is sometimes called the Greenwich
..... Click the link for more information. . A meridian of longitude is an imaginary line on the earth's surface from pole to pole; two opposite meridians form a great circle dividing the earth into two hemispheres. By international agreement, the meridian passing through the original site of the Royal Greenwich ObservatoryRoyal Greenwich Observatory,
astronomical observatory established in 1675 by Charles II of England at Greenwich and known as the Royal Observatory. It moved during 1948–57 to Herstmonceux Castle, Sussex; with the completion of the move, the observatory was renamed, and the
..... Click the link for more information.  at Greenwich, England, is designated the prime meridian, and all points along it are at 0° longitude. All other points on the earth have longitudes ranging from 0° to 180°E or from 0° to 180°W. Except where it is changed to account for populated areas, the international date lineinternational date line,
imaginary line on the earth's surface, generally following the 180° meridian of longitude, where, by international agreement, travelers change dates.
..... Click the link for more information.  lies along the 180° meridian. Meridians of longitude and parallels of latitudelatitude,
angular distance of any point on the surface of the earth north or south of the equator. The equator is latitude 0°, and the North Pole and South Pole are latitudes 90°N and 90°S, respectively.
..... Click the link for more information.  together form a grid by which any position on the earth's surface can be specified. The term longitude is also used in various celestial coordinate systems (see ecliptic coordinate systemecliptic coordinate system,
an astronomical coordinate system in which the principal coordinate axis is the ecliptic, the apparent path of the sun through the heavens. The ecliptic poles are the two points at which a line perpendicular to the plane of the ecliptic through the
..... Click the link for more information. ).
The Columbia Electronic Encyclopedia™ Copyright © 2013, Columbia University Press. Licensed from Columbia University Press. All rights reserved. www.cc.columbia.edu/cu/cup/

Longitude (properly called terrestrial longitude) refers to the distance of a given location east or west of 0° longitude (which runs through Greenwich, England, where the system of latitudes and longitudes was worked out in its present form). The expression “celestial longitude” refers to the angular distance (distance measured in degrees and minutes of an arc) that a planet or other celestial body is located east of 0° Aries. The numbers beside planets in a horoscope, which express their position in terms of a certain number of degrees and minutes of a particular sign, are celestial longitudes.

A distinction is made between astronomical and geodetic longitudes for the earth, depending upon the method of determination. Astronomical longitude on the earth’s surface equals the difference between the local time (mean solar or sidereal) at the point to be determined and the time at the prime (Greenwich) meridian (universal time) from astronomical observations, and depends upon the direction of the perpendicular line (normal to the geoid) at the given point. By international convention, this longitude is considered positive to the west, and in the USSR predominantly to the east, from 0° to 360° (or, as measured by a clock, from 0 to 24 hours). Geodetic longitude is determined by geodetic measurements (for example, by triangulation) from a certain reference point (in the USSR, from the Pulkovo Observatory) to the given point, and depends upon the direction of the normal at the point to the accepted reference ellipsoid. With the introduction of uniform ephemeris time in 1960, ephemeris longitude was established as well; this longitude is calculated from the meridian lying 1.002738ΔT seconds to the east of Greenwhich, where ΔT is the difference between the ephemeris time and universal time. In the middle of the second half of the 20th century, ΔT is close to 40 seconds of time, which corresponds to 10 minutes of arc. One of the coordinates in the ecliptic system of celestial coordinates is also called astronomical longitude.

[′län·jə‚tüd]
(geodesy)
Angular distance, along the Equator, between the meridian passing through a position and, usually, the meridian of Greenwich.
McGraw-Hill Dictionary of Scientific & Technical Terms, 6E, Copyright © 2003 by The McGraw-Hill Companies, Inc. 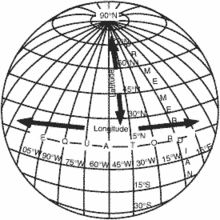 1. distance in degrees east or west of the prime meridian at 0? measured by the angle between the plane of the prime meridian and that of the meridian through the point in question, or by the corresponding time difference
2. Astronomy short for celestial longitude
Collins Discovery Encyclopedia, 1st edition © HarperCollins Publishers 2005

The east/west location on earth. For details of latitude/longitude positioning, see latitude.
Copyright © 1981-2019 by The Computer Language Company Inc. All Rights reserved. THIS DEFINITION IS FOR PERSONAL USE ONLY. All other reproduction is strictly prohibited without permission from the publisher.