(also the liquid-crystalline state or mesomorphic state), a state of matter in which it has the properties of a liquid (fluidity) and some properties of solid crystals (anisotropy of properties). Liquid crystals are formed by materials whose molecules have the shape of rods or elongated platelets. A distinction is made between thermotropic and lyotropic liquid crystals.

Thermotropic liquid crystals exist in the mesomorphic state within a definite temperature interval, below which the material is a solid crystal and above which it is an ordinary liquid. Examples include (I) para-azoxyanisole (in the temperature range 114°–135°C) and (II) ethyl azoxybenzoate (100°–120°C), as well as cholesterol propyl ether (102°–116°C).

Lyotropic liquid crystals are solutions of certain materials in certain solvents. Examples include aqueous soap solutions and solutions of synthetic polypeptides (poly-γ-benzyl-Lglutamate) in a number of organic solvents, such as dioxane and dichloroethane. 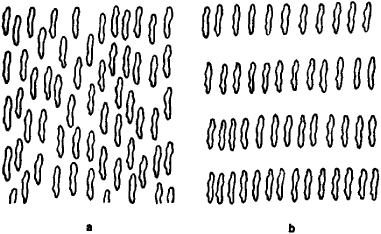 soap solutions), the molecular ends are fixed in the planes perpendicular to the longitudinal axes of the molecules (smectic planes, Figure l,b). Long-range order in the arrangement of the lateral axes and the centers of gravity of the molecules is also absent. Fluidity is due to the mutual sliding of the smectic planes.

Liquid crystals of the cholesteric type (a variety of nematic liquid crystals) also exist. Such liquid crystals are formed by materials (for example, cholesterol propyl ether) whose molecules have the shape of elongated platelets arranged parallel to each other. Long-range coordination order is absent. The fluidity of the material is due to the translational motion and rotation of molecules in their plane.

Liquid crystals exhibit anisotropy of elasticity, electrical conductivity, viscosity, magnetic anisotropy, optical anisotropy, and other anisotropic properties. The anisotropy of the properties of liquid crystals decreases with increasing temperature because of decreasing ordering of the molecular arrangement. Liquid crystals are oriented in a magnetic field with their axis of symmetry parallel to the lines of force of the magnetic field. In an electric field, the orientation of the axis of symmetry may be either parallel or perpendicular to the field’s lines of force.

Feedback
Flashcards & Bookmarks ?
Please log in or register to use Flashcards and Bookmarks. You can also log in with
Flashcards ?
My bookmarks ?
+ Add current page to bookmarks
Mentioned in ?
References in periodicals archive ?
"A liquid crystal is a relatively disordered fluid, yet it can template the formation of nanofibers with remarkably well-defined lengths and diameters," Abbott said.
Nanofiber Carpet: Sticky or Repellent
Caption: Figure 1: Experimental setup of voltage-controllable guided propagation in a nematic liquid crystals coupler.
Voltage-Controllable Guided Propagation in Nematic Liquid Crystals
MacPherson, "Terahertz properties of liquid crystals," in 2011 International Conference on Infrared, Millimeter, and Terahertz Waves, Houston, TX, USA, October 2011.
Radiation Pattern Reconfigurable Waveguide Slot Array Antenna Using Liquid Crystal
Liquid Crystals is, in summary, a timely and thought-provoking book that, despite its failure to fully address some pressing theoretical and methodological issues, will appeal to scholars in media history and related fields who are interested in the relationship between the human and the non-human.
Esther Leslie, Liquid Crystals: The Science and Art of a Liquid Form
Monochromatic light is passed through a liquid crystal thin film in two different modes of placement.
Surface Behavior and Thickness Measurement of Free Standing Thin Film of Liquid Crystal Compound Biphenyl (E7)
To get an idea of what happens in a liquid crystal, imagine a fluid made up of tiny needles which, instead of being arranged chaotically, all point in the same direction.
Disrupting liquid crystal pattern brings optical advantages
This review is focused on nematic liquid crystals (NLC), which have now been incorporated in a wide assortment of active devices throughout the optical-Terahertz-microwave spectrum [1-46].
Multiple Time Scales Optical Nonlinearities of Liquid Crystals for Optical-Terahertz-Microwave Applications
Starting price for the ethermVIEW thermographic analysis system is $15,000 depending on configuration and volume of liquid crystals provided.
Liquid Crystal Thermography System Measures PCB and Component Temperatures
Holographic polymer dispersed liquid crystals are known as H-PDLC.
Experimental conditions to obtain photopolymerization induced phase separation process in liquid crystal-photopolymer composite materials under laser exposure
The Ferens Distinguished Lecture entitled: 'Liquid Crystals: How a Hull invention helped to change the way we see electronic information', will be delivered by Professor Peter Raynes FRS, who was recently awarded an honorary doctorate by the University of Hull.
-From the lab to your living room - how Hull helped develop the LCD; The University of Hull's contribution to one of the biggest inventions of the 20th Century will be celebrated during a special lecture on Wednesday 24 October
Unfortunately, little information appears about properties of cutting fluids with liquid crystals additives.
Effectiveness of twisted nematic liquid crystals as water based cutting fluid additive and tap lubricant/Cholesteroliniu skystuju kristalu kaip tepimo ir ausinimo emulsijos priedo bei sriegiklio tepalo efektyvumas
That suggests liquid crystals can detect endotoxins at concentrations 10 times as low as currently possible.
Liquid crystals on your screen could help detect contaminated water!