Plane curves traced by a point which executes two independent harmonic motions in perpendicular directions, the frequencies of the motion being in the ratio of two integers. Such figures are widely used in frequency and phase measurements (see illustration). See Harmonic motion 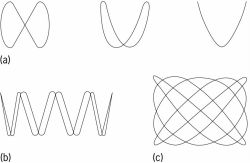 The cathode-ray oscilloscope furnishes the most important and practical means for the generation of the figures. The x-deflection plates of the tube are supplied with one alternating voltage, and the y-deflection plates with another. If the frequencies are incommensurable, the figure is not a closed curve and, except for very low frequencies, will appear as a patch of light because of the persistence of the screen. On the other hand, if the frequencies are commensurable, the figure is closed and strictly periodic; it is a true Lissajous figure, stationary on the screen and, if the persistence is sufficient, visible continuously as a complete pattern. See Frequency measurement, Oscilloscope, Phase-angle measurement

the closed paths described by a point that simultaneously performs two harmonic oscillations in two mutually perpendicular directions. They were first studied by the French scientist J. Lissajous (1822–80). The shape of Lissajous figures depends on the ratio of the periods (frequencies), phases, and amplitudes of the two oscillations. In the simplest case (equal periods), the Lissajous figures are ellipses that degenerate into line segments for a phase difference of 0 or π and reduce to a circle when the phase difference is π/2 and the amplitudes are Figure 1. Shape of Lissajous figures for various ratios of periods (1:1, 1:2, and so on) and phase differences

equal (see Figure 1). If the periods of the two oscillations do not coincide exactly, the phase difference and, consequently, the shape of the ellipse change continuously.

Lissajous figures are not observed if the periods differ substantially. However, if the periods are related as integers, the moving point will return to its original position in a period of time equal to the least multiple of the two periods, and a Lissajous figure with a more complex shape is produced.

Lissajous figures may be observed on the screen of a cathoderay oscilloscope. They result from the displacement of a luminous point if alternating voltages that are either equal or multiples of each other are fed to two pairs of deflector plates. The observation of Lissajous figures is a convenient method for studying the ratios of the periods and phases of oscillations, as well as the shape of the oscillations.

Feedback
Flashcards & Bookmarks ?
Please log in or register to use Flashcards and Bookmarks. You can also log in with
Flashcards ?
My bookmarks ?
+ Add current page to bookmarks
Mentioned in ?
References in periodicals archive ?
Lissajous figures also evoke the sequential spiraling patterns of plants and unfurling petals as recorded in Karl Blossfeldt's critical volume, Urformen der Kunst (Archetypes of Art, 1928)--an encyclopedic collection of natural forms that the diligent Neue Sachlichkeit photographer saw as fundamental to art.
Terry Winters: Matthew Marks Gallery
In a typical Pynchonian conflation of conceits, scientific experiment, hard rock lingo, and the rhythm of dance come together at The Scope, the green neon sign outside of which depicts "the face of an oscilloscope tube, over which flowed an ever-changing dance of Lissajous figures" (ibid.).
Mutual exclusion, oscillation, and ethical projection in The Crying of Lot 49 and The Turn of the Screw
More complex examples reveal links between the expansion of (cosq + i sinq), the graphs of Chebyshev polynomials, Lissajous figures and the Golden Section!
99 Points of Intersection: Examples--Pictures--Proofs
Resonances were identified from the time history as well as from Lissajous figures. When the structure was resonating, the accelerometer signal became sinusoidal, and signal conditioning was not necessary.
Limiting vibration in space lattices
Venus was now tracing fantastic Lissajous figures in the eyepiece.
A cure for quivering planet images