Lobachevskian geometry is a theory rich in content and with applications both in mathematics and physics. Its historical significance is that Lobachevskii by constructing it proved the existence of a geometry differing from Euclidean geometry. This heralded a new era in the development of geometry and of mathematics in general. One modern way of defining Lobachevskian geometry is to say that it is the geometry of a disk, that is, the interior of a circle (Figure 1), in an ordinary (Euclidean) plane,

with suitable changes of terminology. Specifically, the disk is called a plane and its points are called points in the “plane,” and its chords (such as a, b, b ‘, MN) are called lines; the transformations of the disk that send chords to chords are called motions. Accordingly, two figures in the disk are said to be congruent (equal) if there is a motion that sends one of these figures to the other. Any geometric fact described in this language proves to be a theorem or axiom of Lobachevskian geometry. In other words, any assertion of plane Lobachevskian geometry is an assertion of Euclidean geometry that pertains to figures in the disk but is expressed in the terms just introduced. It is clear that Euclid’s parallel postulate is not valid in our geometry, since through a point O not on a given chord a (that is, “line”) there pass infinitely many chords (“lines”) that do not intersect it (such as b and b’). Similarly, solid Lobachevskian geometry can be defined as the geometry of a Euclidean spheroid, that is, the interior of a Euclidean sphere, with suitable changes of terminology. Specifically, “lines” are chords, “planes” are plane sections of the spheroid, and “congruent” figures are figures that can be mapped to each other by transformations of the spheroid that send chords to chords. Thus, Lobachevskian geometry is meaningful and just as consistent as Euclidean geometry. The description of the same facts in different terms or, conversely, the description of different facts in the same terms is a characteristic feature of mathematics. This is clearly evident, for example, when a given curve is defined in different coordinate systems by different equations, or conversely, when a given equation represents different curves in different coordinate systems.

The following is an incomplete list of scholars before the 18th century who attempted to prove the fifth postulate.

(1) The ancient Greek mathematicians Ptolemy (second century) and Proclus (fifth century); Proclus’ proof was based on the assumption of the finiteness of the distance between two parallel lines.

(2) Ibn al-Haytham (Alhazen) of Iraq (turn of the 11th century); Ibn al-Haytham attempted to prove the fifth postulate on the basis of the assumption that the end of a moving perpendicular to a line describes a line.

(3) The Tadzhik mathematician Omar Khayyam (second half of the 11th century or the 12th century) and the Azerbaijan mathematician Nasir al-Din (Nasireddin) al-Tusi (13th century); in attempting to prove the fifth postulate, both Khayyam and Nasir al-Din proceeded from the assumption that two convergent lines, when produced, cannot diverge without intersecting.

(6) The British mathematician J. Wallis; Wallis based his proof of the fifth postulate (obtained in 1663 and published in 1693) on the assumption that for every figure there exists a similar but noncongruent figure.

The proofs of the geometers listed above amounted to replacing the fifth postulate with another, seemingly more obvious, assumption. The Italian mathematician G. Saccheri (1733) attempted to prove the fifth postulate by contradiction. Starting with a negation of Euclid’s postulate, Saccheri deduced many of its consequences. In the erroneous belief that some of these consequences led to contradictions, Saccheri concluded that Euclid’s postulate was proved. The German mathematician J. Lambert (c. 1766, published in 1786) undertook similar investigations; however, he did not repeat Saccheri’s mistake and admitted his inability to find a logical contradiction in the system he had constructed.

Attempts to prove the postulate continued in the 19th century. Particular attention should be paid to the attempts of the French mathematician A. Legendre. One of his proofs (1800) was based on the assumption that through every point within an acute angle it is possible to draw a line intersecting both sides of the angle; in other words, like all his predecessors, Legendre replaced the fifth postulate with another assumption. The German mathematicians F. Schweikart (1818) and F. Taurinus (1825) came quite close to constructing Lobachevskian geometry, but they did not explicitly state that the theory they had outlined was, from a logical point of view, as valid as Euclidean geometry.

The problem of Euclid’s fifth postulate, which occupied geometers for more than two millennia, was solved by Lobachevskii. His solution reduces to the fact that the postulate cannot be proved on the basis of the other premises of Euclidean geometry and that the adoption of a suitable negation of Euclid’s postulate makes it possible to construct a geometry that is just as meaningful as Euclidean geometry and free of contradictions. Lobachevskii advanced these ideas in 1826, and in 1829–30 published the work On the Foundations of Geometry, in which he set forth his theory. A work of similar content by the Hungarian mathematician J. Bolyai was published in 1832. As was later learned, the German mathematician K. F. Gauss also admitted the possibility of the existence of a consistent non-Euclidean geometry but concealed this idea fearing that he might be misunderstood. Although Lobachevskian geometry developed as a speculative theory and Lobachevskii himself called it an imaginary geometry, nevertheless it was Lobachevskii who considered it not as an intellectual exercise but as a possible theory of spatial relations. The proof of its consistency, however, was given later, when models of the new geometry were obtained, and thus the question of its substantive meaning and logical consistency was fully answered. 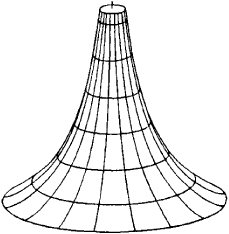 In 1871, F. Klein constructed the model of both the entire Lobachevskian plane and Lobachevskian space that was described above in which the interior of a circle serves as the plane and the interior of a sphere serves as the space. Incidentally, in this model the distance between the points A and B (Figure 1) is defined as In ((AN/AM) · (BM/BN)); the definition of angle is even more involved. 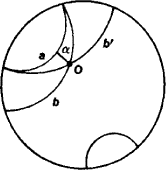 Later, H. Poincaré gave another model in connection with problems of the theory of functions of a complex variable. In this model the interior of a circle (Figure 3) is the hyperbolic plane, the arcs of circles orthogonal to the given circle and its diameters are the lines, and products of inversions with respect to the circles whose arcs serve as lines are the motions. Poincaré’s model is noteworthy in that the angles in it are represented by ordinary angles. On the basis of these considerations it is possible to construct a model of solid Lobachevskian geometry.

(1) In Lobachevskian geometry there are no similar but unequal triangles; triangles are equal if their angles are equal. Therefore there exists an absolute unit of length, that is, a segment distinguished by its properties just as a right angle is distinguished by its properties. For example, the side of a right triangle with a given sum of the angles may serve as such a segment.

(3) Through a point O not on a given line a there pass infinitely many lines coplanar with and not intersecting a. Among them are the two special lines b and b’, which are said to be parallel to the line a in the Lobachevskiian sense. In Klein’s (or Poincaré’s) model they are represented by chords (or arcs of circles) that have a common endpoint with the chord (or arc) a (Figures 1 and 3). Since such endpoints are not part of the model, b and b’ do not intersect a. The angle a between the line b (or b’) and the perpendicular from O to a—the angle of parallelism—decreases from 90° to 0° as the point O moves away from the line (in Poincaré’s model the angles in the ordinary sense coincide with the angles in the Lobachevskian sense, and therefore this fact can be seen directly in the model). The parallel b asymptotically approaches a in one direction and endlessly moves away from it in the other. For b’ the directions in question are reversed. In view of the complex definition of distance in the models, these facts are not directly apparent.

(4) If two lines have a common perpendicular, then they diverge to infinity on both sides of that perpendicular. Also, it is possible to draw perpendiculars to either line that do not meet the other.

(5) The curve whose points are equidistant from a line is not a line. It is called an equidistant curve.

(6) The limit of a family of circles whose radii tend to infinity is not a line but a curve called a horocycle.

(7) The limit of a family of spheres whose radii tend to infinity is not a plane but a surface called the horosphere; it is remarkable that the intrinsic geometry of a horosphere is Euclidean geometry. Lobachevskii used this fact to derive the formulas of trigonometry.

(8) The circumference of a circle is not proportional to the radius but increases more rapidly.

Lobachevskian geometry continues to be developed by many geometers. The various problems and objects studied in it include the solution of construction problems, polyhedra, regular systems of figures, and a general theory of curves and surfaces. A number of geometers have also developed mechanics in Lobachevskian space. These studies have not found direct applications in mechanics but have given rise to fruitful geometric ideas. Like Euclidean geometry, so too Lobachevskian geometry is a broad area of research.

when divided by t2, that is, when solved for the velocity of light, gives

Lobachevskian geometry has found a remarkable application in the general theory of relativity. If we assume that matter is distributed uniformly throughout the universe (on a cosmic scale this approximation is permissible), then it turns out that under certain conditions the geometry of space is Lobachevskian. Thus, Lobachevskii’s assumption that his geometry may be a possible theory of real space has been justified.

Feedback
Flashcards & Bookmarks ?
Please log in or register to use Flashcards and Bookmarks. You can also log in with
Flashcards ?
My bookmarks ?
+ Add current page to bookmarks
Mentioned in ?
References in periodicals archive ?
Russian mathematician Lobachevsky (1792-1856) composed Pangeometry the year before he died as a summary and culmination of his life's work in non-Euclidean geometry, now called Lobachevskian geometry. Blind by then, he dictated the treatise in Russian and in French, and for this first complete English version, Papadopoulos (mathematics, U.
Pangeometry
[Nuut, J.] Lobachevskian Geometry in Analytic Representation.
Tarski's system of geometry and betweenness geometry with the group of movements/Tarski geomeetria susteem ja liikumisruhmaga vahelsusgeomeetria
Let lines of direction be drawn from my eye to every point of a plane triangle that I see, and let there be interposed between this triangle and my eye a saddle-shaped surface of the kind used to model Lobachevskian geometry. The lines of direction will intercept this surface in a triangle one side of which curves outward and two sides of which curve inward in relation to the eye.
Thomas Reid's geometry of visibles
In Euclidean geometry, the three angles of a triangle add up to 360 degrees; in Lobachevskian geometry, they add up to less than 360 degrees; and in Riemannian geometry, they add up to more than 360 degrees.
Non-Euclidean geometry