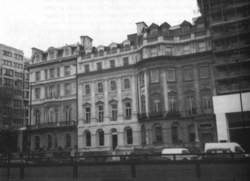 The house on the right with the bay windows is 138 Piccadilly, which scholars of Bram Stoker’s work have identified as one of Dracula’s houses in London. 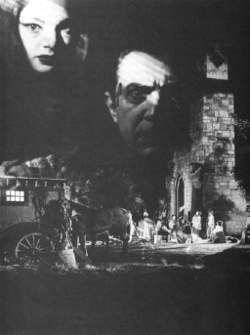 Publicity photo from the film Mark of the Vampire, which was a remake of the silent classic London after Midnight.

London, the capital of what is today known as the United Kingdom (England, Scotland, Wales, and Northern Ireland), was one of three major sites of action in Bram Stoker‘s Dracula (1897). Some of the sites mentioned by Stoker were entirely fictitious locations, but many were quite real, although a few have disappeared or changed names since the novel appeared in 1897, and some were slightly disguised by Stoker.

Action in the novel began with Jonathan Harker traveling to Transylvania to make arrangements for Dracula‘s move to England. The focus of their negotiations was an estate in the London suburb of Purfleet. Purfleet is a real place located on the north bank of the Thames River, downstream from London. Semi-industrialized and almost a suburb today, in the 1890s it was a quiet rural Essex Village some ten miles beyond the fringe of London’s East End. Carfax, the estate in Purfleet, had about 20 acres surrounded by a stone wall. On the land was an old house, dating to medieval times, and nearby a chapel. Stoker, through his character Harker, suggested that the name Carfax was a derivative of quartre face, referring to its four walls being aligned with the cardinal points of the compass. From his reading of The Oxford Dictionary of Etymology, Leonard Wolf has suggested that the name derived from the Anglo-Norman term carfuks, the significance being that it was a place where four roads met. Wolf further noted, quite correctly, that suicides were buried at crossroads and that people who committed suicide were often thought to return as vampires.

Dracula traveled to England by ship along with the native soil so necessary for his survival. He landed at Whitby and from there had the dirt shipped to his estate. It arrived from Whitby via rail into King’s Cross Station, a very real location, the southern terminus of the Great Northern Railway (which connected London with points north, including Whitby). From there they were then taken to Carfax by Messrs. Carter, Paterson & Co., a real cartage firm that was founded in 1860 and continued to operate in London during Stoker’s time. It was a prosperous firm with headquarters on Gorwell Road in London. In Stoker’s day, Purfleet was connected to central London by London, Tilbury and Southend Railway, which had its terminus at Fenchurch Street. The characters in Dracula could thus travel from Purfleet to central London in about 30 minutes.

Once in England, Dracula began an attack upon Lucy Westenra, his first victim, while she was still in Whitby, the northern town where Dracula initially arrived. However, the action soon moved to London. The Westenra fictional home, Hillingham, was a large mansion, reflecting a relatively wealthy family. The kitchen was in back, there were several bedrooms on the second floor, and maids’ rooms presumably occupied the third floor. It was probably located in the Haverstock Hills neighborhood on the slopes leading to Hampstead, and not too far from the Zoological Gardens. When Dr. Abraham Van Helsing arrived on the scene, he stayed at several of the city’s finer hotels, including The Great Eastern Hotel on Liverpool Street and the Berkeley at Berkeley Street and Piccadilly.

In one of Dracula’s earliest actions, he helped the wolf Bersicker escape from the Zoological Gardens. The Gardens were located in the northeast corner of Regent’s Park, one of London’s largest parks. The wolves’ cage was on the edge of the zoo near the lions’ house. Bersicker had only a short distance to travel to reach the Westenra home. The Harker residence was located outside of London, in Exeter. His law office was in Devonshire. At one point they came into London to attend the funeral of Harker’s former employee, Mr. Hawkins. Before returning to their home, they strolled from Hyde Park to Piccadilly, where the novel’s action periodically returned, and stopped in front of Guillano’s, one of the most fashionable court jewelers in London. (Later, its premises were replaced by one of the shops given extended frontage of the Park Lane Hotel.) Here they saw Dracula, appearing much younger than when Harker last saw him in the castle in Transylvania.

In the meantime, Lucy had died and was buried at what Stoker described as “a lordly death-house in a lonely churchyard away from teeming London; where the air is fresh and the sun rises over Hampstead Hill.” He spoke of the churchyard (or cemetery) at Kingstead. There was no Hampstead Hill or Kingstead, and it was not clear which site Stoker had in mind as Lucy’s resting place. Raymond T. McNally and Radu Florescu have suggested that he in fact was referring to Highgate Hill and the relatively well known Highgate Cemetery, which fits the basic description of Lucy’s resting place (one with impressive burial mausoleums and away from London). The cemetery was the only such structure near Jack Straw’s Castle, a still-existing inn located on Hampstead Heath, where Dr. Van Helsing and the other men dined before going to Lucy’s grave to put the stake in her heart. Once inside the cemetery, they found their way to Lucy’s resting place. Evidence suggested that it was actually in the Old Ground or Western Cemetery, probably in a somewhat secluded location near the middle of the cemetery. Afterwards, they found their way to a still-existing pub, The Spaniards Inn, and there caught a cab back into London.

Following the settling of Lucy’s situation, and the organization of Mina and the men into a covenanted group to destroy Dracula, Dr. John Seward‘s house near Purfleet increasingly became the center of the group’s campaign to defeat Dracula. Seward lived at his private asylum, which was actually located next door to Carfax. Their efforts would take them back to London as Dracula had distributed his boxes of dirt around the city. Of the original 50 boxes, six were carried to the east end to 197 Chicksand Street, Mile End New Town. This detached portion of Mile End was entirely surrounded by Spitalfields, just off Brick Lane in the heart of Jack the Ripper territory. Three of Ripper’s murders were committed just a few blocks away. (Stoker began writing Dracula just a year or so after the panic over the Ripper murders and in the preface he wrote for the 1898 Icelandic edition of Dracula made reference to them.) Part of Chicksand Street still exists today.

Another six of the boxes were dropped south of the Thames, on Jamaica Lane, a fictitious location. While there is no Jamaica Lane, there is a Jamaica Road, the main artery in Bermondsey, a warehouse district of London just east of Walworth, on the south side of the river. Nine boxes were delivered to a house in London’s fashionable West End, on the street called Piccadilly, a residence located near the end of the street farthest away from Piccadilly Circus, the popular shopping area where a number of streets converge and which today is a theater/nightclub spot. As early as 1973, the building at 138–139 Piccadilly was suggested as the location of Dracula’s residence in an article by Art Ronnie in the Los Angeles Herald Examiner. Interestingly, this building has been the London headquarters of Universal Pictures. In the 1890s, the building existed as two separate houses. Bernard Davies, cofounder and chairman of The Dracula Society, has suggested that 138 Piccadilly possessed the correct architectural and stylistic details as described in the novel, including a bow window, iron-railed balcony, and a backyard. Dracula finally left London and England from the docks along the Thames aboard the Czarina Catherine, a fictitious ship.