(lō`kē), Norse giant (or deity) who personified evil. He hated the gods of Asgard and continually sought to overthrow them. His worst exploit was the murder of BalderBalder
, Norse god of light; son of Odin and Frigg. He was the most beautiful and gracious of the gods of Asgard. His mother extracted oaths from all things in nature not to harm her son, but neglected the mistletoe.
..... Click the link for more information. , for which he was punished by Thor. It was prophesied that when Ragnarok (the doom of the gods) occurs, Loki, with the aid of his monstrous children—the Fenris wolf, the Midgard serpent, and the goddess Hel—would lead the enemies of heaven.
The Columbia Electronic Encyclopedia™ Copyright © 2013, Columbia University Press. Licensed from Columbia University Press. All rights reserved. www.cc.columbia.edu/cu/cup/ 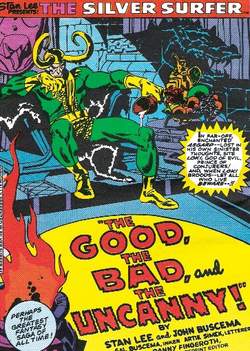 a popular character in Scandinavian mythology, a trickster in whom demonic and comic traits are interwoven. Loki participates with Odin in the creation of people and, as a companion to the straightforward Thor, uses cunning to help him in the struggle against the Giants. In Elder Edda (“Loki’s Blasphemies”), Loki appears as a perfidious reviler of the gods.

In eschatological myths, Loki is the father of horrible monsters—the universal serpent, Fenrir the wolf, and the goddess of the dead—and he is the instigator of the murder of the good hero Balder and a participant in the last battle before the end of the world (piloting the Ship of the Dead against the gods).