Loricifera (lôrˌĭsĭfˈərə), phylum of microscopic animals discovered in 1974. They have spiny heads and unsegmented bodies encased in a vase-shaped anterior that can retract into the posterior trunk. Although research shows that the sexes are separate and they have a large brain, little else is known about them. Because they adhere tightly to the marine gravel or sand in which they live, they are difficult to extract. They hatch as a larval stage, undergo several molts, and reach adult stage. As with the Gnathustomulida, this may account for their late discovery. Locierans appear to be most closely related to the kinorhynchs (Kinorhyncha) and priapulids.
The Columbia Electronic Encyclopedia™ Copyright © 2022, Columbia University Press. Licensed from Columbia University Press. All rights reserved.

A phylum of multicellular invertebrates. These marine organisms are entirely meiobenthic; that is, they never exceed a maximum dimension of 400 micrometers and live in sediments ranging from deep-sea red clay to coarse sand or shell hash. They have some of the smallest known cells in the animal kingdom. Although they have been found throughout the world, only 10 species representing three genera and two families have been described. Well over 50 species thought to represent several additional genera are known but remain undescribed.

Adult loriciferans are bilaterally symmetrical. The body is regionated into a mouth cone which telescopically protrudes anteriorly from the center of a spherical, appendage-ringed (up to 400 rings may be present) head; a short, usually plated neck region; and a distinctively loricated (thick-cuticled) thorax-abdomen (see illustration). The head, along with its withdrawn mouth cone, may be inverted into the thorax-abdomen, which is then closed anteriorly by the cuticle of the neck region. 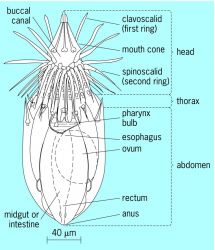 Loriciferans appear to be closely related to the Priapulida and perhaps less so to the Kinorhyncha. Certain structures of the mouth cone suggest affinities to the Tardigrada. Their presence may support the idea that proarthropods could have been developed from aschelminth ancestral stock. See Animal kingdom, Arthropoda, Kinorhyncha, Priapulida, Tardigrada