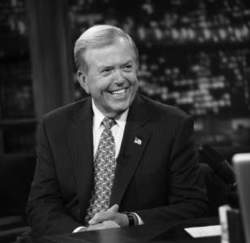 CNN television host Lou Dobbs had been a respected broadcaster for decades before he surprised everyone by accusing President Barack Obama of not being a U.S. citizen.

With his mellifluous voice and warm, expansive smile, Lou Dobbs was the genial host of “Lou Dobbs Tonight” on CNN for nearly three decades. There he discussed current business affairs with an expertise that made his cable program one of the most popular of its kind on television. Dobbs had been with CNN since its founding in 1980 and had served as an anchor, managing editor, and executive vice president. He was the last of the original anchors on the network. Then, unfortunately, he got bitten by an extremely virulent conspiracy bug.

On July 15, 2009, he questioned the validity of President Barack Obama’s birth certificate while on the air. Many of his loyal viewers listened and watched in disbelief as Dobbs became a “birther” before their very eyes. He continued on subsequent programs to question the president’s fitness for office, and he went so far as to suggest that Obama might be an undocumented, illegal alien. And while he was on the topic of illegal aliens, Dobbs began a systematic series of attacks on Latinos that soon had civil rights groups calling for him to cease and desist. It was one thing to hear Dobbs openly defending the Minutemen, the vigilante militia who patrolled the Mexico–U.S. border hunting down illegals, but then his rants became much worse—and less supported by facts.

Among Dobbs’ vitriol against Latino illegals was the following:

On November 11, 2009, Dobbs announced to his audience that that evening’s broadcast would be his last on CNN. In explaining his departure from the network that had been his home for nearly thirty years, Dobbs said that he needed “to engage in constructive problem solving, as well as to contribute positively to a better understanding of the great issues of the day, and to continue to do so with the most honest and direct language possible.”

Scores of offended viewers and civil rights groups were unanimous in their rebuttal that for many years during his tenure at CNN, Lou Dobbs had been neither constructive nor positive in dealing with the nation’s more delicate issues.

On November 10, 2010, the FOX Business Network announced that it had signed a multi-year contract with Lou Dobbs to host a daily program beginning in 2011. Lou Dobbs Tonight is currently telecast each night at 7:00 Eastern Time.

Feedback
Flashcards & Bookmarks ?
Please log in or register to use Flashcards and Bookmarks. You can also log in with
Flashcards ?
My bookmarks ?
+ Add current page to bookmarks
References in periodicals archive ?
While the president personally lobbied him to "conclude this thing as quickly as possible," as Burr later put it to the New York Times, the senator became a target of one of Trump's biggest cable news defenders, Fox Business Network's Lou Dobbs. "My God, the head of Senate Intelligence Committee, he has absolutely abandoned his responsibility," Dobbs told his viewers in late 2017.
INVESTIGATE LESS, SMILE MORE: Sen. Richard Burr walks the line between probing the Trump-Russia scandal and providing cover for the president
He then referred to right-wing TV commentators Lou Dobbs and Peter Schweizer, writing that the media "suppressed negative stories on Hillary Clinton, and boosted negative stories on Donald Ttump".
Trump's spelling errors unpresidented for a head of state
But outrage over the film did not reach a crescendo until last week, when the movie became a hot topic across "Fox News" networks with hosts including "Fox Business" hosts Maria Bartiromo and Lou Dobbs and "Fox News'" Laura Ingraham.
Violent movie 'The Hunt' cancelled after mass shootings
He then referred to right-wing TV commentators Lou Dobbs and Peter Schweizer, writing: "Lou Dobbs stated that this is a fraud on the American public.
Now Trump can't even spell his own name on Twitter
It all sounded good until I watched Kevin Cernekee, a Google engineer, say terrible things about what they did in 2016 and that they want to 'Make sure that Trump losses in 2020.' Lou Dobbs stated that this is a fraud on the American public.
Trump says watching Google 'very closely'
President Trump late Thursday&nbsp;tweeted the edited clip, which first appeared on Fox Business' "Lou Dobbs Tonight," along with the text: "PELOSI STAMMERING THROUGH NEWS CONFERENCE."
Hillary Clinton Accuses Trump, 'Cronies' Of Distributing 'Sexist Trash' In Pelosi Videos
Lou Dobbs raised the concern on his popular Fox Business Network program on April 4, stating, "China and Russia are engaging us in almost every quarter in this hemisphere.
Communist Chinese Moving Into the Caribbean
The president is an avid watcher of Fox News, and good economic news is regularly touted on programs hosted by some of his favorites, such as Sean Hannity and Lou Dobbs.
Fact check: President Trump's repeated claim -- 'The greatest economy in the history of our country'
Because of media coverage for his then named NeoIT business and its premier clients, Atul was invited to New York to participate as a guest on CNN's Lou Dobbs Tonight.
"...You Aren't Always Right. You Should Listen to Other People, Too." 2018 IAOP Leadership Hall of Fame Inductee, Atul Vashistha Shares the Advice That Drives His Success
Thus, earlier this week, FOX News host and Trump supporter Lou Dobbs tweeted this about McMullin:
FOX's Lou Dobbs Tried to Go After Trump's Opponents for their Mormonism. It Didn't Go Well
Encyclopedia browser ?
Full browser ?
CITE
Site: Follow: Share:
Open / Close