1710–74, king of France (1715–74), great-grandson and successor of King Louis XIV, son of LouisLouis,
1682–1712, titular duke of Burgundy; grandson of King Louis XIV of France. He became heir to the throne on the death (1711) of his father, Louis the Great Dauphin. François de Fénelon was his tutor and wrote Télémaque for his use.
..... Click the link for more information. , titular duke of Burgundy, and Marie Adelaide of Savoy.

The house of Valois-Orléans was founded by Louis, duc d'Orléans (see separate article), whose assassination (1407) caused the civil war between Armagnacs and Burgundians.
..... Click the link for more information. , family) as regent. After the regent died (1723), the king was guided by André Hercule de FleuryFleury, André Hercule de
, 1653–1743, French statesman, cardinal of the Roman Catholic Church. Tutor of the young Louis XV, he became, at the age of 73, chief adviser to the king and virtual ruler of France (1726–43).
..... Click the link for more information. , his main adviser from 1726. When Fleury died in 1743, the king decided not to appoint a chief minister. Louis, however, lacked both the will and interest to govern forcefully, and his reign was influenced by a succession of favorites. Of these, Mme de PompadourPompadour, Jeanne Antoinette Poisson Le Normant d'Étioles, marquise de
, 1721–64, mistress of King Louis XV of France. She was the king's mistress for about five years after 1745 and remained his confidante until her death.
..... Click the link for more information.  and her adherents were the most important and were in favor from the 1730s until 1764. The comtesse Du Barry was installed in 1768 and retained her influence until the king's death.

The war broke out when, on the strength of the pragmatic sanction of 1713, the Austrian archduchess Maria Theresa succeeded her father, Holy Roman Emperor Charles VI, as ruler
..... Click the link for more information. ) and, after a switch of alliances that realigned (1756) France with Austria, in the Seven Years WarSeven Years War,
1756–63, worldwide war fought in Europe, North America, and India between France, Austria, Russia, Saxony, Sweden, and (after 1762) Spain on the one side and Prussia, Great Britain, and Hanover on the other.
..... Click the link for more information. . The Treaty of Paris (see Paris, Treaty ofParis, Treaty of,
any of several important treaties, signed at or near Paris, France. The Treaty of 1763

The Treaty of Paris of Feb. 10, 1763, was signed by Great Britain, France, and Spain.
..... Click the link for more information. , 1763), ending the Seven Years War, marked the loss of most of France's colonial empire and a low point in French prestige on the Continent.

The domestic abuses of Louis XIV's rule and the disastrous financial policy of the regency were partly liquidated by Fleury, but the extravagances of Louis XV's court, the expense of warfare, and the defeat of attempts at reform left the monarchy weak by the time of the king's death. Efforts to reform the inequitable tax system failed, as did the attempt by René Nicolas de MaupeouMaupeou, René Nicolas de
, 1714–92, chancellor of France (1768–74). He was president of the parlement of Paris before he succeeded his father as chancellor.
..... Click the link for more information.  to suppress opposition to reform from the parlementparlement
, in French history, the chief judicial body under the ancien régime. The parlement consisted of a number of separate chambers: the central pleading chamber, called the Grand-Chambre; the Chambre des Requêtes
..... Click the link for more information. .

Throughout Louis's reign, the aristocracy asserted more influence, and the upper bourgeoisie gained more financial power. The country knew general prosperity, but the government was near bankruptcy. The apathy of Louis XV in the face of these problems found expression in the saying "Après moi le déluge" [after me, the flood], wrongly attributed to the king himself. The failure of the monarchy to solve its fiscal difficulties led directly to the French RevolutionFrench Revolution,
political upheaval of world importance in France that began in 1789. Origins of the Revolution

Historians disagree in evaluating the factors that brought about the Revolution.
..... Click the link for more information.  during the reign of Louis's successor, Louis XVILouis XVI,
1754–93, king of France (1774–92), third son of the dauphin (Louis) and Marie Josèphe of Saxony, grandson and successor of King Louis XV. In 1770 he married the Austrian archduchess Marie Antoinette.
..... Click the link for more information. . 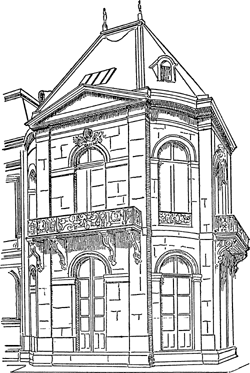 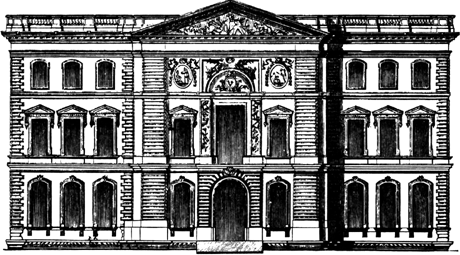 Louis XIV style: central compartment, northern façade, Louvre
The Classical and Rococo style in France under the rule of
McGraw-Hill Dictionary of Architecture and Construction. Copyright © 2003 by McGraw-Hill Companies, Inc.

1710--74, king of France (1715--74); great-grandson of Louis XIV. He engaged France in a series of wars, esp the disastrous Seven Years' War (1756--63), which undermined the solvency and authority of the crown
Collins Discovery Encyclopedia, 1st edition © HarperCollins Publishers 2005

Feedback
Flashcards & Bookmarks ?
Please log in or register to use Flashcards and Bookmarks. You can also log in with
Flashcards ?
My bookmarks ?
+ Add current page to bookmarks
Mentioned in ?
References in periodicals archive ?
Orleans's firm yet supple hand resolved the crisis of Louis XIV's final years, and Louis XV returned to Versailles in 1722; but an increasingly powerful Paris nonetheless permanently ended Versailles's short-lived monopoly as the hub of royal absolutism.
Paris ou Versailles? La monarchie absolue entre deux capitales 1715-1723
One of the most fascinating, and least known, exhibits is the series of five panels painted on canvas by Louis XV's queen, Maria Leszczynska, with the help of court artists and installed in her interior cabinet in 1761 (Fig.
Object relations: Selma Schwartz applauds a survey of 18th-century cultural exchange between France and China
The two basic options for furniture are, on the other hand, the rectilinear veneered style; and, on the other hand, the more extravagant bombe shapes associated with Louis XV. The styles can be mixed for a more eclectic look.
Creating a look
She also inspired works by de Lalande and Lully, among others, and was the obsession of the besotted Louis XV of France.
A burst of Bordeaux brilliance; MUSIC
Corentin leads a provincial life until his paintings, commissioned by Louis XV's mistress, launch him into Parisian society (see WLT, Mar.
Pierre Michon: The Eleven
Perfume came into its own with the court of Louis XV, named "La courparfumee"(the perfumed court).
Parfums de Marly unveils their latest feminine line
Legendary areas, such as the Entrance hall, and the Wine Cellars, and emblematic venues, such as the Bar Amricain, Salle Empire, Louis XV and the Grill, will be untouched.
Hotel Business News - Europe
Approaching marriageable age and now forbidden to play the violin or compose, Nannerl chafes at the limitations imposed on her gender, but a friendship with the son and daughter of Louis XV offers an alternative.
The life of a musical prodigy
The author's approach is seen in the first entry--absolute monarchy--which he argues is a misnomer for the reigns of Louis XIV, Louis XV and Louis XVI as each was restrained by a variety of forces and institutions.
A New Dictionary of the French Revolution
The grand entry hall showcases a rare, 18th-century French longcase clock and a French Louis XV gilded marble-topped console.
Encore! The second act to a stately home's design renovation is a French-inspired success
TODAY CONSTITUTION DAY (IRELAND) 1721: Madame de Pompadour, infamous mistress of Louis XV, was born in Paris.
ON THIS DAY IN ..
1) The Palatial French 19th century Louis XV style gilt-bronze and Baccarat crystal chandelier in grand foyer.
The Spelling Manor Palatial Chandeliers, Mantels and Wall Lights Acquired by Jan's & Co. Fine French Antiques, Inc. in Los Angeles