(lo͞ord), town (1990 pop. 16,581), Hautes-Pyrénées dept., SW France, at the foot of the Pyrénées. It is famous for its Roman Catholic shrine where Our Lady of Lourdes (Feast: Feb. 11) is believed to have repeatedly appeared (1858) to St. BernadetteBernadette, Saint
, 1844–79, French peasant girl who reported seeing the Virgin Mary in apparitions at a grotto near Lourdes, her home, in 1858. She was born Marie Bernarde Soubirous. The authorities, skeptical of her visions, subjected her to severe examinations and abuse.
..... Click the link for more information. . Millions of people make the pilgrimage to Lourdes each year, drawn by their faith in the miraculous cures attributed to the waters of the shrine. 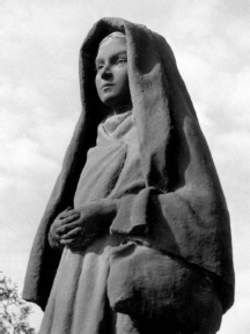 A statue of Saint Bernadette commemorates the famous appearance of the Virgin Mary at Lourdes, France, where she visited the young Bernadette Soubirous on several occasions in 1858. Getty Images.

Possibly the most well-known apparition of the Virgin Mary occurred at Lourdes, a small town in southern France near the Spanish border. Here a young girl, Bernadette Soubirous (1844–1879), had visions of the Virgin over a period of six months in 1858. The initial vision occurred on February 11, within days of her receiving her first communion. As she searched for wood near a grotto, a moving rosebush caught her attention, and shortly thereafter a young and beautiful woman appeared above the rosebush. Bernadette dropped to her knees and began to pray, the woman joining in. The woman then disappeared.

Over the next six months, the Lady appeared on eighteen occasions. She began to speak to Bernadette during the third apparition. During her ninth appearance, the Lady told Bernadette to dig in the ground, then drink from and bathe in the water that would emerge. The spring that subsequently emerged was designated as a healingspring of water for all, and a chapel was to be built at the site.

When the naïve and somewhat ignorant Bernadette asked the local priest to build the chapel requested by the unknown woman, the priest instructed Bernadette to inquire as to the identity of the Lady. In the last apparition the Lady identified herself as the Immaculate Conception. The concept of immaculate conception, that the Virgin Mary had been born without original sin, was then being debated by Catholic theologians. (Among non-Catholics, immaculate conception is often confused with Jesus’ birth from a virgin, rather than Mary’s birth without sin.) This notion coming from Bernadette helped convince the parish priest that she had, in fact, seen the Virgin.

Bernadette’s claims to having seen the Virgin met with mixed responses from an increasingly secularized French public and government. While Lourdes became famous as a healing shrine, the government occasionally moved against it and at one point closed it for several years.

Bernadette suffered from various illnesses in the years after the visions, and they delayed her entrance into a religious order. Finally, at the request of the local bishop, the Sisters of Nevers accepted her into the Convent of Saint-Gildard. Her illnesses only increased, and on April 16, 1879, she died at the convent’s infirmary. Her body was allowed to remain on view for three days, and many came to venerate it. On April 19 it was placed in a coffin and sealed in the presence of a number of witnesses. With permissions secured, May 30, 1879, Bernadette’s coffin was transferred to the chapel of Saint Joseph, at the convent. In September 1909 her coffin was opened, and her body was discovered to have remained uncorrupted. This phenomenon, of course, added to her reputation. Her body can be seen today in the Nevers chapel.

The spring at the grotto became the site of a growing number of cures and continues to flow to the present day. Thousands of cures have been claimed, although only a minuscule number have passed the very strict standards of the medical bureau that was established to examine the more spectacular cases and pronounce them medically unexplainable. The small chapel originally built at the grotto eventually had a basilica erected over it. A nearby church, the Basilica of Saint Pius X, was dedicated by Angelo Cardinal Roncalli (later known as Pope John XXIII) during his years as Papal Nuncio to France. It can accommodate a crowd of thirty thousand. Bernadette was canonized in 1933 by Pope Pius XI.

Carrel, Alexis. The Voyage to Lourdes. New York: Harper, 1950.
Cranston, Ruth. The Miracle of Lourdes. New York: Image Books, 1988.
Laurentin, René. Meaning of Lourdes. Dublin: Clon-more and Reynolds, 1959.
Neame, Alan. The Happening at Lourdes: The Sociology of the Grotto. New York: Simon and Schuster, 1967.
Taylor, Therese. Bernadette of Lourdes: Her Life, Death and Visions. London: Burns & Oates, 2003.
The Encyclopedia of Religious Phenomena © 2008 Visible Ink Press®. All rights reserved.
The following article is from The Great Soviet Encyclopedia (1979). It might be outdated or ideologically biased.

a city in southwestern France at the foot of the Pyrenees in the department of Hautes-Pyrenees. Population, 18,000 (1968). Railroad junction. Lourdes has marble quarries and mineral springs.

In the 19th century, Lourdes became a place of pilgrimage (the cult of the Virgin Mary) because of a legend propagated by the Catholic Church about a “miraculous appearance of the Virgin” (in 1858) to Bernadette Soubirous, a 14-year-old inhabitant of Lourdes (canonized in 1933) and about the allegedly miraculous powers of a spring not far from the spot where the “miracle” occurred. E. Zola’s novel Lourdes (1894) exposes the deception practiced upon the pilgrims (chiefly invalids hoping for a miraculous recovery in Lourdes) by the clergy and by enterprising businessmen enriching themselves from religious fanaticism.

In 1958, on the occasion of the 100th anniversary of the “miracle at Lourdes,” celebrations were held there with the participation of the higher clergy, clerical organizations, and governmental and military figures from the NATO countries. There are a number of cult monuments in Lourdes, including the huge underground Basilica of Pius X (capacity, 20,000 people; completed in 1958; architect, P. Vago).

a town in SW France: a leading place of pilgrimage for Roman Catholics after a peasant girl, Bernadette Soubirous, had visions of the Virgin Mary in 1858. Pop.: 15 203 (1999)
Collins Discovery Encyclopedia, 1st edition © HarperCollins Publishers 2005

Feedback
Flashcards & Bookmarks ?
Please log in or register to use Flashcards and Bookmarks. You can also log in with
Flashcards ?
My bookmarks ?
+ Add current page to bookmarks
Mentioned in ?
References in periodicals archive ?
In Lourdes, France, hundreds of devotees, pilgrims, and tourists traditionally gather at the basilica that was constructed at the site of the apparitions, as well as at the miraculous well, where healing of both the body and the spirit have been reported.
Feast of Our Lady of Lourdes
"It is Our Lady of Lourdes hospital and we will not let this proud and treasured name be changed.
1,000 IN HOSPITAL NAME CHANGE DEMO; Mayor leads fight to resist Lourdes rebrand
What they used to say of Golda Meir, and later of Margaret Thatcher, past prime ministers of Israel and the United Kingdom, respectively, we can say the same of Lourdes Mangaoang, with apologies for the graphic words: 'In a world dominated by powerful men, she was the one who had the balls...' And, we might add, perhaps ones made of steel, stronger than the one used to make the magnetic lifters.
One brave woman
"You'll Never know How Much I Love You Love You Love You Lourdes Maria Ciccone Leon!" she said.
Madonna cuddles up to daughter Lourdes as singer's eldest celebrates 22nd birthday; The singer said her eldest child was the "light of my life" alongside a picture shared with her 12 million Instagram followers
While Madonna didn't mention her daughter walking the catwalk on social media, she did post a candid shot to her Instagram Story of Lourdes flicking off the camera.
Madonna's daughter leaves little to the Imagination ...during NYFW runway show
As well as being a friendly face, Kate and the other young volunteers help pilgrims to the Lourdes grotto for religious ceremonies up to three times a day during the week-long trip.
'Lourdes is a magical place ... you make friends for life there' as 1,200 pilgrims depart liverpool for lourdes, the echo meets two dedicated volunteers who help make the journey possible
Heading to Lourdes on the Jumbulance will be a big undertaking for all involved.
Raising cash for Lourdes pilgrims
The first Lourdes "miracle" in 1858, pregnant Catherine Latapie, 38, fell from a tree and paralysed two of her fingers while breaking her fall to save the baby.
Making a miracle.. CHURCH SAYS CRIPPLED NUN WAS CURED BY LOURDES
Lourdes attracts around 5 million visitors annually and has been a place of pilgrimage since 1858, when 14-year-old St.
Security increases for Lourdes
The resemblance is uncanny when you compare pictures of Lourdes with a young Madge in 1979.
Spitting iMadge
Washington, June 24 ( ANI ): Madonna recently threw a pre-prom bash for her teen daughter Lourdes to celebrate the end of her high school career.
Madonna organizes pre-prom bash for daughter