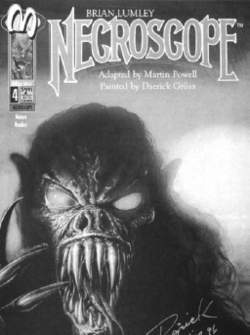 The Necroscope comic book was based on the Brian Lumley novel of the same name.

Brian Lumley, author of the Necroscope series of vampire books, was born on December 2, 1937, in Horden, Durham, England. Trained as a lawyer, he joined the British army in the 1950s and served in Germany and in Cyprus. He was in Cyprus when he began to write seriously, and the island inspired his first professional short story, “The Cyprus Shell.” It and others were collected to make his first book, The Caller of the Black, published by Arkham House in 1970. Arkham House specialized in books in the H. P. Lovecraft horror tradition. Lumley adopted the Lovecraft myth of cthulhu, the idea of ancient demonic forces that had been pushed aside by the forces of civilization but lay just beneath the surface of civilization awaiting any opportunity to return to power. This myth stood behind his first novels, The Burrowers Beneath (1974) and Beneath the Moors (1974), and most of his subsequent writings.

In 1986 Necroscope was published, the first book in what has become one of the most popular series of vampire books. The series tells the story of Harry Keogh, a necroscope (someone who can speak to the dead). Scottish-born Keogh was the son of a psychic-sensitive Russian émigré. As he grew up, he discovered that he not only had his mother’s sensitivity, but that his psychic talents were even more extraordinary. He was able to contact the dead in their graves. In Lumley’s alternative world, the dead moved into a new state of immobility and incorporeality, but retained a continued existence through conscious mental processes. Their relationship to Keogh allowed them an outlet to the world. Thus, they loved and respected him.

Keogh’s talents pushed him into the world of espionage. He was pitted against Boris Dragosani, a ghoulish necromancer who dissected dead bodies with his hands to gain information by holding their various body parts. Dragosani killed the head of the psychic branch of British intelligence to gain the secrets of their work with people of psychic ability. Keogh decided he had to kill Dragosani, but at the time was unaware of the real threat; Dragosani had developed a relationship with a powerful vampire named Thibor Frenczy. The battle with Frenczy and Dragosani became the prelude to an ongoing battle with the vampiric world that unfolded in the subsequent volumes of the Necroscope series—Vamphyri! (1988), The Source (1989), Deadspeak (1990), and Deadspawn (1991). The story continued in a second series, Vampire World, three volumes of which appeared. Lumley continued to work on his vampire mythos through 2001 and then took a break for several years but has continued with two volumes in 2009. In these later volumes, Harry Keogh’s place has been taken by a new necroscope, Scott St. John. The entire Necroscope library currently consists of some fifteen volumes, including the collections of related short stories.

Feedback
Flashcards & Bookmarks ?
Please log in or register to use Flashcards and Bookmarks. You can also log in with
Flashcards ?
My bookmarks ?
+ Add current page to bookmarks
References in periodicals archive ?
Celebrities who support Animal Defenders International's campaign include Ricky Gervais, Joanna Lumley, Brian Blessed and Sara Pascoe.
Fur Free Friday
He was asked if he wos uld produce a doodle for an annual event called National Doodle Day and his work is now on their website in the celebrity gallery alongside doodles by a host of stars including Dame Helen Mirren, Sir Ben Kingsley, Rolf Harris, Joanna Lumley, Brian May and Sir Terry Wogan.
BrushStrokes
The other games - David Keddie against Nick Edwards, Stuart Oliver against Bill Lumley, Brian Corner against John Eagers, and Peter Czerwinski against Gregory Bailey - all finished as draws.
Fourth piece of silverware eludes Huddersfield team
Encyclopedia browser ?
Full browser ?
CITE
Site: Follow: Share:
Open / Close