Also found in: Dictionary, Thesaurus, Medical.
Related to Lysosomes: mitochondria, endoplasmic reticulum, Peroxisomes
The following article is from The Great Soviet Encyclopedia (1979). It might be outdated or ideologically biased.

structures in animal and plant cells, 0.25–0.50 microns in size, that contain about 40 enzymes capable of decomposing (lysing) proteins, nucleic acids, polysaccharides, and lipids.

Lysosomes were discovered in 1955 by the Belgian biochemist C. De Duve. They are characterized principally by the presence of enzymes of the acid hydrolase group and by a single-layered lipoprotein membrane that protects the compounds in the cell from the destructive action of the lysosomal enzymes. There are two main types of lysosomes: primary lysosomes, which serve as receptacles for enzymes but are not involved in intracellular digestion; and secondary lysosomes, which are associated with the lytic processes. Secondary lysosomes form by the merger of primary lysosomes with vacuoles containing material used for digestion. They include cytolysosomes, in which the cell components proper are digested—a process called autophagy. 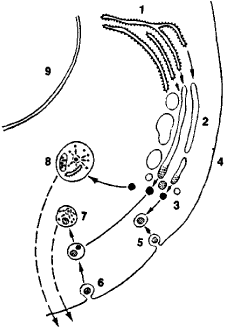 Lysosomes have digestive, protective, and excretory functions in the cell. Their role in intracellular digestion is especially pronounced in cells capable of pinocytosis and phagocytosis. Lysosomes also play a role in a number of physiological processes requiring the lysis of cell structures, such as the postpartum involution of the uterus; the protection of the cell from bacteria, foreign bodies, and chemical substances; inflammatory and immunological reactions; and dystrophy and necrosis. The development of systemic lupus erythematosus, rheumatism, rheumatoid arthritis, a number of diseases of the liver and kidneys, and malignant neoplasms is associated with the action of lysosomal factors.

Feedback
Flashcards & Bookmarks ?
Please log in or register to use Flashcards and Bookmarks. You can also log in with
Flashcards ?
My bookmarks ?
+ Add current page to bookmarks
Mentioned in ?
References in periodicals archive ?
Effects of Alcohol Consumption on the Lysosomes. Strong evidence suggests that alcohol consumption can alter the activities of lysosomes.
Intracellular proteolytic systems in alcohol-induced tissue injury
Once this had occurred, lysosomes were sent back toward the nucleus, mTOR was activated by RHEB, and cellular processes were switched back on.
Could baking soda improve cancer treatment?
In this regard, in a PD model involving overexpression of an aggregation-prone asynuclein and of TPPP/p25a, a microtubule-binding protein involved in [alpha]-synuclein-aggregate formation, [alpha]-synuclein was localized to autophagosomes since it colocalized with autophagy markers LC3 and p62/SQSTM1, but these autophagosomes did not fuse with lysosomes. This study showed that TPPP/p25a impaired autophagic flux at the lysosomal fusion level and induced [alpha]-synuclein secretion, similarly to autophagic-flux inhibitor treatment.
Autophagy and Its Role in Protein Secretion: Implications for Cancer Therapy
Specifically, Rab5 regulates early endosome uptake and fusion; Rab7 is required for initiation of early-to-late endosome transition, facilitation of late endosome maturation, and crosstalk between endosomes and autophagosomes.[10] Activation of Rab5 contributes to APP-induced axonal blockage,[11] while Rab7 knockdown blocks the fusion of autophagosomes/endosomes with lysosomes.[12] Abnormal expression of Rabs has been observed in some neurodegenerative disorders, such as Charcot-Marie-Tooth type 2B, dementia with Lewy bodies, mild cognitive impairment, and AD;[13],[14] however, the mechanisms by which Rabs participate in EAL pathway dysregulation in AD have yet to be elucidated.
Distinct Rab7-related Endosomal-Autophagic-Lysosomal Dysregulation Observed in Cortex and Hippocampus in APPswe/PSEN1dE9 Mouse Model of Alzheimer's Disease
'The lipid part was necessary to be able to pass through membranes in the cell so that it could end up in phagosomes and lysosomes,' says Buter.
University of Groningen: 'Heartburn inhibitor' helps tuberculosis bacteria survive
"It's been long known that these modifications happen in long-lived proteins, but no one has ever looked at whether these modifications could prevent the lysosomes from being able to break down the proteins," he said.
What Causes Alzheimer's Disease? New Theory
And in an acidic environment, lysosomes move mTOR away from the nucleus.
This Kitchen-Cabinet Cure for Cancer Also Fights Autoimmune Disorders
The process, known as autophagy, delivers the waste to cell compartments called lysosomes. These contain different types of enzymes for digesting and breaking down the various materials.
Cancer: Using cell metabolism to fight stubborn tumours
The findings showed that the common over-the-counter medication decreases amyloid plaque, major signs of Alzheimer's disease, pathology in mice by stimulating lysosomes, the component of animal cells that help clear cellular debris.
Aspirin might reduce Alzheimer's symptoms
However, it has been found that a link between aspirin and Alzheimer's disease decreases amyloid plaque pathology in mice by stimulating lysosomes.
Aspirin may reduce Alzheimer's disease, finds study