see immunityimmunity,
ability of an organism to resist disease by identifying and destroying foreign substances or organisms. Although all animals have some immune capabilities, little is known about nonmammalian immunity.
..... Click the link for more information. .
The Columbia Electronic Encyclopedia™ Copyright © 2013, Columbia University Press. Licensed from Columbia University Press. All rights reserved. www.cc.columbia.edu/cu/cup/

An enyme that was first identified and named by Alexander Fleming, who recognized its bacteriolytic properties. It has been designated muramidase, since it is known to facilitate the hydrolysis of a β-1-4-glycosidic bond between N-acetylglucosamine and N-acetylmuramic acid in bacterial cell walls; it also hydrolyzes similar glycosidic bonds in fragments of chitin. The most detailed studies have been performed on hen egg-white lysozyme, because this product is readily available. However, enzymes possessing lysozyme activity have been found in bacteria, bacteriophages, and plants and in human leukocytes, nasal secretions, saliva, and tears. The three-dimensional structure of the protein has been defined by x-ray crystallography. Additional data are available for the amino acid sequence of human lysozyme and also for a bacteriophage lysozyme. These results have given rise to speculation concerning the origin of the lysozyme gene during evolution.

Certain enzyme functions appear to be widely distributed in nature. The amino acid sequences of proteins possessing these functions reflect changes that have occurred in the course of evolution. The structures of lysozymes from three sources, distant in evolution, have been carefully examined. Hen egg lysozyme has no structural elements in common with bacteriophage lysozyme. Thus it must be concluded that these two enzymes emerged in evolution completely independent of each other. Preliminary studies of the structure of human lysozyme reveal considerable similarity to the structure of hen egg lysozyme. In fact, the resemblance is so great that it can be concluded that these proteins evolved from the same gene and have an essentially identical mechanism of action.

The amino acid composition of α-lactalbumin, a protein in cow's milk, is quite similar to that of hen egg lysozyme; nearly half of the amino acid positions in these two proteins are identical. It is postulated from a comparison of the amino acid sequences of hen egg lysozyme, human lysozyme, and α-lactalbumin that a “deletion” occurred during evolution in the α-lactalbumin gene with a resulting loss of information for two amino acids near position 13. In addition, positions 10, 12, and 19 in human lysozyme and α-lactalbumin are identical, so it is possible to see remnants of a common ancestral gene in all three proteins. These data illustrate the manner in which amino acid sequence information is being used as a molecular reflection of the paths of evolution. See Enzyme, Proteins, evolution of

muramidase; an enzyme of the hydrolase class that destroys the cell walls of bacteria, causing the cells to dissolve (lyse).

In the body, lysozyme acts as a nonspecific antibacterial barrier, especially at points of contact with the external environment (tears, saliva, and nasal mucosa). It was first discovered in 1922 by A. Fleming in mucus from the nasal cavity and was subsequently found in many tissues and fluids of the human body (cartilage, spleen, leukocytes, and tears), in plants (cabbage, turnip, radish, horseradish), in certain bacteria and phages, and, in the greatest quantities, in egg white. Lysozymes from different sources differ in structure but are similar in action. The lysozyme of egg white was the first enzyme to have its three-dimensional structure established by X-ray diffraction analysis and the first for which a connection was established between structure and mechanism of action (1965). These investigations made substantial contributions to the understanding of the mechanisms of enzyme catalysis in general.

Lysozyme is a protein with a molecular weight of about 14,000. Its single polypeptide chain, which consists of 129 amino acid residues, is wound into a compact globule (30 X 30 X 45 A). The three-dimensional conformation of the polypeptide chain is supported by four disulfide bonds (—S—S—). The lysozyme of human milk has three such bonds; goose egg white, two; and phage T4, none. The more disulfide groups, the more stable but the less active the lysozyme.

The lysozyme globule consists of two parts divided by a fissure; in one part, the majority of the amino acids (leucine, isoleucine, tryptophan) contain hydrophobic groups; in the other, most of the amino acids (lysine, arginine, aspartic acid) have polar groups. The surrounding polarity influences the ionization of the two carboxyl groups (—COOH) at the surface of the molecule’s fissure from different sides (see Figure 1). 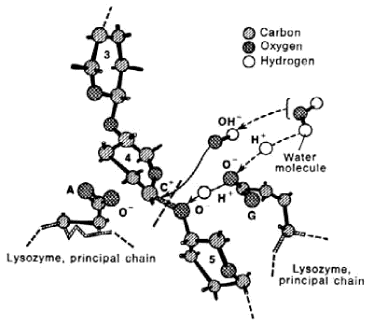 Figure 1. Mechanism of hydrolysis of a polysaccharide by lysozyme, showing three of the six rings located in the fissure of the enzyme. The glycoside bond between rings 4 and 5 is activated by the interaction between the aspartic (A) and glutamic (G) radicals of the principal lysozyme chain, on the one hand, and the carbon atoms of ring 4 and the oxygen bonding rings 4 and 5, on the other. After rupture of the bond, the two parts of the substrate molecule are released and the enzyme is ready to break down the next section of the polysaccharide chain.

Lysozyme acts on one of the principal components of the bacterial wall—a complex polysaccharide that consists of two types of amino sugars. The polysaccharide is sorbed on the lysozyme molecule in the fissure at the hydrophobic-hydrophilic boundary in such a way that six amino sugar rings are bonded to the enzyme while one of the glycoside bonds uniting them (between the fourth and fifth rings) ends up between the carboxyls. Because of the interaction between the lysozyme carboxyls and the atoms forming the glycoside bond and because of the distortion of the valence angles of the substrate, the bond is activated and broken. This leads to the destruction of the membrane of the bacterial cell.

Lysozyme preparations are used in treatment of the eyes, nasopharynx, and gums, for burns, and in obstetrics.