, Mephisto
a devil in medieval mythology and the one to whom Faust sold his soul in the Faust legend
Collins Discovery Encyclopedia, 1st edition © HarperCollins Publishers 2005 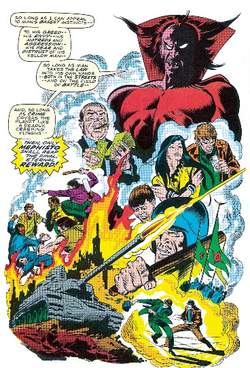 (pop culture)
Sometimes called the Lord of Evil and the Prince of Darkness, Mephisto was created by Stan Lee and John Buscema in The Silver Surfer #3 (1968). Viewing worldly events through the iridescent haze of his brazier-spawned “mystic vapors,” Mephisto is appalled by the nobility of the irreproachable Silver Surfer, the allegorical fallen angel banished to Earth by his former master Galactus. Fearing the Surfer's attributes (“Your courage—your purity—your lack of malice—pose and intolerable challenge to me— and to all I stand for!”), Mephisto attempts to seduce the Surfer with promises of wealth and power. The Prince of Darkness fails to corrupt the Surfer's indomitable soul, even when using the Surfer's beloved Shalla Bal as a pawn. Envisioned as the antithesis of the virtuous Silver Surfer, Mephisto is Marvel Comics' proxy for Satan. “I didn't want to hit the reader over the head with religious implications,” explained Lee in his book Bring on the Bad Guys (1976). Wishing to maintain uncertainty over Mephisto's actual identity, Lee “settled for a name which certainly had the sound of Mephistopheles, but we weren't quite coming out and saying it. Besides, Mephisto is easier to spell.” Mephisto rules the Stygian Deep, his “hell” dimension or “Hades” realm. A demonic, redskinned figure clad in hellish crimson, he may not be “the” Satan, but he has led many to believe that he is from his first appearance, when he lusted over the triumph he shall reap come Armageddon. Mephisto is virtually indestructible; possesses superhuman strength and stamina; can distort reality; is able to vanish, teleport, fly, and grow to gargantuan height; and can hurl earth-quaking blasts. He covets the souls of others, but can only possess them with the compliance of his victims, which he solicits via temptation and trickery. Mephisto's genesis is uncertain, although he and others have ascribed various testaments to his roots. Is he connected to the coveted power sources the Infinity Gems? Was he born of a primeval demon? Is he related to the so-called Son of Satan, Daimon Hellstrom? These and other claims, like Mephisto himself, cannot be trusted, and various theories of Mephisto's origins have been discredited. Mephisto's satanic surrogacy has been exploited by continuity-minded writers and editors, with revelations that various depictions of “the Devil” or “Satan” in some Marvel stories were actually Mephisto in disguise. The most famous instance was the union of the souls of stunt rider Johnny Blaze and the demon Zarathos into the hellspawn motorcyclist Ghost Rider, in Marvel Spotlight #5 (1972). Blaze as well as readers assumed this was the work of Satan. Mephisto's supernatural reach into the Marvel Universe has extended far beyond his initial contact with the Silver Surfer or his retrofitted connection to Ghost Rider. He has attempted to control beings as diverse as the thunder god Thor and the omnipotent wanderer the Beyonder. The Lord of Evil succeeded in briefly trapping the spirits of the Richards family (Reed, aka Mr. Fantastic, and Sue, the Invisible Woman, plus their son Franklin) in a 1985 Fantastic Four storyline, and created the sorcerer Master Pandemonium, enemy of the West Coast Avengers. He was awarded his own 1987 miniseries, Mephisto vs … , each issue pitting the chthonian supervillain against of one Marvel's superhero teams (the Fantastic Four, X-Factor, the X-Men, and the Avengers), and he allied with, then fought against, the overlord Thanos in the 1991 miniseries The Infinity Gauntlet. Two pieces of Mephisto's soul that splintered from him during his battle with the Fantastic Four were magically altered into the children of the superheroes the Scarlet Witch and the Vision, unbeknownst to them. When Master Pandemonium reclaimed these soul fragments and returned them to Mephisto in Avengers West Coast (formerly titled West Coast Avengers) #52 (1989), the children were lost to their parents. The Scarlet Witch eventually went insane from grief and turned against Marvel's heroes, resulting in the crossover events Avengers Disassembled (2004) and House of M (2005). Often perched from his stone-carved throne, Mephisto is worshipped and served by lowly demons and netherworldly creatures. He has two children, his daughter Mephista and his son Blackheart, both of whom were introduced in the late 1980s. They are by no means a happy family, as Blackheart has attempted to overthrow his father. But such is to be expected of the progeny of the character his own creator, Stan Lee, described as lacking “a single solitary redeeming quality.” Mephisto's perceived connection to Satan has dissuaded television animators and toy manufacturers from using the villain, although a sculpted mini-bust targeted toward adult collectors, the first three-dimensional depiction of Mephisto, was released for Halloween 2005.
The Supervillain Book: The Evil Side of Comics and Hollywood © 2006 Visible Ink Press®. All rights reserved.