[′myü·sə]
(electromagnetism)
An electrically steerable receiving antenna whose directional pattern can be rotated by varying the phases of the contributions of the individual units. Derived from multiple-unit steerable antenna.
McGraw-Hill Dictionary of Scientific & Technical Terms, 6E, Copyright © 2003 by The McGraw-Hill Companies, Inc. 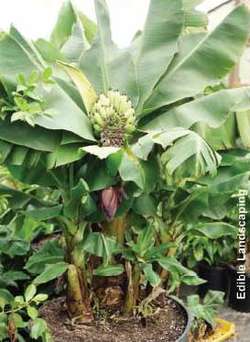 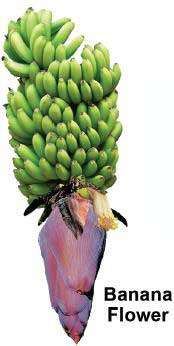 a genus of perennial plants of the family Musaceae. Tall, sometimes giant, grasses with a thick rhizome and a short stem. The leaves are very large, occurring in sheaths that form a multilayered tube (the false stalk). The young leaves, and then a cluster resembling a huge raceme, break through this tube. The flowers are unisexual and bisexual. The fruit has many seeds and is berrylike and thick-skinned; in cultivated varieties the fruit is often seedless (the plants propagate only vegetatively) and reaches 15 cm in length and 3–4 cm in diameter. As many as 300 such fruits may grow on one axis, attaining a total weight of 50–60 kg. The above-ground part of the plant dies after fruition. There are about 60–70 species in the tropics and subtropics of Africa, Asia, and Australia.

Musa is one of the oldest cultivated plants; in tropical regions it is the most important food plant and the chief article of export. The hybrid thermophilic species Musa × paradisiaca and Musa × sapientum (the dessert varieties—the so-called plantain) and the relatively cold-resistant southern Chinese Musa nana (M. cavendishii) are the most widely cultivated. The cultivated Musa consists of 40 percent skin and 60 percent mealy, sweet pulp; the seeds are not developed. The pulp of the fresh fruit contains 14–22 percent sugars, 3–8 percent starch, and up to 1.5 percent protein. The aroma of the fruit is caused by isoamyl isovaler-ate and isoamyl acetate. The fruits are used in either fresh or dried form and in the preparation of banana flour, canned fruit, marmalade, syrup, and wine. Some species of Musa have fruits with a hard, mealy, nonsweet pulp; those are used mostly as fodder and are used as food only when cooked. An industrial species of Musa is Manila hemp (M. textilis), whose false stalks provide a light, strong fiber—also called Manila hemp (abaca)—used in making ships’ rigging, fishing nets, and such. Japanese banana, or decorative banana (basjoo), is grown in the USSR on the Black Sea shores of the Caucasus and Crimea as a decorative plant. Abyssinian banana (M. ensete), now more often attributed to the genus Ensete (E. ventricosum), is grown in Africa as a food and textile plant.

Feedback
Flashcards & Bookmarks ?
Please log in or register to use Flashcards and Bookmarks. You can also log in with
Flashcards ?
My bookmarks ?
+ Add current page to bookmarks
Mentioned in ?
References in periodicals archive ?
Musa was represented by lawyer Ng Aik Guan while deputy public prosecutor Datuk Dusuki Mokhtar appeared for the prosecution.
Musa Aman succeeds in bid to have passport temporarily returned
Musa (as) said: "If you had wished, surely, you could have taken wages for it!" (18:77) At this point, Khidr ended the lesson and revealed the real interpretation of those situations which were not apparent to Prophet Musa (as).
The Story of Musa (as) and Khidr
Musa has taken baby steps but his talent promises greater heights, pending hard and consistent work.
Rookie pacer Musa aiming to be the next big thing from HBL PSL
A century later, Musa took Mali to the next level by seizing control of gold-producing regions, reconquering areas of the kingdom that had broken away, and monopolizing important trade routes.
MANSA MUSA: The 400-Billion-Dollar Man
Recently Musa had been reported as unhappy in the Zambian league and was linked with a return to Gor alongside Muguna amid reports that Kerr had turned them down citing depth in his team.
Welcome back: Musa, Muguna free to rejoin Gor Mahia as Kerr dismisses report
On Friday, Musa gave Nigeria the lead in the 49th minute after Victor Moses sprinted deep into the Iceland half and curled a cross to the near post.
Musa scores twice to give Nigeria win over Iceland
Police said that deceased Musa used to involve in various illegal activities particularly running narcotics den in the locality and also imprisoned many times of drug paddling.
Missing man found dead
Their co-defendants and friends Mohammed Rahman and Ahmed Mohamed have pleaded guilty to the offence but Osman and Musa claim the robbery was carried out without their prior knowledge.
Friends deny involvement in robbery
The MUSA method is a multi-criteria preference disaggregation approach providing quantitative measures of satisfaction analysis, considering the qualitative form of individuals' judgments.
Nonlinear Multi Attribute Satisfaction Analysis (N-MUSA): Preference Disaggregation Approach to Satisfaction
LAHORE -- Pakistan Tehreek-e-Insaf (PTI) senior leader Fawad Chaudhary on Monday has told that Former Prime Minister Yousaf Raza Gillani's son Ali Musa Gillani and PTI have reconciled following the obscure firing incident that occurred on Sunday after Ali Musa Gillani and members of PTI had blamed each other over the incident.
Ali Musa Gilani, PTI have reconciled after road altercation: Fawad Chaudhry
Jan Patrick Heiss, Musa: an essay (or experiment) in the anthropology of the individual.
Jan Patrick Heiss, Musa: an essay (or experiment) in the anthropology of the individual
Qatar will take on top Philippines team Globalport Batang Pier today in what would be a farewell match for retired Qatar star Yaseen Ismail Musa. The match will be played at the Al Attiyah Arena in Al Sadd at 7pm.
Qatar legend Musa's farewell match today