The most celebrated Inca citadel, on a promontory 2,000 feet above the valley in the Andes in Peru. The site includes buildings which surround an oblong plaza. The houses were built around courts, with stairs, windows, interior niches, narrow doorways and thatch-covered gable roofs. Some houses were carved out of the rock; some connecting stairs were hewn out of the mountain.
Illustrated Dictionary of Architecture Copyright © 2012, 2002, 1998 by The McGraw-Hill Companies, Inc. All rights reserved 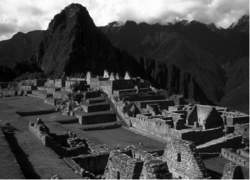 Feedback
Flashcards & Bookmarks ?
Please log in or register to use Flashcards and Bookmarks. You can also log in with
Flashcards ?
My bookmarks ?
+ Add current page to bookmarks
Mentioned in ?
References in periodicals archive ?
Within the mountains of Peru lie a wealth of ancient Inca temples but Machu Picchu is rightfully the one to go.
Peru- World in a Backpack
Because the buildings at Machu Picchu are built of the same granite as the mountain on which they stand, the whole area seems eerily prehistoric, as though the buildings actually grew out of the rock itself.
A lost city in the clouds
According to the visitors, the Machu Picchu settlement is a tale of how the people of that era used only stones to build the 'Lost City of the Incas'.
Residents glimpse Machu Picchu at Katara
The January 2010 airlift of those stranded in Machu Picchu was a quickly developing unprecedented situation that tested the U.S.
Andean adventure: vacationing employee aids stranded tourists
Thus, the Yale Expedition, without which Machu Picchu may never have been reasserted onto the world's stage, was allowed to proceed.
Cradle of Gold: The Story of Hiram Bingham, a Real Life Indiana Jones, and the Search for Machu Picchu
Dating from 1450 A.D., Machu Picchu was built for the Incan upper class.
Hike to Machu Picchu ends at 14,000 feet, tops Stairmaster pain
"The citadel is intact and we expect to open Machu Picchu on April 1," Martin Perez, Peru s trade and tourism minister, told reporters in Lima.
Peru says Machu Picchu site to reopen in April
The train is the only route to or from Machu Picchu and some 4,000 tourists were stranded for up five days in villages near the ruins.
Peru seeks tourists for Cuzco Machu Picchu gateway
Lima (Peru), July 13 (ANI): A team of archaeologists has discovered an Inca road in Peru, which was unknown until now and apparently held sacred, leading to the citadel of Machu Picchu.
Archaeologists discover previously unknown Inca road in Peru
DUST off your hiking boots and trek the Machu Picchu region of Peru for Children Today from September 18 to 27.
Trekking for charity; Your Say