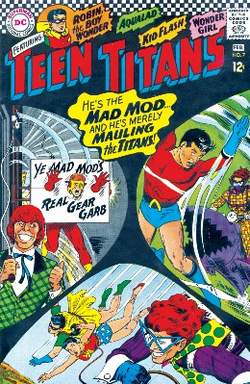 (pop culture)
The Mad Mod, the Teen Titans' (TTs) most rakish rogue, was cut from the psychedelic cloth of mid-1960s Carnaby Street fashions. The TTs discover in Teen Titans vol. 1 #7 (1967) that the smuggling ring they've tailed to London is fronted by Neil Richards, aka the Mad Mod, clothing designer for touring Brit rocker Holley Hip, a patsy whose “loverly” threads secretly conceal contraband. Once the Titans are hip to the Mod's scene, the fiendish fashion plate nearly bags them with a series of deathtraps until the TTs take the Mod to the cleaners. The brainchild of madcap scribe Bob Haney and illustrator Nick Cardy, the mop-topped Mad Mod was prescient of Austin Powers and Zoolander, decades before those parodies were born. Fads die as quickly as they rise, and after a 1968 return gig at which he stole the Queen's scepter, the Mad Mod, along with mod fashions themselves, peacocked down the runway to limbo, although in a token 1997 appearance the Mod announced that he had reformed. That same year, however, comedian Mike Myers made mod cool again with the soon-to-be-franchised spy spoof Austin Powers: International Man of Mystery. On the Italian-leather heels of Powers' third movie in 2002, a Carnaby-conscious public met the Mad Mod—“'Ello, Guv'ner!”—on television's anime-like Teen Titans (2003–2006). TV's mind-bending Mad Mod is a brazen bloke who detained the Titans in a brainwashing school (“Mad Mod,” original airdate: September 27, 2003), then tried to reclaim New York City as the property of England (“Revolution,” October 16, 2004). Rampant pop-culture references dominated both episodes, from A Hard Day's Night/Scooby- Doo–inspired musically accompanied chase scenes to pastiches of the movie A Clockwork Orange (1971), the latter of which starred Malcolm McDowell, the actor who also provided the Mad Mod's cartoon voice.
The Supervillain Book: The Evil Side of Comics and Hollywood © 2006 Visible Ink Press®. All rights reserved.

Feedback
Flashcards & Bookmarks ?
Please log in or register to use Flashcards and Bookmarks. You can also log in with
Flashcards ?
My bookmarks ?
+ Add current page to bookmarks
Mentioned in ?
References in periodicals archive ?
By the 1970s, tartan Mad Mod Vests and Hip Fringed Vests took the company into strange new territory, with a look that conjures images of lumberjacks listening to The Who.
AN ENRICHING EXPERIENCE
But for all his productivity, Daniels will be forever associated with Jimmy the mad Mod, a youth cult icon who doesn't so much revive the hard image when you speak to him as reinforce him.
Bad lad Phil hits a new stage in his long career
"`Muss' moss, miss mess, mass!" the hectic masses of the concrete jungle miss out on nature's green `muss'--"get green (knees and elbows), masses, drop out of the mad mod mess!
Vowel cascades, vowel movements and di-odes