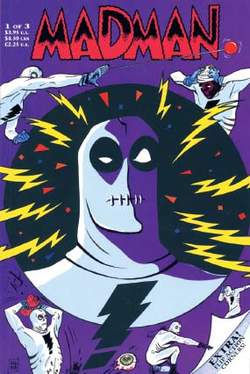 Of the scores of new superheroes introduced during the 1990s, Michael Dalton Allred’s Madman is one of the hippest and most stylish. Rendered in a simple yet expressive manner— running decidedly counter to the stoic, over-embellished, and exaggeratedly muscular style that became endemic to mainstream superhero comics—Madman’s premiere issue (Madman #1, Tundra, 1992) gave the world its first glimpse of Frank Einstein, the man behind the mask of Madman. Allred’s creation, beautifully colored by his wife Laura, was one of the first superheroes designed for the ironic sensibilities of twenty-something postmodern comics readers—an audience that would undoubtedly show little interest in standard superhero fare.

Reanimated after death by Dr. Egon Boiffard and Dr. Gillespie Flem, a pair of mad scientists worthy of inclusion in the cast of Buckaroo Banzai, the man destined to become Madman awakens with almost no memories. Unable to recall his real identity, he adopts the name Frank Einstein (which sounds a little like “Frankenstein” if spoken too quickly); he also finds himself gifted with unpredictable psychic powers (including prophetic dreams and an intermittent sense of danger or security that Einstein describes as “spiritual inner eye awareness”), heightened agility, an apparently instinctual ability to survive being attacked, and an irrational hatred for beatniks. Clearly, Einstein’s life isn’t as simple as that of most mainstream superheroes. For starters, he is full of unanswered (and perhaps unanswerable) questions about his identity prior to his death. And being a reanimated corpse, he is rather unattractive. Einstein’s personal insecurities and neuroses drive him to garb himself in a pajama-like white costume with a red lightning bolt/exclamation point motif; the outfit includes a white mask, intended for vanity’s sake rather than for the protection of a secret identity. Despite his extraordinary abilities and his mask—worn only to bolster Madman’s poor self-esteem—Einstein does not think of himself as a superhero.

After Dr. Boiffard dies at the hands of Mon-stadt, a lunatic seeking immortality, Einstein embarks on a desperate quest to restore life to his friend and benefactor, while also fighting to rescue his girlfriend, Joe (Josephine Lombard), and Dr. Flem from some menacing monsters. Succeeding in his mission, Einstein discovers his innate propensity for heroism, and begins routinely defending Snap City—an ultrahip metropolis that lies somewhere between the 1939 World’s Fair retro-futurity of Scott McCloud’s Zot! and the skyline of the Mort Weisenger-era Superman (not to mention Allred’s own post-Grunge Pacific Northwest milieu)—from every imaginable super-menace. Because of his death-addled memory, Snap City is the only place Einstein can even vaguely remember having called home; he loves the town, describing it as “a groovy place where just about anything can happen.”

Immediately dubbed “the Madman of Snap City” because of his weird, corpselike appearance and his strange turns of phrase (fairly typical of Einstein are such utterances as “Meanies never win. And you can quote me on that.”), Einstein finds himself regularly squaring off against rogue robots, late-show monsters (including a vomit-beast known as the Puke), and crazed beatniks, with a little help from gal-pal Joe and an alien called Mott (a native of the planet Hoople, a reference to one of Allred’s favorite 1970s bands). Unlike virtually anyone else in the superhero trade, his signature weapons include a hollowed-out, lead-filled Duncan yo-yo and a slingshot, lending a fair amount of credence to the “Madman” moniker.

After producing six issues of Madman in a 1992 series for small-press publishers Tundra and Kitchen Sink (winning the 1993 Harvey Award for Best New Series), and three issues of Madman Adventures for Tundra in 1993, Allred took his concept to Dark Horse Comics, a haven for creator-owned properties since its founding in 1985. Dark Horse furnished Allred’s stylishly bizarre hero with a much larger audience than ever before with a new series, Madman Comics, which debuted in 1994. Madman’s new outing was well received despite frequent and lengthy lapses between issues, especially toward the end of its twenty-issue run (December 2000). Madman teamed up—and briefly switched bodies— with DC Comics’ Superman in Superman/Madman Hullabaloo!, a three-issue miniseries released in 1997. Two years later, Dark Horse released Madman/The Jam, a two-issue miniseries that paired Allred and his character with another postmodern hero (with the participation of Bernie Mireault, the Jam’s creator).

After nearly dying at Monstadt’s hands in the horror-detective yarn presented in Madman Comics: The G-Men from Hell (four issues, 2000), Madman became part of Snap City’s first superhero group in The Atomics (AAA Pop Comics, 2000). Allred wrote and drew this title with obvious affection for the Silver Age (1956–1969) artistic powerhouse Jack Kirby, though filtered through a postmodern, somewhat tongue-in-cheek lens. In The Atomics, Madman finally makes peace with the beatniks he has fought over the years, and helps change several of them from alien spore-infected mutants into a fledgling team of mismatched heroes, nostalgically reminiscent of early issues of Marvel Comics’ Fantastic Four or Avengers. Among Madman’s new super-companions are the stretchable Mister Gum (better known by Snap City’s populace, unfortunately, as the Booger), the Slug (a purple mutant with protuberant eyestalks), the Iron Man-like Metalman, and the enigmatic and acne-afflicted teenage time-traveler known as Zap-Man. The Atomics concluded its run in 2001 after fifteen issues.

Unable to remain within the confines of comics and trade paperback reprints, Madman’s likeness has found its way onto T-shirts, candy bars, lunch boxes, action figures, and even Zippo lighters. Hollywood has also taken notice of the character, with the release of G-Men from Hell (2000), a Madman-based film directed by Christopher Coppola (brother of actor Nicolas Cage and nephew of director Francis Ford Coppola), from a screenplay written by Richard L. Albert and Michael Allred himself. Various Atomics characters, and Madman himself, have returned for one-shots from 2002 to the present, and another, big-budget Madman film from director Robert Rodriguez has been in development since the early 2000s. —MAM

Feedback
Flashcards & Bookmarks ?
Please log in or register to use Flashcards and Bookmarks. You can also log in with
Flashcards ?
My bookmarks ?
+ Add current page to bookmarks
Mentioned in ?
References in classic literature ?
One, the cleverest and most celebrated among them, took me aside, and bidding me prepare for the worst, told me--me, the madman!-- that my wife was mad.
I kept it down; and no one knew I was a madman yet.
They know what a clever madman I have been, and they are proud to have me here, to show.
'It was a fine struggle that; for he was a tall, strong man, fighting for his life; and I, a powerful madman, thirsting to destroy him.
'The door was suddenly burst open with a loud noise, and a crowd of people rushed forward, crying aloud to each other to secure the madman.
View in context
"Ay, the old Madman has got the best collection in the house, out and out," said Tom; and then Martin, warming with unaccustomed good cheer and the chance of a convert, launched out into a proposed bird-nesting campaign, betraying all manner of important secrets--a golden-crested wren's nest near Butlin's Mound, a moor-hen who was sitting on nine eggs in a pond down the Barby road, and a kingfisher's nest in a corner of the old canal above Brownsover Mill.
"Well, old Madman, and how goes the bird-nesting campaign?
View in context
"Peace, I say again, Sancho," said Don Quixote, "for let me tell thee it is not so much the desire of finding that madman that leads me into these regions as that which I have of performing among them an achievement wherewith I shall win eternal name and fame throughout the known world; and it shall be such that I shall thereby set the seal on all that can make a knight-errant perfect and famous."
"Have I not told thee," answered Don Quixote, "that I mean to imitate Amadis here, playing the victim of despair, the madman, the maniac, so as at the same time to imitate the valiant Don Roland, when at the fountain he had evidence of the fair Angelica having disgraced herself with Medoro and through grief thereat went mad, and plucked up trees, troubled the waters of the clear springs, slew destroyed flocks, burned down huts, levelled houses, dragged mares after him, and perpetrated a hundred thousand other outrages worthy of everlasting renown and record?
View in context
Linda said: "He's just an evil, madman. I hope to God they don't decide in 15 years to give him another chance.
Why are you giving killers a 2nd chance? Victim blasts 'soft' justice that allowed convicted murderer free to attack her
They put closed signs in their windows and never sold a single weapon ever again and the reason was that they knew that if they had sold such guns to a madman that they too would been morally responsible!
UK arms sales just hideous; LETTERS
According to him, the suspect identified as Dele has been pretending to be a madman for some weeks and was suspected to be a kidnapper.
Madman suspected to be kidnapper, smashes mobile phone after N1.5m alert