West, Mae, 1893–1980, American stage and movie comedienne, b. Brooklyn, N.Y., as Mary Jane West. The unparalleled mistress of double entendre, West began in burlesque and continued in vaudeville, stage, and films, making a career of self-admiration and treating sex with broad humor. As a result, she was constantly battling against the Production Code (see motion pictures). Many of her one-liners, such as “Come up and see me sometime,” have become classics. Her plays include Sex (1926) and Diamond Lil (1928). Among her films are She Done Him Wrong (1933) and My Little Chickadee (1940). 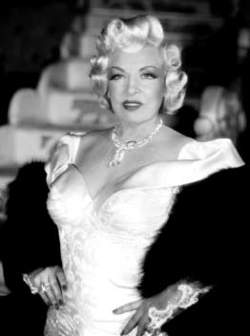 Mae West, film and stage actress, called on spirits for inspiration when writing her own scripts and plays. Baron/Qetty Images.

Mae West was born August 17, 1893, in working class Brooklyn, New York. She was her parent’s first child. Her father was the boxer “Battlin’ Jack West,” and her mother Matilda was a corset model. Her mother exerted a profound influence on Mae, instilling generous amounts of self-confidence and ambition and pushing her onto the vaudeville stage at age seven as “Baby Mae—Song and Dance.” Mae quit school after the third grade, and for the next two decades lived the rough-and-tumble life of a stage performer, appearing on Broadway and vaudeville and burlesque stages across the country. She gained national notoriety in 1928 for writing and staging her play Sex in New York, which led to her widely publicized trial on obscenity charges, culminating in one week of incarceration and a lifetime of fame. After several more controversial plays, she was signed by Paramount Pictures in 1932, where her phenomenal success is credited with keeping the studio solvent.

In 1948, West was appearing in Diamond Lil at the Prince of Wales Theater in London. She sent a note to British voice medium Leslie Flint asking for a sitting with him. The séance was to take place at her suite in the Savoy Hotel, after her evening performance. Mae West’s business manager, Mr. Timonye, escorted Flint to the suite. As Flint described it, “[Mae West] came over to sit beside me and we talked about her films, all of which I had seen and enjoyed. Shortly Mr. Timoney shepherded the anonymous show business gentlemen out of the apartment and I was alone with her. Anti-climactic it may be but we went on talking and soon we were discussing psychic matters … she had spent years reading widely in the fields of psychic research and comparative religion before finding her own truth in Spiritualism and then through meditation and self-discipline developing psychic power of her own.”

A variety of spirits spoke to Mae West during the Flint séance, including her mother Matilda, who had died in 1930. She and her mother spoke affectionately for a long time during which Mae tested the spirit with mention of a particular pet she had. Her mother correctly named it and also gave Mae other evidential information, including her mother’s maiden name of Doelger. After that initial sitting, Mae West had many other séances with Leslie Flint, several at his home in Hendon, London. In 1949, Leslie Flint went to America and again met with Mae West at her home in the Ravenswood Apartments, Hollywood, California

Mae West was an ardent Spiritualist and visited the Spiritualist community of Lily Dale, New York many times. Her favorite medium there was Jack Kelly. After Kelly’s death, Mae claimed that his spirit appeared to her, dressed in a tuxedo. Another of her psychics was Kenny Kingston, in Hollywood, who said that he knew that the spirit world was Mae’s first priority. Kingston recalls one occasion, “At the theatre, she’d invite me back to her dressing room for a brief séance … She’d planned on the séance; wanted psychic messages about her career.”

Emily Leider, author of Becoming Mae West (1997), acknowledged Mae’s fascination with the spiritual. “Mae felt herself drawn back into the world of Spiritualism, which promised contact with the dead. At a resort called La Quinta, which was frequented by Paramount executives, she met Amelia Earhart, who shared this mystical bent. Mae had long admired Earhart for her courage and her mastery of the sky, ‘a man’s world’ … and the two pioneers—one in aviation, the other in sexuality—talked about their mutual interest in psychic explorations … After the séance with Amelia Earhart, Mae concentrated on developing her psychic powers. Each day she retreated to a dark room, where she sat, meditating, on a straight back chair, placing her hands on her knees.”

Mae wrote the first five screenplays in which she starred, plus all of her stage shows. She wrote them by inspirational writing. She claimed that she had nothing to do with the formulation of the plots. Kenny Kingston explained, “She was a natural psychic. She went to the spirit world for all her answers. She had enormous depth of spirit. She could write screenplays in three or four days by dictating to stenographers while she lay in a trance.” He went on to say, “When she was upset that no one had been able to come up with a script idea, she had walked about her room saying, ‘Forces, Forces, come to me and help me write a script.’ She would begin to hear voices and images, as the plot was revealed to her. Mae would summon stenographers to work with her around the clock, as she would lie in bed in a trance-like state, dictating as the spirits entered.”

In August of 1980, Mae suffered a stroke. Friends tried to cheer her up by bringing her old movies and gramophone records to the hospital room. Later that year, she had a relapse, slipped into unconsciousness and died on November 22.

An inflatable life jacket worn over clothing and covering the upper part of the body. It serves as a survival aid in case of ditching or ejecting over the sea. See life jacket.
An Illustrated Dictionary of Aviation Copyright © 2005 by The McGraw-Hill Companies, Inc. All rights reserved

(1892–1980) actress personified as a vamp; known for her famous line, “Come up and see me some time.” [Am. Cinema: Halliwell, 759]
See: Flirtatiousness
Allusions—Cultural, Literary, Biblical, and Historical: A Thematic Dictionary. Copyright 2008 The Gale Group, Inc. All rights reserved.

(1893–1980) actress; born in Brooklyn, N.Y. Starting in vaudeville, she appeared on Broadway (1911–28) before becoming a film star in the 1930s. She wrote much of her own dialogue, replete with sexual innuendo. A mistress of comic timing, she was a sultry siren who befuddled her co-stars—Cary Grant in She Done Him Wrong and W. C. Fields in My Little Chickadee. The "Mae West" life-jacket is named after her buxom figure.
The Cambridge Dictionary of American Biography, by John S. Bowman. Copyright © Cambridge University Press 1995. Reproduced with permission.

Feedback
Flashcards & Bookmarks ?
Please log in or register to use Flashcards and Bookmarks. You can also log in with
Flashcards ?
My bookmarks ?
+ Add current page to bookmarks
Mentioned in ?
References in periodicals archive ?
• • Website for all things Mae West: http://MaeWest.blogspot.com
Meet the Real Mae West: New Yorker, Vaudevillian, Upstart, and Jailbird
For instance, the shaped canvases of 1936, their frames conforming to anatomical contours, might be perceived as unexpected foreshadowings of Frank Stella; and the Mae West Lips Sofa of 1938 would look quite at home in a Claes Oldenburg retrospective.
Salvador Dali: Philadelphia Museum of Art
In a way, burlesque has given women like Dixie, women like me, women like Mae West a platform where we can live and be bigger than life and be ourselves and play, have fun.
The anatomy of burlesque: the embodied passion of Lindalee Tracey
Who do you think you have to be to marry someone like Mae West? Rockefeller?
West-Ward Ho! (Here Below)
Items sought include, but are not limited to: uniforms, uniform badges and patches, photos, books and newspapers about units (to include logs, diaries, year-books, letters, unit and ship histories, etc.), vehicles, aircraft, radio and radar equipment, navigation equipment, Mae West life jackets, life rafts, flight clothing, and other aviation equipment.
Aircraft Museum seeks donations, invites visitors
A former Twyla Tharp dancer, Carrafa arranged the musical numbers in Dirty Blonde, which pays homage to Mae West and her pioneering sexual frankness.
In Defense of the Bump and Grind
The movies themselves were heavily censored for politics and sex, but radical writers and directors still managed to slip through some of the funniest lines (as in Mae West's entendre-ridden She Done Him Wrong) and the most political plots (Charlie Chaplin's Modern Times or The Great Dictator and Frank Capra's Mr.
The Last of the Hollywood Ten
In 1939 he got into trouble over a line in the script for his film with Mae West, My Little Chickadee: "I know what I'll do, I'll go to India and become a missionary.
Fields of Glory
Others include MCI WorldCom Inc's MAE (Metropolitan Area Exchange) East in Vienna, Virginia and MAE West, in Palo Alto and the New York network access point, operated by Sprint Corp.
Compaq Sells Pacific Internet Exchange to AboveNet for $75m
Emily Wortis Leider's Becoming Mae West (Farrar Straus Giroux, 431 pp.) would have been better titled "Being Mae West." For the heroine of this somewhat distant biography seems to exist in a determined present tense.
Becoming Mae West